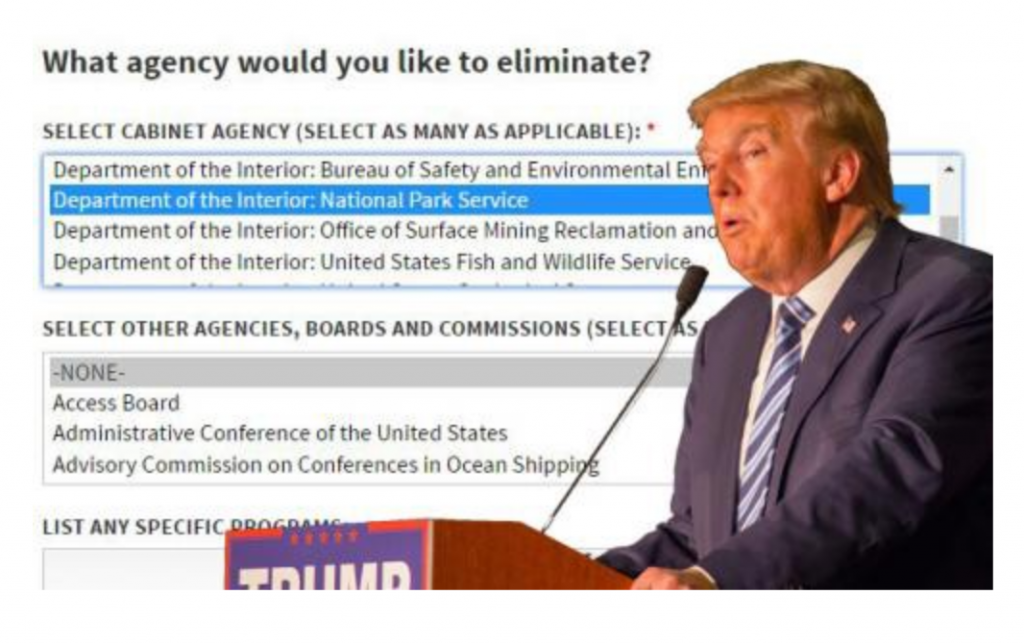 (EnviroNews DC News Bureau) — Washington D.C. — The White House has put its time and effort into developing a web page that asks if you’d like to discard what Wallace Stegner dubbed, “America’s best idea” – the National Park Service, along with any other federal agencies you don’t particularly care for.

Among other agencies you can tell Trump to do away with are the Food and Safety Inspection Service, the National Oceanic and Atmospheric Administration (NOAA), the Centers for Disease Control and Prevention (CDC), the Federal Emergency Management Agency (FEMA) and the U.S. Forest Service. The web page also allows you to select entire Cabinet departments to eliminate, such as the Department of the Interior, Department of Energy, Department of Housing and Urban Development, or any of the 15 executive departments.

Max Greenberg, writing for The Wilderness Society, stated, “The Trump Administration has again shifted its war on conservation, this time taking aim at the pillars of America’s public lands: the National Park Service and other agencies.”

The Trump Administration’s strategy was apparent in his first budget proposal, released in March, which would have cut funding for the Environmental Protection Agency (EPA) by 31 percent, the State Department by 29 percent, and 20 percent or more for each of the Agriculture, Labor and Justice departments. However, Trump was dealt a setback when Congress passed a $1 trillion budget that keeps the government largely funded at existing levels through September 30.

The President is due to release his full 2018 budget plan next Tuesday, while he is scheduled to be away on his first trip abroad. Democrats have already warned that anything closely resembling his earlier “skinny budget” proposal could lead to a government shutdown.

Trump has other means to achieve his objectives though, including not filling open positions and eliminating existing staff. As of April 22, he hadn’t nominated anyone for 85 percent of the executive branch positions requiring Senate confirmation, Business Insider reported. Meanwhile, the EPA says it is budgeting $12 million for staff buyouts and early retirement packages that will be needed to downsize the agency.

In another shocking move, Trump stiffed North Carolina victims of Hurricane Matthew. Huffington Post reported that of the $929 million in disaster aid requested by that state’s Democratic governor, Roy Cooper, Trump authorized just $6.1 million – about 0.75 percent of what was asked for. The October, 2016 hurricane left 26 dead in North Carolina and closed Interstate 95 while devastating homes, small businesses and farms. FEMA was slated for a $6.2 billion cut in Trump’s desired budget.

The White House web page will be open for input and comments until June 12. With seemingly all Cabinet departments and agencies listed, the public could just as easily choose to eliminate the U.S. Immigration and Customs Enforcement (ICE) agency, the Secret Service, or the entire Department of Homeland Security (DHS). The Department of Defense and DHS are the only two departments slated for budget increases under Trump’s earlier proposal.

Greenberg added, “The Trump administration keeps moving the goalposts on what is considered extreme behavior, but we can’t afford to let outrageous anti-public lands attacks become the new normal.” The Wilderness Society urges readers to respond, using the White House web page form, and advocating citizens to select “-NONE-“ for which agencies to be eliminated and enter comments in support of public lands.

One Response to “Trump Web Page Asks Americans if They’d Like Him to Kill the National Park Service, Forest Service”