(EnviroNews Utah via Community Watch Blog) – The Stericycle medical waste incineration plant couldn’t have picked a worse time to have another large, visible emergency episode, considering all of the recent controversy swirling around the company.

On Friday evening, a 5K race was underway in the North Salt Lake community of Foxboro when around 6:25 PM residents noticed billowing black smoke and flames atop the short emergency bypass stack at the waste plant. Many Utah residents have recently become aware that when that stack opens, it means potentially deadly and mutagenic poisons are being spewed into the environment unchecked — totally unfiltered and un-scrubbed. 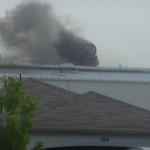 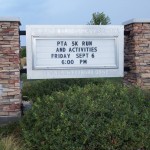 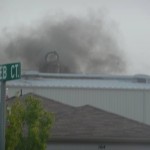 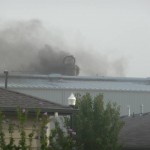 Some people literally ran for cover, as black walls of toxic soot filled the neighborhood. Alert mothers in a state of panic scrambled to find and remove their children from the thick hazy scene, hampered by low visibility.

Foxboro residents complained of a lingering, foul odor that enveloped their homes and the entire neighborhood for hours, and they ended up painting handprints in the likely poisonous ashy dust that covered the whole area.

Aaron Wiley, a father of young children and a passionate voice against Stericycle, was in the area when the bypass went down and noticed flames and smoke emanating from Stericycle’s short stack at exactly 6:20 PM. According to witnesses, he started rolling video at precisely 6:24 PM and courageously stayed in the dangerous cloud in order to capture the episode, interjecting with outspoken reminders of the levels of “mercury poison and dioxin” hitting the open environment.

Community organizer Natasha Hinks Henderson took a number of compelling pictures at 6:28 PM, and a group of witnesses testified that they saw the short stack close itself at 6:30. It should be noted that it is suspected by residents that Stericycle was bypassing at least for several minutes before Mr. Wiley noticed the episode at 6:20.

Sarah Sargent, a local resident, sent in this account to EnviroNews Utah:

Tonight my son, six years old, was playing outside when the bypass event happened. He rushed to a friend’s house because he said, ‘the cloud of dust (was) so bad he couldn’t see anything and he thought he was going to die.’ He was very shaken up.

I went outside a little bit after the huge cloud passed (I was not aware the bypass had happened till later). People who were involved in the 5k race were in a state of panic, shouting back and forth at each other. Two moms were rushing around looking for their kids, because in the giant smoke they had lost them and were unable to find them.

My entire house has had a putrid smell all evening — unlike anything I have ever smelled before.

The short bypass stack seems to act like the mouth of a deadly dragon these days, looming as citizens wait in fear and concern, wondering when the poisonous fire-breathing beast will spew its deadly flame down from its ominous lair onto the poor and unsuspecting townsfolk again.

Even though the tale of Stericycle has become almost like a scary storybook, local residents have been turning up the heat and monitoring the plant almost around the clock, ready to combat the toxic flame-breathing creature at any moment with video recorders and iPhone cameras acting as their swords.

Stericycle has been taking major heat from outraged citizens and environmental groups as of late after it was discovered that they had allegedly “cooked the books” in an effort to “fudge” stack-test results during compliance inspections.
It was later revealed that Stericycle had been out of compliance with their Title V air pollution permit for nearly two years, resulting in the organizing of emotionally charged town-hall meetings and passionate protests in front of the old waste burner.

The media has been all over it like a fly on dung, while Stericycle has remained quite speechless, frankly, willing to grant comment to no one, including even the most conservative and “bubble-gummy” of local news outlets.

A media dogpile recently occurred when it was announced that celebrity activist Erin Brockovich would be coming on board, joining the fight in what has already become an all-out campaign that presents a unified message of complete and total shutdown of the incinerator.

But just why are citizens so concerned and even outraged about this black flaming wall of ash and dust? Well, amongst the many illuminations that have made their way into the medical waste spotlight recently comes a revelation so startling that it has left many in the surrounding areas wondering if they are being utilized in some sort of grand Petri dish-like experiment.

To the dismay of many in the community, it was uncovered in early July in a town-hall meeting that medical doctors from the Utah Physicians for a Healthy Environment (UPHE) and other scientific minds suspect that Stericycle may also be emitting deadly brain-destroying proteins called prions into the environment. This is in addition to their known and simply massive mercury, lead, cadmium, dioxin, furan and hydrogen fluoride emissions, of course.
Prions are the same deforming proteins responsible for causing Mad Cow Disease, Chronic Wasting Disease (CWD) and Creutzfeld-Jakob Disease in humans, and according to the Center for Disease Control (CDC) they carry a horrifying 100% fatality rate for an infected host.

In addition to the potentially nightmarish scenario offered up by prions, it is suspected that radioactive cancer treatment materials could also be making their way into the mostly unchecked plastic medical waste bags imported by Stericycle. If this were found to be the case, it would be in direct violation of their Division of Solid and Hazardous Waste (DSHW) permit.

“We don’t want to breathe gramma’s ashes!” were the alarming words blaring at everyone from an artistically drawn sign at one of the recent Stericycle protests. What is accepted regarding Stericycle is that they burn infectious agents, aborted fetuses, dead animals and even diseased human cadaver parts. So in other words, there is an actual chance that all of those poor marathon runners out there actually could have been breathing in “grammas ashes,” or maybe something even worse. But who really knows, since it turns out that apparently Stericyle does little, if anything, to inspect the nation’s worst-of-the-worst medical junk being shipped down the road to Utah from at least nine states.