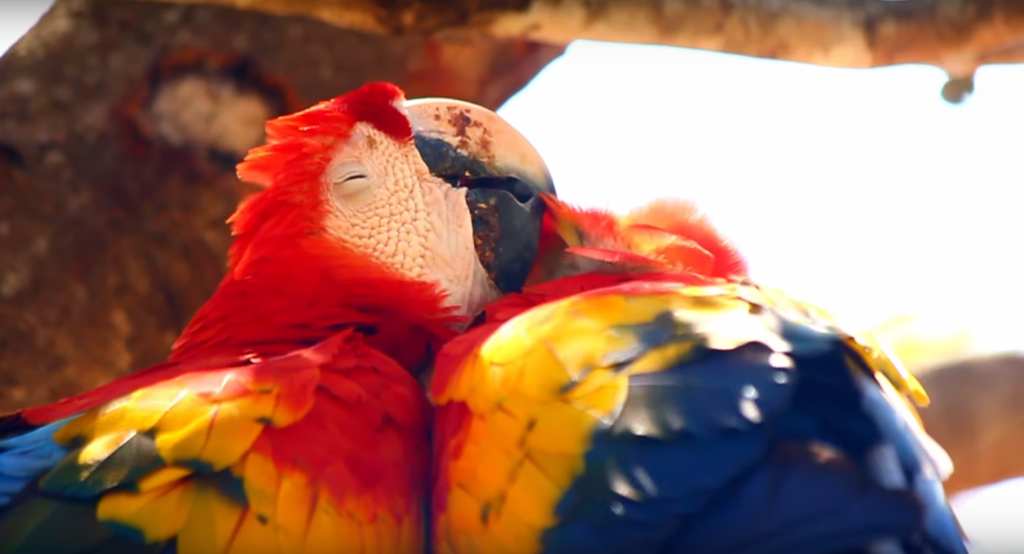 (EnviroNews World News) — When it comes to nature and wildlife videos, we’ve seen a lot of ’em here at EnviroNews, and we’re pretty picky too when it comes to pumping up videos from outside our own archives. We have a mountain of unreleased wildlife films on-hand as it is — piled so high we’d need dozens of editors to get through them all and broadcast them to the world for viewing pleasure. But with the scarlet macaw film featured here, we just couldn’t resist giving credit where credit is due.

The video, titled simply, “Scarlet Macaws — Costa Rica,” stopped members of the EnviroNews World News team in their tracks, mesmerizing them, and even resulting in a few damp eyes. Therefore, we figured we’d show the video to you, the reader, and see if it generates a similar response.

It was shot, compiled and produced by Charlie Fayers, an Advisory Board member of the Costa Rican conservation group Hatched to Fly Free — a non-profit, that amongst other things, raises and releases birds into the Costa Rican wild — in a country where they say the species is “critically endangered,” harboring a population of less than 4,000.

The tender moments captured between mating pairs in Fayers’ video, pull at the viewer’s heartstrings, and left us wondering: if married couples in America and abroad observed the behaviors of this ancient bird, would divorce rates be so high? The video hits a climactic head, when to lovely orchestrated music and gorgeous high-speed (slow-mo) cinematography, a flock of the flamboyant creatures flies right over the head of a smiling young woman who appears to be care-taking a sanctuary for the birds. Check out the video in the player just below and let us know what you think.

MORE ON THE AMAZING SCARLET MACAW

One of 19 species of macaw, the scarlet macaw, or Ara macao as it is scientifically know, has a few things to boast about to be sure. For one, it is the largest parrot on earth — and certainly one of the most colorful. The bird has very long tail-feathers and can reach a length of 39-inches from beak to tail-tip. Scarlets have a nearly featherless white face, and harbor bold red, blue and yellow plumage. Its habitat covers vast stretches of the Amazon Basin from southern mexico all the way down to Peru, Bolivia and eastern Brazil, and they exist on the island of Trinidad as well. There are also two subspecies: Ara macao cyanoptera from Central America, and Ara macao macao from South America.

The bird is mostly vegetarian and possesses a very powerful beak to crack open hard nuts which are a staple in its diet. Interestingly, scarlet macaws also eat several poisonous plants toxic enough to kill other animals. It is speculated by researchers that the bird is able to do this because it also eats a lot of clay from riverbeds — and certain clay is known to sequester and neutralize plant poisons. In some places, this macaw species is revered as a feathered friend, but sadly in many areas, it has been trapped and traded to near extinction. For example, in Honduras, Ara macao is protected as the national bird. Still, this macaw’s habitat is as fragmented as ever — and in many places (like Costa Rica), populations have plummeted after years of relentless pillaging from humans.

The greatest threat to this charismatic winged-one however, is habitat destruction — but it is also under heavy assault from wildlife kidnappers who snatch it from its nests and sell it for around 200 bucks on the black market. Birds smuggled into the U.S. can fetch a price as high as $4,000. Additionally, the species is hunted by locals in many places for both food and feathers — and to top it off, in it’s forested environment, harpy eagles, jaguars, monkeys, snakes and other birds also enjoy eating the scarlet for lunch — compounding with the stresses already imposed by humans — that’s a lot for this colorfully charismatic creature to deal with.

SCARLET MACAWS: TO PET? OR NOT TO PET? THAT IS THE QUESTION

Perhaps humans in general should gain a little more respect for this blazingly red macaw, because it’s no slouch — it just so happens to be one smart cookie and a heck of an escape artist to boot. Like many other parrots, scarlets demonstrate remarkably advanced social behavior, and can also talk, and squawk up a storm. Though not considered amongst the best talkers in the bird kingdom, in captivity, they can pick up a plethora of words and phrases — making them a barrel of entertainment to hang out with too.
SCARLET MACAW SINGS ‘ROW ROW ROW YOUR BOAT’

But make no mistake, owning a macaw as a pet is a huge responsibility, and is discouraged by many animal rights advocates. As a pet, macaws are known as “one-owner birds,” forming strong bonds with their caretakers. Unfortunately, with their long lifespans, they often outlive their owners, and/or the home-situations meant to harbor them — leaving them frequently abandoned and traumatized. Macaws who find themselves feeling dumped, ditched or cast aside often become distressed and display psychological problems like plucking all their own feathers out. This can lead to several longterm consequences for the bird if not properly addressed. In other words, please think twice before attempting to harbor this bird in captivity — because it is a lifelong commitment. In addition, unlike other more docile parrots and macaws, it is said that scarlets can become aggressive as a pet, if not handled properly — and they are even known to bite or scratch if not trained well. Keep in mind, one bite from the exceptionally powerful beak on this bird can send a person to the hospital in a jiffy. First time bird owners are strongly discouraged from keeping this parrot species.

Like many other birds, the scarlet macaw is also a species that mates for life — and a long life it is. In fact, they’ve been known to live up to 60 years in the wild, and up to 75 years under favorable conditions in captivity. They prefer a low-stress existence, hanging out either as a mating pair, or in family flocks, in the canopies of deciduous tress — generating a chorus of elaborate squawking sounds all the while.

Native American tribes from the U.S. revere the bird as well for its flashy unique feathers, and craft the molted tail-feathers into elaborate, artistically designed prayer “fans,” for ceremonial purposes in the Native American Church peyote ways. They maintain these traditions even though the bird does not exist in the wild as far north as the U.S. Please weigh in on the blog under this article, or in social media, and let us know what you thought of the colorful bird video by Charlie Fayers and the Hatched to Fly Free video.

MORE COOL MACAW VIDEOS FROM AROUND THE WEB