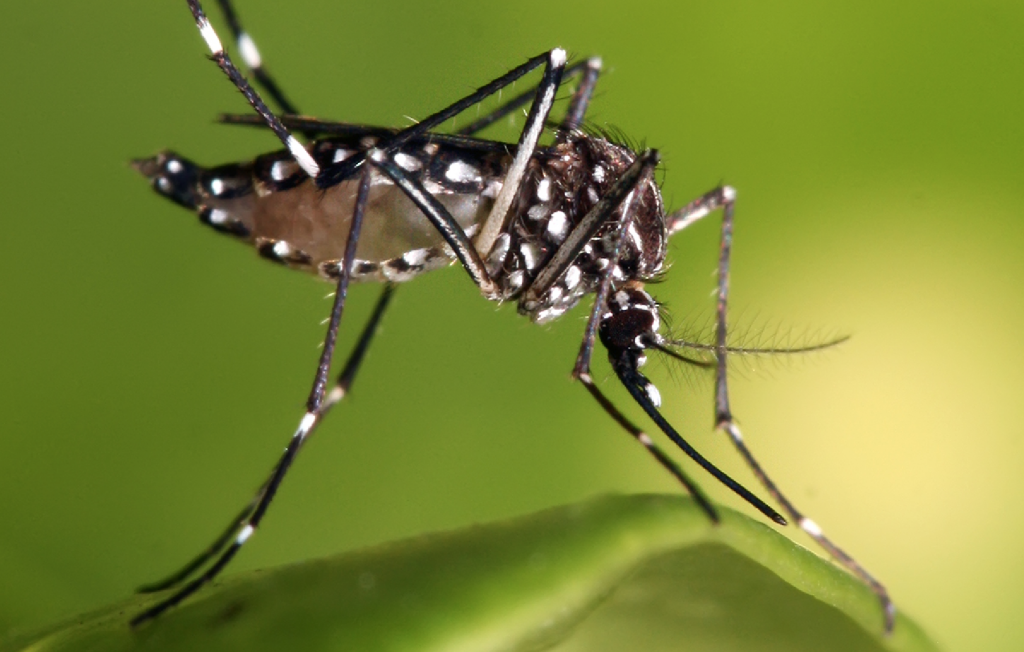 Mosquitos can be one helluva a nuisance — and with those pesky little critters comes myriad illnesses, but two in particular have been present in South Florida in recent years — Chikungunya and Dengue Fever.

Both are vector-borne diseases, and both are transmitted by Aedes aegypti — the scientific name for a bothersome little bug, also known as the “yellow fever mosquito,” that 99.99% of the population despises.

There was an outbreak of dengue in Florida in 2009, but since then it’s been pretty quite. So, does the problem really warrant releasing millions of man-altered, genetically modified mosquitos into the wild, with a cunning war-like plot of wiping the little bugger out (or at least beating the population back to sheer vestiges of what it is now)?

That’s exactly what Oxitec, a British biotech company, and the Florida Keys Mosquito Control District (FKMCD), want to do with the OX513A Aedes aegypti mosquito — let the GMO genie out of the bottle. The OX513A is a man-altered mosquito that carries a “kill switch gene.” Since it is only the female mosquito that bites and transmits the fevers, Oxitech says all of the GMO mosquitos they plan to release are male. The company’s theory is that the designed genetic mutant males then mate with females in the wild, whereafter their offspring carry the “kill switch,” which, in turn, produces an effect “which causes offspring to die,” according to Oxitec’s website. It claims that 95% of the offspring die before reaching maturity.

That 95% percent number in and of itself creates issues for environmental groups because many mosquitos carrying the gene, both male and female, could grow up to maturity and mate — opening up a pandora’s box of unknowns throughout the entire ecosystem.

The company’s theory with OX513A is based on a technique that has been around since the 1950s called “Sterile Insect Technique (SIT).” In the old days, they’d just fry a population of male insects with radiation in their best effort to sterilize them without killing them — then, turn them loose in the wild to compete for female insects during the mating period. With SIT, reproduction doesn’t occur through copulation, hence repeated application of males into the wild can lower insect populations.

The problem with this technique is, many sterilized males become so physically hampered after the radiation, that they are too compromised to compete adequately and mate. Additionally, males that aren’t completely sterile can pass on multigenerational mutations due to the large amounts of radiation they have been exposed to.

Oxitec takes a more scientifically advanced approach to arrive at the same outcome with OX513A, but could that approach contain far reaching and unforeseeable future impacts?

In the epic Sci-fi saga-like series Star Trek Deep Space Nine, a godlike race of shapeshifters called “The Founders” created a genetically modified warrior race called the Jem’Hadar who required a drug called “Ketracel-white” to survive — The Jem’Hadar’s only way of getting it was through the Founders of course, hence they were totally reliant on their makers. In effect, this is what Oxitec has done with OX513A. They’ve designed the pest in such a way with its kill switch gene, that it requires the widespread popular antibiotic tetracycline to survive. So, as long as the OX513A offspring are unable to get to a supply of tetracycline, they perishes before they can reproduce.

In a document titled Genetically Modified Insects, the UK Parliament’s Parliamentary Office of Science and Technology said this:

… environmental NGOs such as Greenpeace suggest that GM insects could have unintended and wide ranging impacts on the environment and human health due to the complexity of ecosystems and the high number of unknown factors, making risk assessment difficult. They have raised several concerns about the release of GM insects:
1. New insects or diseases may fill the ecological niche left by the insects suppressed or replaced, possibly resulting in new public health or agricultural problems.
2. The new genes engineered into the insects may “jump” into other species, a process called horizontal transfer, causing unintended consequences to the ecosystem.
3. Releases would be impossible to monitor and irreversible, as would any damage done to the environment.

Further concern is raised over the second clause above albeit as it relates to humans — and whether the abstract tetracycline gene in OX513A could make its way into the fabric of human DNA — and what health and reproductive consequences that could have. Could female OX513As that survive, or are either released accidentally, pass on their synthetic DNA to humans through their bites? Speaking of accidental female release, it turns out that Oxitec is not very good at releasing males only. According to their own research, about .03 percent of the specimens they release are female — a potential problem, because with millions upon millions of insects set to be released, not only could those females breed, but they could bite other bugs, animals or humans.

Dr. Joseph Mercola, a well-known and controversial media personality and health author, wrote these concerns in his digital publication:

1. The potential exists for these genes, which hop from one place to another, to infect human blood by finding entry through skin lesions or inhaled dust. Such transmission could potentially wreak havoc with the human genome by creating “insertion mutations” and other unpredictable types of DNA damage.

2. According to Alfred Handler, a geneticist at the Agriculture Department in Hawaii, mosquitoes can develop resistance to the lethal gene and might then be released inadvertently.

Todd Shelly, an entomologist for the Agriculture Department in Hawaii, said 3.5 percent of the insects in a laboratory test survived to adulthood, despite presumably carrying the lethal gene.

3. Tetracycline and other antibiotics are now showing up in the environment, in soil and surface water samples. These GM mosquitoes were designed to die in the absence of tetracycline (which is introduced in the lab in order to keep them alive long enough to breed).

They were designed this way assuming they would NOT have access to that drug in the wild. With tetracycline exposure (for example, in a lake) these mutant insects could actually thrive in the wild, potentially creating a nightmarish scenario.

It turns out that Dr. Mercola could be spot on with his idea about these mosquitos having the potential to come across tetracycline in the wild. A recent EnviroNews World News article demonstrates how Minnesota’s lakes and rivers, are now known to be trashed with chemicals and pharmaceutical drugs.

Oxitec has already released these creatures into the wild in several places, the first of which was the Grand Cayman Islands. The release was for the most part conducted in secret, but when locals became aware of it, they were left feeling upset and disenfranchised. Following the Grand Cayman release, Oxitec went forward and “released their frankenskeeters in Malaysia, Brazil, Panama, India, Singapore, Thailand, and Vietnam,” wrote Dr. Mercola.

In fairness, it was reported that the release of millions of the OX513A into specific areas in the aforementioned countries suppressed corresponding populations of yellow fever mosquitos by up to 90 percent.

It should be stated that those tests abroad, although secretive and out of the public eye in most cases, were not carried out by Oxitec alone, rather, in tandem with enthusiastic and compliant participating mosquito control agencies in those countries. For example, The Mosquito Research Control Unit (MRCU) was behind the release in Cayman. The Institute of Medical Research (IMR) in Malaysia — Moscamed and University of Sao Paulo in Brazil and the Gorgas Memorial Institute in Panama, all were behind the tests in their respective countries. In the case of the U.S., the five elected officials comprising the Florida Keys Mosquito Control District decided to propose the experiment, despite widespread opposition in the targeted Key Haven area.

Since millions of these mosquitos have already been released into wild populations using mostly poverty-stricken countries as the guinea pigs, some people want more comprehensive research to be done on the long-lasting ramifications in those areas first — places where the horse has already been let out of the barn, before any more of these “frankenskeeters” are put on the loose.

Oxitec and their enabling counterparts are able to go forward releasing the GM mosquitos into the wild, in part, because there are currently little to no regulations in place prohibiting it.

In the U.S., until legislators get involved and bring EPA and/or FDA regulations up to speed on the issue of releasing GM insects and animals into the open environment, companies like Oxitec will likely be able to continue their experiments in the wilderness areas surrounding local communities — utilizing Americans, the ecosystem, and the whole planet for that matter, as their test subjects.

The Florida Keys proposal is currently under review by the FDA. Although the releases have not begun as of yet, if the FDA gives its blessing, Oxitec is set start introducing the OX513A sometime in 2015, and those events would take place as frequently as three times a week.

Business woman Mila De Mier said in a PBS documentary on the subject, “[At first] I say wow! This is fantastic. This is a really really great idea. To be able to fight mosquitos with another mosquito — what a great concept.” But after De Mier took more time to research the matter, her view on the subject changed. “I don’t want my kids to be laboratory rats. I don’t want my kids to be guinea pigs. Why? Because this is a brand new technology. You get these mosquitos — you release once and for all and let’s experiment and see what happens,” she continued in the PBS film.

Now, Da Mier has started an online Change.org petition that seeks to block the experiment, and as of today, that petition has nearly 157,000 signatures.

In a conducive environment, mosquitos can be a pain in the caboose to say the least. To add to that, they are the most deadly animal on the entire planet — that’s including lions, tigers, bears and even humans. Mosquitos put around 1,000,000 people in their graves every single year, worldwide.

To add yet another interesting perspective to the topic, an entertaining article in Nature.com titled Ecology: A world without mosquitoes, explored the question, what would happen if we just wiped out mosquitos completely off the face of the planet? After interviewing multiple ecologists and bug experts, the consensus was that the ecosystem, and certainly humans wouldn’t miss them much at all — actually, that life on earth might turn out “better.”

Let’s face it, the vast majority of us would love to live in a mosquito-free world — wouldn’t that be great? There are some 3,500 distinct species of the bothersome little bugaboo on the whole of Gaia, and it’s nearly impossible to even make a guess at how many trillions of them are floating around in our environment in all. Still, is it worth actually allowing humans, with various financial and other special interests, to play God in the ecosystem that we all share? Is it really worth the risk of altering the very fabric of life itself in an effort to eradicate pockets of the incredibly annoying, and even dangerous little blood sucker?