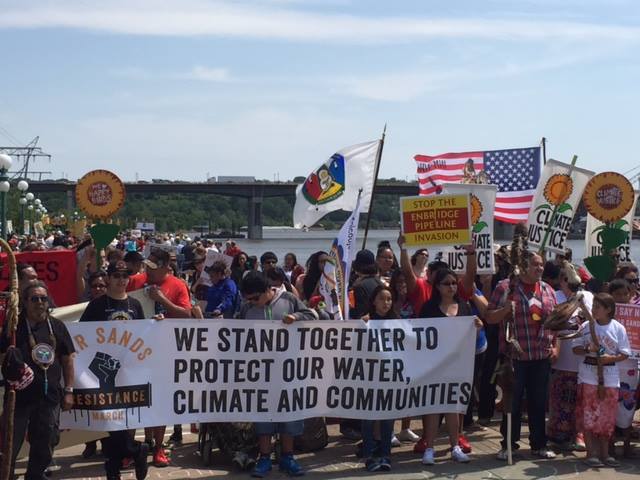 (EnviroNews World News) — St. Paul, Minnesota — On June 6, 2015, over 5,000 took to the streets in protest of tar sands in the Twin Cities. The event titled the “Tar Sands Resistance March” drew a mass of people, equipped with signs and chants, wielding a unified message: “Say no to tar sands!”

It has been reported by several groups that the event constitutes the biggest tar sands march in the history of the Midwestern United States — surely it was one of the largest tar sands-specific events in U.S. history as well.

The Minnesota Twin Cities of Minneapolis and St. Paul are in the line of fire when it comes to the plans of big tar sands. Several massive pipelines, including the Alberta Clipper, have been proposed, and in some cases slated for development in an effort by big oil to bring the nastiest type of crude on the planet from the Alberta tar sands, to the Great Lakes area.

Bitumen crude is what’s extracted from the Alberta disaster — and is’t absolutely loaded with carbon — about two-and-a-half times as much carbon as conventional crude oil in fact. Bitumen is a highly viscous product that typically has to be cut with other substances like diesel in order to send it down pipelines — making it an even deadlier brew.

The substance is also known to be much more corrosive than standard crude, a fact that unfortunate residents of Kalamazoo Michigan know all too well ever since pipeline company Enbridge breeched a tar sands pipeline there that devastated communities in 2010. Affected neighborhoods are still reeling from health problems while Enbridge struggles to get a handle on the mess to this very day.

Environmental groups said indigenous groups took the lead in the march. The Sierra Club floated around pictures on social media of todays event.