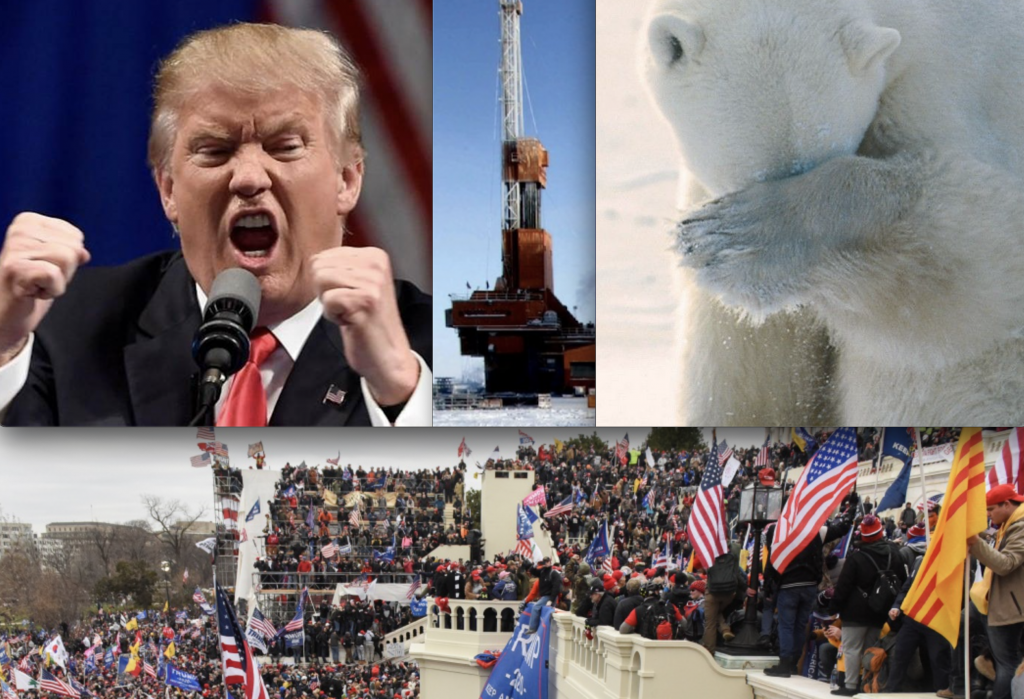 (EnviroNews Alaska) — While Trump supporters were staging an insurrection at the Capitol Building in Washington, D.C., the President’s Bureau of Land Management (BLM) was taking bids for land in the Arctic National Wildlife Refuge (ANWR), now open for oil and gas exploration. On Jan. 6, 2021, the BLM offered the rights to develop 22 plots totaling over 1.1 million acres and received 13 bids on 11 of those areas. Nevertheless, many are calling the event a flop.

According to NPR, only three enterprises placed bids — one of which was the state of Alaska itself. The state-owned Alaska Industrial Development and Export Authority (AIDEA), a development bank, was the only bidder on nine of the 22 sections. Two other small corporations, Regenerate Alaska — a subsidiary of Australia-based 88 Energy, and Knik Arm Services — a small Alaska company managed by an investor named Mark Graber, successfully bid for a single parcel each. The auction brought in over $14 million, with about $12 million coming from AIDEA. The state of Alaska will receive half of the proceeds from the accepted bids.

“By acquiring these tracts, Alaska preserves the right to responsibly develop its natural resources. This will create new, good-paying jobs on the North Slope and generate revenue for the local economies of Alaska’s Arctic and the state’s general fund,” said Alan Weitzner, Executive Director of AIDEA, according to the Alaska Journal of Commerce. The state could sublease the mineral rights on those plots in the future.

While BLM State Director Chad Padgett called the sale a “success,” Kara Moriarty, President and CEO of the Alaska Oil and Gas Association, said the sale was lackluster according to KTUU:

While the results may not have been as robust as we might have expected, industry still supports future access to this area. Today’s sale reflects the brutal economic realities the oil and gas industry continues to face after the unprecedented events of 2020, coupled with ongoing regulatory uncertainty.

Conservationists are using harsher language to describe the lack of bidders and sales, including calling it an “epic” and “colossal” failure. No prominent oil corporations placed bids, and large banks have pledged to not loan money for gas and oil in ANWR.

“They held the lease in ANWR — that is history-making. That will be recorded in the history books and people will talk about it,” Larry Persily, a longtime observer of the oil and gas industry in Alaska, told NPR. “But no one showed up.”

According to the Anchorage Daily News (ADN), the federal government estimated that the leases would bring in $1.8 billion over a decade. This first auction fell far short of those projections.

“Instead of the state of Alaska receiving millions, like it was promised, the state of Alaska actually spent $12 million on today’s lease sale. It’s upside down, it’s backwards and there’s no way President-elect Biden or Congress is going to let this stand,” said Andy Moderow, the State Director for the Alaska Wilderness League, according to KTUU.

The Trump Administration is expected to rush the Department of Justice’s anti-trust review — a process that usually takes two months — so the Interior Department (DOI) can then issue the leases formally before Trump leaves office.

As reported by EnviroNews, Senator Lisa Murkowski (R-AK) added a provision to the 2017 Tax Cuts and Jobs Act, which required the DOI to hold two leasing sales by 2025 on the 1.5 million acres encompassing the refuge’s coastal plain. Until Trump’s tax bill, Democrats had been able to protect ANWR from Republican attacks. The leasing plan was announced on Sept. 12, 2019.

“Arctic Refuge drilling passed, not because of popular sentiment or because of any urgent need for its speculative oil, but because it was jammed into a larger tax bill, skirting a full, fair and open debate,” Adam Kolton, Executive Director of the Alaska Wilderness League, said in a press release.

Pro-industry Governor Mike Dunleavy tweeted the lease auction was “historic for Alaska and tremendous for America.” He said that it would “put Alaskans to work” and bring in more money for the state and its communities while decreasing America’s reliance on foreign oil. Dunleavy also praised the Administration’s rollback of the “roadless rule” in the Tongass National Forest.

In 2018, 34.8 percent of the workers employed in the Alaskan oil industry were nonresidents. That was an increase from 33.6 percent in 2017; the percentage has been on the rise since 2009 when it was at 28.1 percent according to Alaska’s Department of Labor and Workforce Development.

On August 17, 2020, the DOI released the parameters it would use to auction off the leases available in ANWR’s “1002 area” near the Beaufort Sea, fulfilling its obligation to Congress under Murkowski’s 2017 provision. U.S. Secretary of the Interior David Bernhardt called the law “unique” because it didn’t just allow for oil and gas development but required it.

“A Biden administration is likely to limit availability of new oil and gas leases on public lands in comparison to the traditional leasing process,” according to Kirkland & Ellis, an international law firm. “Most likely, this limit would not affect existing federal leases.”

(EnviroNews DC News Bureau) – Washington D.C. – On Aug. 17, 2020, the U.S. Department of the Interior (DOI) fulfilled its obligation to Congress and released the parameters it would use to open the Arctic National Wildlife Refuge (ANWR) to commercial oil and gas development for the first time….