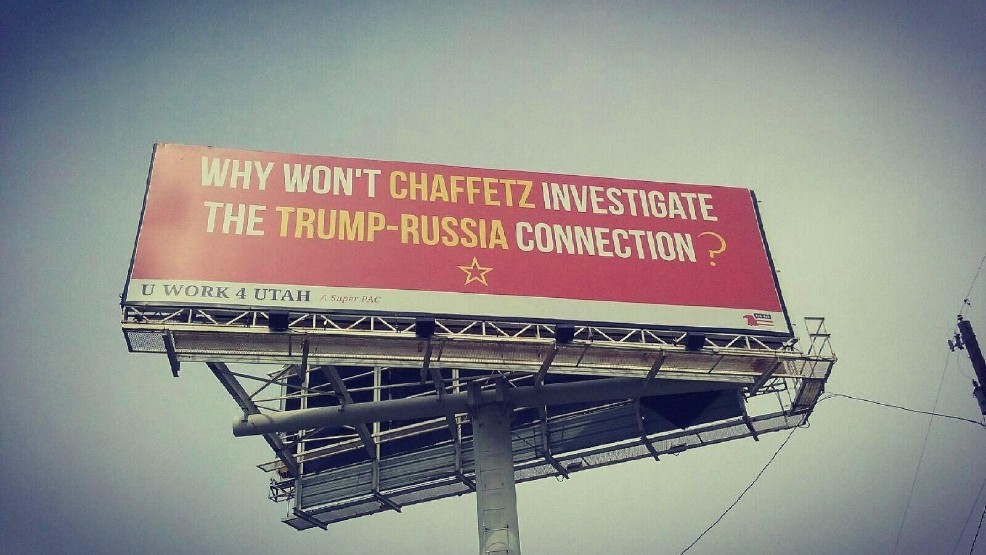 “The more traditional methods of getting our elected officials’ attention do not seem to be working,” Jeremy Voros told the The Salt Lake Tribune after the sign was completed.

The sign, which bears a star and gold sickle from the former Soviet Union’s flag, stands on northbound Interstate 15 in Provo, Utah. The PAC aims to pressure Chaffetz, the Chairman of the House Oversight Committee, to further investigate the increasingly complex connections between Russia and the Trump Administration — particularly in regard to the 2016 presidential election. On the same day this sign went up, the Washington Post reported the FBI monitored President Trump’s former campaign adviser Carter Page in 2016, regarding suspicions he was carrying out clandestine intelligence activities on behalf of Russia.

“It’s just north of the exit that you would use to access Chaffetz’s Utah headquarters. We’re hoping that if, by any chance, he makes it back to Utah that he would at some point drive by it,” Chris Voros said.

The brothers started the PAC after having trouble reaching their representative by phone and after a recent unruly town hall. At that February 2017 town hall, the crowd chanted “do your job,” whereafter the congressman said he felt “bullied” by what he called “paid protestors.”

“He dismissed our questions at his town hall. And, then he accused real Utahns of being out-of-state, paid protestors. Let’s invest some of that ‘protest payment’ to keep asking questions and let him know he can’t ignore real Utahns,” reads the U Work 4 Utah site. The PAC has raised almost $12,000 and has plans to erect more signs.

Chaffetz told the Salt Lake Tribune the Oversight Committee has and continues to back the investigation, though now “more in a supporting role.”

“They can keep wasting their money. It’s up to them,” he said of the group’s plan to build more signs.

The next billboards are scheduled to go up along I-15 this week with a price tag of around $4,700.