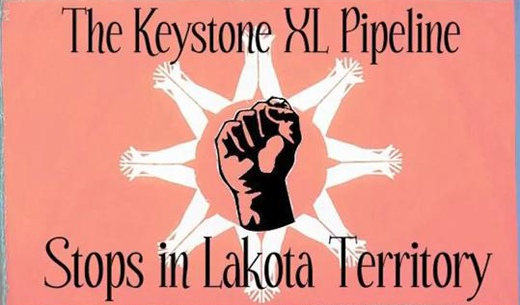 (EnviroNews DC News Bureau) — Lower Brule, Lower Brule Indian Reservation, South Dakota — The Oceti Sakowin, or Great Sioux Nation as it known in English, pressed on in its fight against the Keystone Pipeline this week. In a press release dated April 29, 2015, the Lower Brule Lakota Sioux Tribe of South Dakota invoked a clause from the Fort Laramie Treaty of 1868 wherein the U.S. Government agreed to “proceed at once to cause the offender to be arrested and punished according to the laws of the United States.” The accused “offender” in this case: foreign tar sands pipeline company TransCanada.

The press release calls for the enforcement of this treaty clause against TransCanada, and also states that “roughly 40% of South Dakota is off limits to TransCanada.” General Sherman was the chief negotiator of the treaty way back in 1868, and although the “bad men” clause has been utilized in only a handful of cases over the past century-and-a-half, success for the plaintiffs has been rare, and according to a historical analysis in the Harvard Law Review, solitary. The report, aptly titled A Bad Man Is Hard To Find, claims that only in one instance, albeit recently, has the clause been deployed successfully. The plaintiff was a woman named Lavetta Elk, and although she is the only known victor in a “bad men” case, the report also suggests that the instance could set precedent and pave the way for more victorious applications of the clause in the future. The report states:

Nine treaties concluded between the United States and various Indian tribes in 1867 and 1868 each contain what is known as a “bad men” provision. Within each of these provisions is a clause in which the United States promises to reimburse Indians for injuries sustained as a result of wrongs committed by “bad men among the whites, or among other people subject to the authority of the United States.”

Although these “bad men among the whites” clauses have rarely been used in the last century and a half, they remain the source of a viable cause of action for Indians belonging to those tribes that signed the nine treaties of 1867 and 1868. In 2009, Lavetta Elk won her action for damages under the Fort Laramie Treaty of 1868, recovering a judgment in the Court of Federal Claims of almost $600,000 from the United States government.

Elk is the first and only plaintiff to take a “bad men among the whites” action through trial and win on the merits.

The Sioux have been at the forefront in the fight against the Canadian tar sands projects, as well as the fourth and final leg of the Keystone XL Pipeline project. Native American resistance against oil sands could be witnessed in full force at an event covered by EnviroNews last year in Washington D.C. — the Cowboy and Indian Alliance.
Historic Keystone XL Protest Spurs Hope for Environmental Movement While Activists Battle On

Acting Chairman Kevin Wright said the move was made by the Lakota in response to the “death, devastation, and destruction” wreaked on the Canadian First Nations people by the massive Alberta tar sands project.

The press release also called for the U.S. Government to perform the “immediate removal of TransCanada from the aboriginal and territorial treaty boundaries of the Oceti Sakowin, also known as The Great Sioux Nation.”

The Bureau of Indian Affairs (BIA) was not available to answer questions about exactly how TransCanada could or would be removed if the treaty clause was enforced.

The entire contents of the Lower Brule Lakota press release can be seen just below:

Lower Brule, SD – The Lower Brule Sioux Tribe announced today that it is celebrating the 147th anniversary of the signing of the 1868 Fort Laramie Treaty by rejecting Keystone XL. The Tribe is calling for the immediate removal of TransCanada from the aboriginal and territorial treaty boundaries of the Oceti Sakowin, also known as The Great Sioux Nation. The tribe is making this demand in direct response to the unethical business practices that TransCanada has demonstrated over the last six years. The tribe made it clear that they are invoking their rights under article one of the 1868 Fort Laramie Treaty, which states:

From this day forward all war between the parties to this agreement shall forever cease. The government of the United States desires peace, and its honor is hereby pledged to keep it. The Indians desire peace, and they now pledge their honor to maintain it. If bad men among the whites, or among other people subject to the authority of the United States, shall commit any wrong upon the person or property of the Indians, the United States will, upon proof made to the agent, and forwarded to the Commissioner of Indian Affairs at Washington city, proceed at once to cause the offender to be arrested and punished according to the laws of the United States, and also reimburse the injured person for the loss sustained.

Invoking the “Bad Man” clause of the treaty means roughly 40% of South Dakota is off limits to TransCanada. This would directly affect the proposed Keystone XL pipeline route and the access to transmission lines.

As descendants of the people of this land we have witnessed destruction of many magnitudes. We are concerned for our land, water, and most importantly not only the physical wellbeing of our people but spiritual wellbeing as well. I am first a human being, not a politician, when it comes to these matters. I believe in protecting our people and look to more ecological ways of living.

It is not an option to bargain with our grandchildren’s future so we can live comfortably today. After much research into this Keystone XL pipeline and hearing firsthand accounts and many disheartening stories from Canadian First Nations, we feel a need to stand in support of our northern relatives. Our First Nations relatives have been fighting to end these atrocities. This pipeline and tar sands extraction has brought death, devastation, and destruction to their homelands. The children and women of the First Nations have felt the true effects from this pipeline. It is because of what we have seen happen to the north that we know that TransCanada will bring the same atrocities here to our homelands. Corporations like TransCanada are attempting to cross treaty lands and we are not going support this. We see them as ‘Bad Men’ as defined by our treaties with the United States government. We feel that TransCanada (these bad men) needs to be removed from our aboriginal and treaty territory.

In February 2015, Department of the Interior Secretary Jewell stated that she would make sure tribes were provided a platform to address issues relating to Keystone XL. Since that time the Department of Interior has denied meeting with South Dakota Tribal Nations regarding this issue.

President Wright added, “We all have rights as indigenous peoples and demand that we be heard. This land is all we have and we are obligated to preserving it for our future generations. We are encouraged by Presidents Obama’s strong stance on climate change and his recent statements supporting our indigenous youth. President Obama, it would be a great honor to have you stand alongside the Oceti Sakowin on May 8th and once and for all reject Keystone XL.”