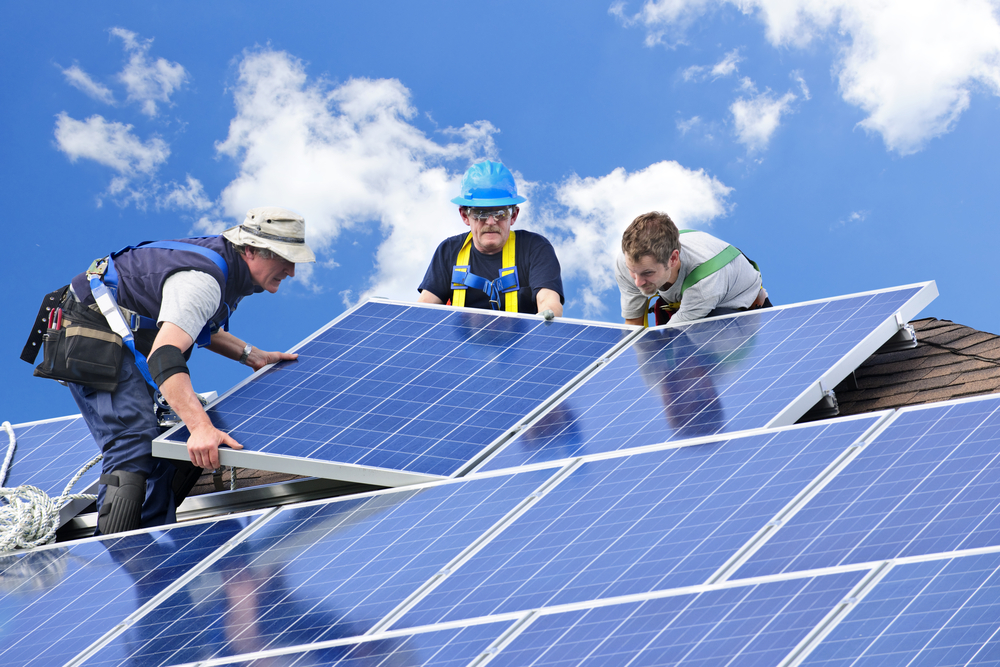 (EnviroNews D.C. News Bureau) — Washington D.C. — A hearing at the U.S. International Trade Commission (ITC) set for August 15, 2017, may decide the fate of the nation’s solar industry. Prompted by two major solar cell and panel manufacturers, SolarWorld and Suniva, the ITC is investigating whether these companies have been harmed by a flood of imports. If the ITC finds in their favor, it could impose tariffs that would threaten 88,000 U.S. solar jobs, according to the Solar Energy Industries Association (SEIA).

Both Suniva and SolarWorld are in bankruptcy. And while both companies manufacture in the U.S., Suniva is majority-owned by Shunfeng International, based in China, while SolarWorld’s parent company, itself bankrupt, is headquartered in Bonn, Germany.

In a summary of the SEIA’s prepared remarks for the upcoming ITC hearing, emailed to EnviroNews, the trade group points out that Suniva and SolarWorld “were unable to manufacture and supply the 72-cell modules required to meet demand. Their production capacities were insufficient to handle scale requirements for those projects. Therefore, to meet utility-scale demand, increasing CSPV (crystalline silicon photovoltaic) imports were pulled into the U.S. utility market – they did not ‘flood’ the market – to supply developers with necessary products.”

The U.S., where the solar panel was invented, now manufactures only two percent of the world’s panels. China produces 65 percent, according to the Renewables 2017 Global Status Report. But despite its dismal global market share, U.S. solar manufacturing is not moribund. “There is a pretty vigorous solar manufacturing base here in the United States, with about 38,000 people and over 600 companies manufacturing here,” Hopper said.

The solar industry set a record in 2016, with installations accounting for 39 percent of all new electric generating capacity in the U.S. The sector as a whole employs 260,000 Americans through 9,000 businesses. The average cost of solar panels has dropped 63 percent in five years. “Over the next five years, we think solar will triple,” said Hopper, adding, “That presupposes there is no untoward trade action imposed on our industry.”

SolarWorld and Suniva have asked the ITC to set a minimum price of 78 cents per watt on solar panels manufactured outside the U.S. That would bring costs back to much-higher 2012 levels, wiping out much of the competitive advantage solar energy now enjoys. A report from analyst firm IHS Markit predicts that if the requested tariffs are granted, solar demand will plunge by 60 percent over the next three years.

In a surprise twist to this story, conservative groups, including the Heritage Foundation and the American Legislative Exchange Council (ALEC), along with non-solar industry associations and manufacturers, formed the Energy Trade Action Coalition to oppose the tariffs. “Protectionism is never the solution for an inability to compete globally,” said Bill Gaskin, former President of the Precision Metalforming Association. “Our country’s trade laws should never be co-opted into causing widespread pain for the broader U.S. economy.”

U.S. lawmakers are lining up on both sides of the trade dispute. Representatives Dan Kildee (D-MI) and Rob Woodall (R-GA), both representing states with Suniva facilities, indicated their support of the tariffs, according to The Hill. However, an August 11, 2017 letter signed by 16 senators, including Republicans and Democrats, expressed “deep concern” and urged the ITC to “carefully consider the potential negative impact” on solar jobs and companies.

The ITC is set to make its decision on September 22, 2017, but that’s not the only threat to the burgeoning U.S. solar industry. On April 14, 2017, U.S. Energy Secretary Rick Perry directed the Department to conduct a study of the electric grid and electricity markets. Language in the directive alarmed renewable energy producers. Perry’s memorandum pointed to “regulatory burdens introduced by previous administrations that were designed to decrease coal-fired power generation,” claiming that, “Such policies have destroyed jobs and economic growth, and they threaten to undercut the performance of the grid well into the future.”

Hopper brought up Perry’s memorandum during her interview with EnviroNews as well, saying, “A lot of the industry is pretty anxious about the grid study that Secretary Perry has ordered out of the Department of Energy. Given the way in which it was framed, there was concern that renewables were being seen as a threat to the security of the grid, and we think that’s not an accurate representation of what’s happening.”

The study was due June 19 but has yet to be released. A leaked draft of the study obtained by Bloomberg New Energy Finance showed that it found solar and wind power pose almost no threat to the reliability of the U.S. power grid. Conversely, the draft states, “The power system is more reliable today due to better planning, market discipline, and better operating rules and standards.” As for now, it remains unclear when the final study will be published and what it will say upon review by political appointees.

Meanwhile, some utility industry efforts to derail residential solar have also cost jobs. When the Public Utilities Commission of Nevada eliminated net metering in 2015, which allowed consumers to sell excess energy from their rooftop solar installations back to the utility, the state lost more than 2,600 jobs. Subsequently, industry giants SolarCity, Sunrun and Vivint Solar all closed their operations in Nevada. A New York Times report published July 8, 2017, found “a concerted and well-funded lobbying campaign by traditional utilities, which have been working in state capitals across the country to reverse incentives for homeowners to install solar panels.”

Meanwhile, rooftop solar customers in Utah are up in arms as Rocky Mountain Power wants the state’s Public Service Commission (PSC) to reduce the amount it pays homeowners for the electricity they send back to the grid. The Salt Lake Tribune wrote the proposal “could be devastating to the growth in the industry.” In testimony before the PSC, Vivint Solar said it could lose 425 jobs in the state.

In Florida, the utility industry spent more than $21 million to push an amendment to the state constitution that could have severely crimped future industry growth. The Miami Herald called it an attempt “to deceive voters into supporting restrictions on the expansion of solar by shrouding Amendment 1 as a pro-solar amendment.” The strategy backfired when a representative from the James Madison Institute, which SourceWatch labels a “right-wing advocacy group,” was caught referring to the initiative as “a little bit of political jiu-jitsu.” In the end, Florida voters rejected the amendment.

Earlier this year, the Nevada state legislature overrode the utilities commission – and even went one step further. On June 15, Governor Brian Sandoval signed Assembly Bill 405, which restored net metering — but the law goes beyond that. Nevada became the first state to guarantee, under law, the right to self-generate electricity. “This law will give homeowners and businesses who may have wanted to go solar the assurances they sought, and we expect strong solar growth and jobs to follow,” said Sean Gallagher, SEIA’s Vice President of State Affairs. Tesla, Sunrun and Vivint Solar have now all said they plan to resume sales and installations in the state.

Hopper pointed to the turnaround in Nevada, as well as positive outcomes in Colorado and a number of individual electric utility rate cases elsewhere. Now large, investor-owned electric utilities are putting their resources in commercial-scale renewable projects. “Most of the growth is coming from utility scale solar,” Hopper told EnviroNews. “They’re doing it because it makes economic sense; it’s a good business to be in, and we welcome any and all players to the table.”

Free-market economics are the driving force behind the growth of solar and wind, as environmental activist Robert F. Kennedy, Jr. pointed out in a recent video interview with EnviroNews. Yet the industry could be derailed by political action in Washington, dictated by President Trump, who has vowed to “end the war on coal.”

To Kennedy, that’s a losing strategy. “Anything that Trump does is not going to bring back a single coal job, not one,” he said. “If you believe in markets, you have to believe that the era of coal has ended.”

(EnviroNews DC News Bureau) – Washington D.C. – The U.S. Department of Energy (DOE) issued its second annual U.S. Energy and Employment Report (USEER) in January of 2017, and the numbers didn’t bode well for the fossil fuels industry. On the other hand, the statistics for the solar…

Robert F. Kennedy Jr.: ‘If you believe in markets, you have to believe the era of coal has ended’

(EnviroNews DC News Bureau) – Park City, Utah – “Anything that Trump does is not going to bring back a single coal job, not one,” said environmental activist Robert F. Kennedy, Jr. “If you believe in markets, you have to believe that the era of coal has ended.”…

(EnviroNews DC News Bureau) – Park City, Utah – In the view of environmental advocate and Waterkeeper Alliance President Robert F. Kennedy, Jr., the oil industry is trying to hold back the future. “The only way they can maintain market dominance is by controlling our political system, because…

(EnviroNews Wyoming) – Cheyenne, Wyoming – In the second week of 2017, nine Republicans submitted Senate Bill 71 to the Republican-dominated Wyoming legislature – a bill that would outlaw and penalize the large-scale production of wind and solar energy in the Cowboy State. If the bill becomes law,…

(EnviroNews World News) – Chornobyl, Ukraine – Three decades after the disastrous nuclear accident at the Chernobyl power plant, the site is once again set to produce electricity, but not from atomic reactors – this time from solar panels. Business Insider (BI) reported that a small 1.5-megawatt (MW)…

(EnviroNews World News) – India, a target of President Donald Trump’s wrath when he announced he was withdrawing the U.S. from the Paris Climate Agreement (Paris Accord), is moving away from coal. That was evident on June 10, 2017, when the country’s government-owned Coal India Limited announced it…

(EnviroNews World News) – Azraq, Jordan – The newly activated two-megawatt solar photovoltaic power plant at the Azraq refugee camp in Jordan is the first refugee camp in the world to be powered by a renewable energy facility. The plant started running May 17, 2017, and will provide…