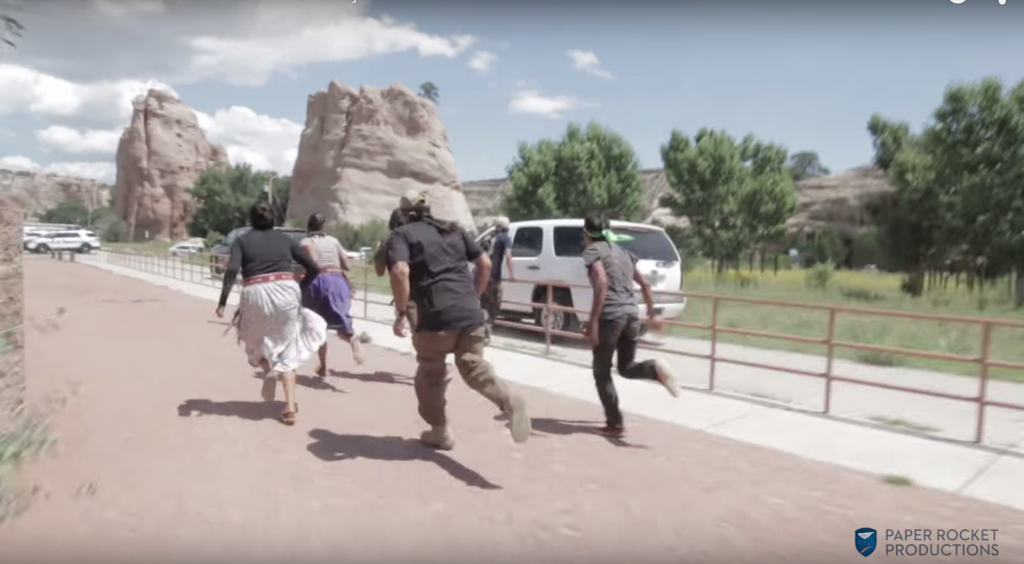 (EnviroNews Arizona) — Windowrock, Arizona — Sen. John McCain (R-AZ) and Arizona Gov. Doug Ducey addressed an audience, Friday, August 14, 2015, at the Navajo Nation Code Talkers Museum as part of a celebration. Amidst the attendees were dozens of protesters holding signs and chanting concerns over potential copper mining slated for sacred and holy grounds, as well as the future of water rights.

During World War II, 430 Navajo men were assigned to develop an unbreakable code — they were known as the Code Talkers, but few of the men are still living today. It was a ceremony to honor these men that brought McCain, a man widely hailed as a “war hero,” onto Native land to begin with. What he encountered there may have been more than the 78-year-old lawmaker had bargained for.

The event was not disrupted by the protesters, most of who were a part on an inter-tribal alliance set on protecting Native land and rights. However, the activists were able to get their message across loud and clear.

Video clips, shot by independent filmmakers Deidra Peaches and Jake Hoyungowa, as part of their Paper Rocket Productions, popped up on social media over the weekend. The clips show protesters chanting, shouting, waving signs and ultimately and climactically chasing McCain’s vehicle convoy. Activists chanted, “Get the hell off our land,” as the vehicles sped away.

A last-minute land-swap rider, attached to the annual must-pass National Defense Authorization Act (NDAA) for 2015 was approved in late 2014. This enabled the transfer of a 2,422-acre plot of U.S. Forest Service (USFS) land to Resolution Copper Mining — a subsidiary of Rio Tinto — in exchange for a number of parcels in Arizona, set to be managed by the USFS and the Bureau of Land Management (BLM). The proposed method of extracting copper for this site is called “block cave mining.” It would create a crater 1,000-feet deep and two-miles-wide at Oak Flat, and could generate a cubic mile of waste. Not only would the mine destroy the land, but also would take a toll on the San Carlos Apache who have revered the pristine place “since well before recorded history,” according to congressional testimony from the Society for American Archeology.

Adriano Tsinigine, who opposes the desecration of Oak Flat, attended the Code Talker Day event. He reported later on social media that he asked McCain to pose for a photograph. “I pulled out my ‘Protect Oak Flat’ card and when he seen it, he looked me right in the eye and said ‘Get out of here, now!’ Haha, this ma’ii is just afraid of us, because of how powerful we are,” Tsinigine posted. (EDITOR’S NOTE: To the best of our understanding “ma’ii” means God of trickery in the Navajo language.) Corroborating Tsinigine’s account, Hoyungowa had captured footage of McCain trying to give him the boot — showing just how hostile the Senator is toward those in opposition of his backdoor mine deal.

Noteworthy in this ongoing battle is the fact that Representative Raul Grijalva (D-AZ) has proposed a bill to abolish the McCain-Flake NDAA provision — legislation that would repeal Section 3003 of the FY15 NDAA, and put a stop to the two largest mining conglomerates on earth — Rio Tinto and BHP Biliton (also part of the deal) — from flattening Oak Flat forever, to fatten their pockets.

Oak Flat was only one of many issues the Native American activists had with McCain. “There was a secret meeting to talk about water [contamination] in a closed-door meeting. There was no public comment, no transparency between the tribal government and the people,” Hoyungowa said in a phone interview with EnviroNews. “[The government] is not being transparent the way they should be with us,” he added.

According to sources, the cloaked meeting was in regards to a Colorado mine-water spill that occurred when the Environmental Protection Agency (EPA) was conducting an inspection. EPA officials were investigating an antiquated mine near Silverton earlier this month, when all hell broke loose after they spilled approximately 3 million gallons of toxic wastewater into the Animas River.

President Begaye at the entrance of Gold King Mine, the origin of this tragedy explains the occurrence of events. Heavy metal tailings turned the river bright orange for miles, as the contamination eventually worked its way into New Mexico via the San Juan River – a tributary of the mighty Colorado River.

The EPA reportedly handed out papers asking for Navajo Leaders to sign away their rights to sue the federal government for damages.

“Navajo [Nation] didn’t get voting rights in time to establish water rights, and now they want us to sign away our rights to sue,” Hoyungowa said.

McCain has a quite a history of angering Native Americans in his home state of Arizona. Considering the multiple deals the senator has shafted Natives on in the past, and some of the highly controversial comments he’s made about them, it should come as a surprise to no one that his motorcade was ambushed by a posse of outraged, Native American “homeland security” activists, as soon as he stepped foot on their sovereign territorial lands.

Posted by Natives Against John McCain on Thursday, April 26, 2012

Posted by Natives Against John McCain on Thursday, April 26, 2012