(EnviroNews Arizona) — Tucson, Arizona — Two of America’s most successful environmental gunslingers fired off yet another lawsuit against Trump’s U.S. Fish and Wildlife Service (USFWS/the Service) on September 4, 2019, accusing the agency of “[failing] to consider science” as part of a “capricious” decision to not protect the increasingly rare and fragile Sonoran desert tortoise (Gopherus morafkai) — a species the two NGOs say is teetering on the “brink of extinction.”

WildEarth Guardians (Guardians/WEG) and Western Watersheds Project (WWP) filed the suit in federal court in Tucson, and are represented jointly by attorneys from the Western Environmental Law Center (WELC). According to a press release published in unison by the three non-profits, the complaint petitions the court to “set aside the [Service’s] decision and ensure compliance with the Endangered Species Act (ESA).”

Guardians, alongside the Center for Biological Diversity, is responsible for hundreds of species being listed under the ESA following a string of monumental lawsuits. Guardians boasts  a 90%+ success rate in lawsuits against the federal government.  WWP holds a similar record, with Erik Molvar, Executive Director of WWP, telling EnviroNews he figures his organization is successful in approximately 85% of its legal actions.  The groups have been fighting hand-in-hand for over a decade to protect this slow moving creature, and have no intention of stopping now.

WWP told EnviroNews Arizona that the tortoise’s numbers have “plummeted about 50 percent” since the 1980s. They decided to spring into action now over increasing concerns that the non-binding voluntary conservation agreements that are in place to help the species recover, simply aren’t working.

Plight of the Sonoran Desert Tortoise: In Trouble Since the Day it Was Called a New Species

Gopherus morafkai was first placed on the “candidate list” for consideration to the ESA back in 2010 after a joint petition was filed by WEG and WWP with the Service two years earlier in 2008. Despite USFWS saying it was warranted for listing as a distinct population segment (DPS), the agency declined to do so at that time, reasoning that there were species of “higher priority” trumping the tortoise. This left the animals to fend for themselves in the desert with no legal protections at all.

In 2011, and again in 2012, the USFWS reaffirmed its own conclusion that Gopherus morafkai was indeed a separate species, distinct from it’s close relative the Mojave desert tortoise (Gopherus agassizii), a.k.a. Agassiz’s desert tortoise, making an even stronger case to list the Sonoran population. 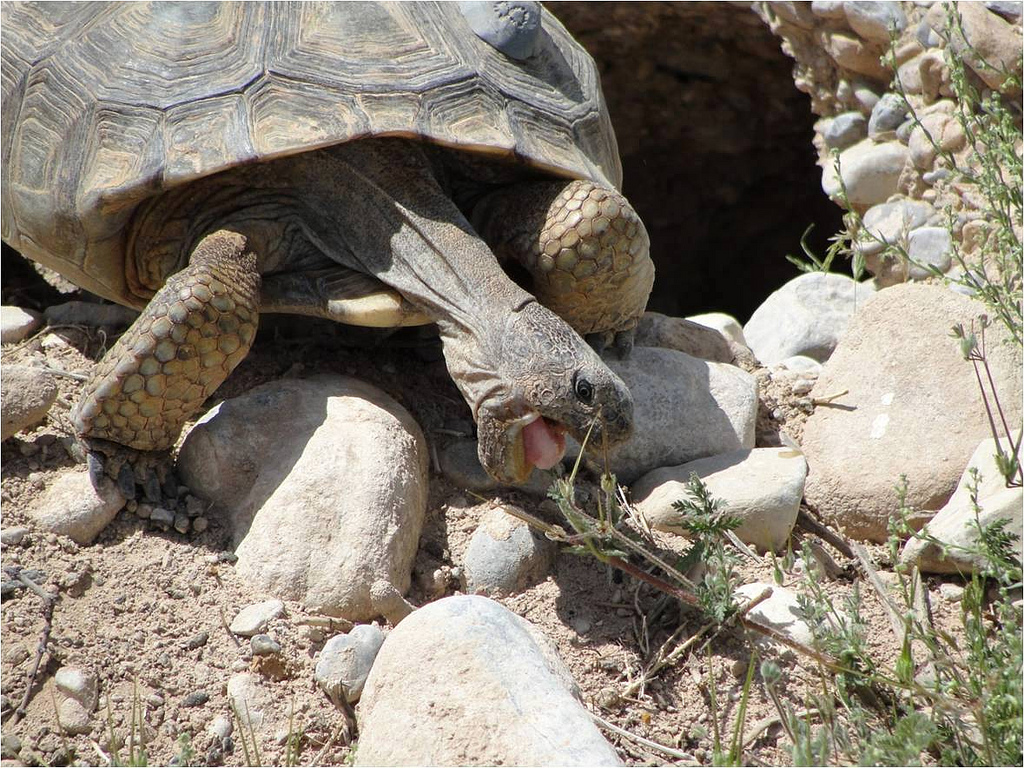 In 2013 and 2014 the agency doubled down on its own findings again, even going as far as drafting the proposed listing rule and entering into voluntary conservation agreements — all in an apparent preparation for a listing to the ESA.

But in 2015 toward the end of the Obama Administration, the USFWS stunned tortoise aficionados with a full-stop 180-degree reversal, when it announced it would not be protecting the Sonoran desert tortoise after all.

USFWS deemed the tortoise “not warranted” for listing under the Endangered Species Act (ESA) in its release stating, “After reviewing the best available scientific and commercial information, the U.S. Fish and Wildlife Service finds that the Sonoran desert tortoise does not face the threat of extinction and will be removed from the Endangered Species Act candidate list.”

But many conservationists felt burned by the Service’s flip-flop, and still don’t have anything friendly to say about that announcement.  In a written statement about yesterday’s legal filing, Cyndi Tuell, Arizona and New Mexico Director with WWP, addressed the 2015 reversal this way:

For five years the Fish and Wildlife Service recognized the grave danger of extinction facing the Sonoran desert tortoise. The agency’s radical about-face in 2015 — deciding that suddenly this species is going to be just fine despite increased threats to the tortoises and their habitat — is the definition of arbitrary and capricious. The Service’s denial of protections will doom the tortoise, and therefore we must hold the agency accountable.

Tuell pulls no punches about what needs to be done to preserve this species.  “Livestock grazing takes place on nearly 7 million acres of federal public lands identified as habitat or potential habitat for the Sonoran desert tortoise,” she told EnviroNews in an interview. “These cows compete with the tortoise for the same food and sadly, the tortoises are losing the fight. Getting the livestock off the lands the tortoise needs to survive would go a long way towards protecting this species,” Tuell concluded.

Matthew Bishop of WELC is the key attorney representing both Guardians and WWP in the lawsuit and says negligence is no excuse for the Service. “The law doesn’t allow the [USFWS] to assume the species is doing fine based on an absence of data,” he said.  “The agency must be forward in its thinking and apply the best available science.”

Guardians and WWP also took it a step beyond the Sonoran desert tortoise in their statement yesterday, referring to an ongoing, planet-wide, mass extinction happening in real-time, and stressing the importance of the ESA:

The groups are seeking full and rigorous implementation of the ESA, one of the most successful conservation laws in the world. The law is especially important as a defense against the current extinction crisis. Species are disappearing at a rate much higher than the natural rate of extinction due to human activities, resulting in what some scientists term a “biological annihilation.” According to a recent United Nations report, over a million species are currently at risk of extinction.

WWP and Guardians continue to fight the federal government’s “failure” to protect critters and creatures in peril, one species at a time, and say they have no intention of taking the pressure off when it comes to the Sonoran desert tortoise.

EnviroNews Arizona asked repeatedly for comment from the USFWS for this article but did not receive a response.