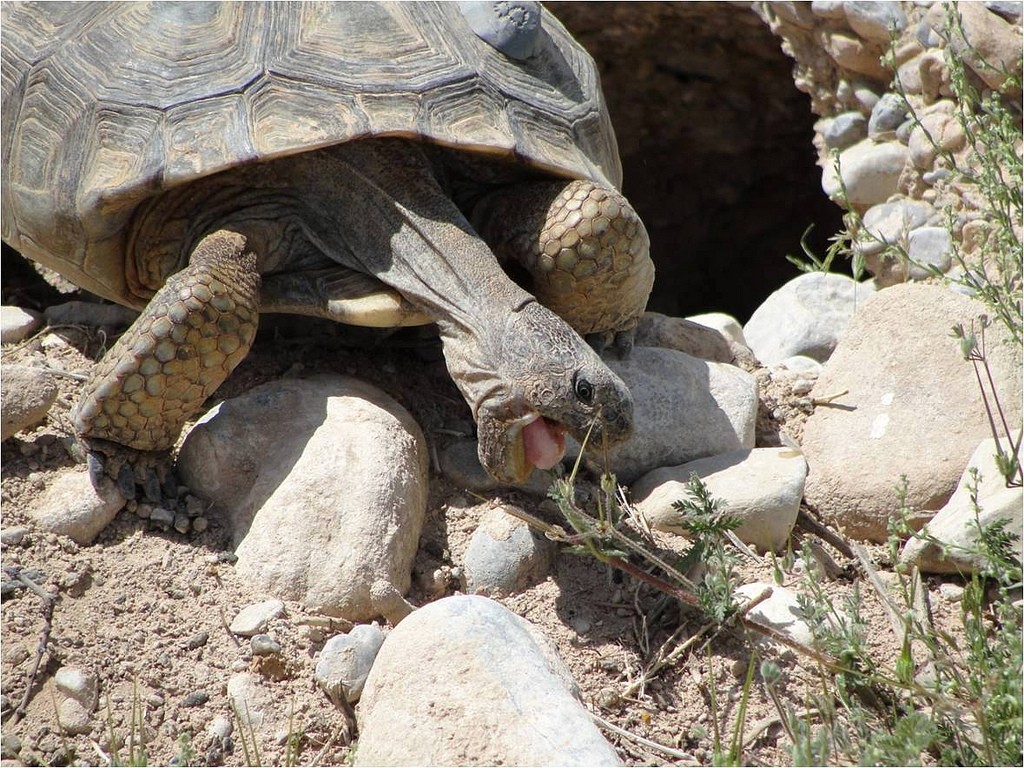 (EnviroNews Arizona) — Washington D.C. — The Morafka’s, or Sonoran desert tortoise, or Gopherus morafkai as it is scientifically known, is a slow moving, yet ancient creature that gets its water from eating native plants while spending most of its time in underground insulated burrows that it digs for shelter. The species resides exclusively in parts of Arizona and Mexico in the Sonoran Desert.

Gopherus morafkai is extremely resilient when it comes to resisting harsh elements and brutal weather conditions, giving it a 50-80-year lifespan — but unfortunately not so resilient concerning human encroachment into its habitat.

It’s probably hard enough for the little fella to survive in an environment that can reach 130 degrees Fahrenheit on one hand, and plummet to sub-zero temperatures on the other, with hardly any water in sight, but that’s what it does — and that’s without including the constant infringement of new roads, real estate development, livestock grazing, off-road vehicles, and the occasional black-market criminal wanting to snatch them up for illegal pet trading. Nevertheless, on October 5, 2015, the U.S. government made its position on this matter official: the creature will be getting no help from the federal government, despite its plight.

The announcement came as part of a court-ordered deadline to make a decision by the end of September 2015, after the environmental groups WildEarth Guardians and Western Watersheds Project petitioned the U.S. Fish and Wildlife Service to list the imperiled desert-dwelling tortoise in 2008. Though the decision was ordered by Sept. 30, USFWS confirmed with EnviroNews that it did make the filing deadline despite waiting five days to make a public statement.

USFWS deemed the tortoise “not warranted” for listing under the Endangered Species Act (ESA) in its release stating, “After reviewing the best available scientific and commercial information, the U.S. Fish and Wildlife Service finds that the Sonoran desert tortoise does not face the threat of extinction and will be removed from the Endangered Species Act (ESA) candidate list.”

WildEarth Guardians’ Taylor Jones responded to USFS’ announcement stating, “The Service’s new motto seems to be giving the benefit of the doubt to extractive industries and unenforceable conservation agreements, rather than to imperiled species. We’ll be looking closely at this decision to make sure that’s not the case for the desert tortoise.”

Part of the desert tortoise species has been protected under the ESA since 1989 but, as for now, the Sonoran species will not enjoy the same luxury. In recent years, scientists discovered the tortoise population in the Sonoran desert actually had unique behaviors and DNA — resulting in them being distinguished as an entirely new species.

The rest of the desert tortoise species is referred to as Gopherus agassizii, and is distributed throughout western Arizona, southeastern California, southern Nevada, and southwestern Utah, whereas the Sonoran is located exclusively east of the Colorado River in Arizona, and in the Mexican states of Sonora and Sinaloa. The Mojave distinct population segment is listed as “threatened” to this day, while researchers are exploring the possibility of another potential break-off for a third species in Sonora and Sinaloa.

Today’s decision comes on the heels of a similar announcement late last month to not protect the greater sage grouse under the ESA, in what some have argued was the most epic wildlife battle in U.S. history — both politically, and financially. USFWS has been doing this a lot lately — that is, announcing there is no need to protect species under the ESA. The question many biologists and environmentalists are asking: Are the decisions to not list these animals the right ones?

DOI and USFWS have pumped up the tortoise, sage grouse, and other similar decisions as “conservation success stories,” saying these situations reflect scenarios wherein the mere threat of an ESA listing worked to save animal populations through “collaborative,” on-the-ground efforts at the state level and in the private sector. Critics of DOI’s recent announcements do not agree with that logic, and do not partake in the celebratory parades pumped up by DOI surrounding the decisions.

Jones criticized USFWS in her statement on the Sonoran tortoise saying, “the Service has a disturbing history of using small amounts of uncertainty to deny needed protections to species facing clear threats.”

Two groups, WildEarth Guardians and Center for Biological Diversity, are in and of themselves, responsible for many of the species receiving attention for potential ESA listing today. Following an unparalleled decade-long lawsuit and unprecedented legal settlement, USFWS agreed in 2011 to move forward with protection of some 800 previously neglected species.

In the wake of today’s announcement on the Sonoran desert tortoise, many are wondering if the USFWS will wind up back in court again for its lack of action on yet another imperiled wildlife species in the West.