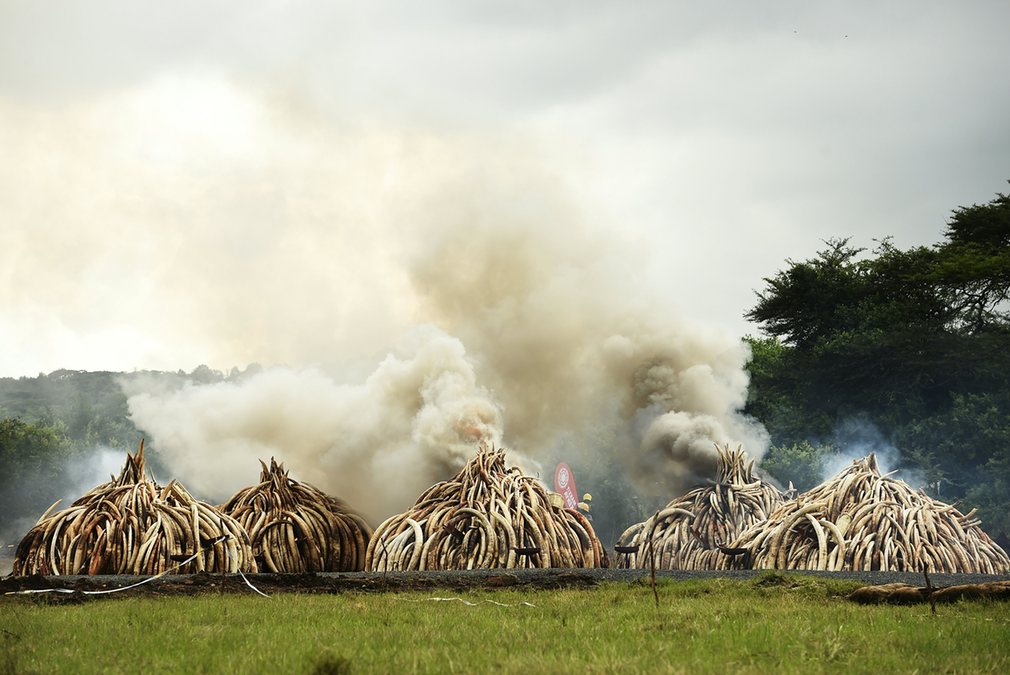 (EnviroNews Polls) — Nairobi, Kenya — The biggest ivory burn in world history went down in Nairobi, Kenya on April 30, 2016, in a ceremony emceed by the country’s President Uhuru Kenyatta. The event was conducted in hopes of sparking an international ban on ivory trading, and to call on the global community to help Kenya stop the hemorrhaging in its own elephant poaching crisis.

Many similar elephant tusk fires have been set ablaze throughout Africa to send a messages to ivory traders, and in efforts to make even the smallest of dents in worldwide ivory stockpiles, but Kenya’s massive burn last weekend was seven times the size of any such previous fire, and destroyed 5% of the world’s ivory stockpiles in one fell swoop.

“Kenya is making a statement that for us ivory is worthless unless it is on our elephants. This will send an absolutely clear message that the trade in ivory must come to an end and our elephants must be protected. I trust that the world will join us to end the horrible suffering of our herds and save our elephants for future generations,” Kenyatta stated to a sizable crowd before commencing the event by lighting up the first of 11 massive pyres.

This might all sound like a great move for elephants and the environment, and countless people the world over are hailing it as such, but some environmentalists and conservationists, as well as a few of our readers are saying “not so fast.”

While Kenyatta’s dramatic move is being largely applauded across the board, some conservationists contend that dealing with the stockpiles of ceased ivory this way will only create a deficit in the market — driving up prices, and encouraging poachers and black market pirates even more.

“The traders will see 5% less ivory available to be released to them. Their response will be: ‘They’re taking this seriously, they’re never going to release this ivory to us, we must go and collect more from elephants,” said environmental economist Mike Norton-Griffiths.

The EnviroNews World News story on the event drew mixed feelings and comments from our readers, and it is those diverse opinions that have given birth to this poll. Therefore, we put it to you, our valued reader: Will Kenya’s huge controversial ivory bonfire help stop elephant poaching? Yes or no? Please vote via Twitter or Facebook in the poll just below.

Additionally, to find out more information on this story, please visit the EnviroNews World News article, released on the day of the massive bonfire, in the embedded link below the poll voting. We thank you in advance for your vote.

(EnviroNews World News) – Nairobi National Park, Kenya – The biggest elephant-ivory bonfire in world history went down in Nairobi National Park in Kenya on April 30, 2016. The country hosted the event in hopes of shocking the world into doing more to help protect the iconic…