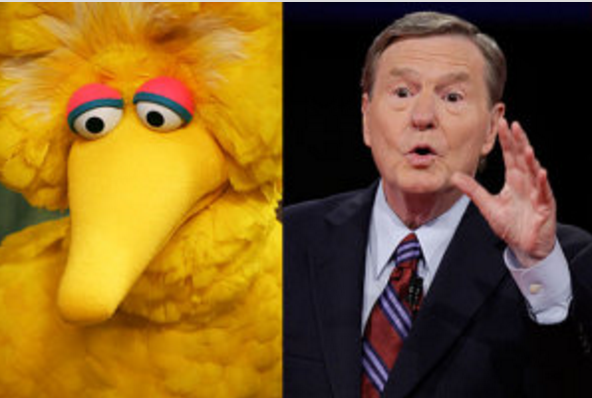 (EnviroNews Polls) — The Corporation for Public Broadcasting (CPB), which provides funds to the Public Broadcasting Service (PBS) and National Public Radio (NPR), costs the American taxpayer $445 million every year, or about $1.37 per U.S. citizen; four Marine B-class F-35 fighter jets cost those same taxpayers $490 million. And while President Donald’s Trump’s newly proposed budget harbors plenty of line items for the F-35 fighter jet and other defense expenditures, it aims to slash funding for Big Bird and all of his PBS friends entirely — friends like PBS News Hour, NOVA, PBS Nature, Austin City Limits and many more.

Meanwhile, several publications have pointed out that the annual cash required to cover Trump’s Mar-a-Lago trips and other travels, coupled with the expenses to protect and First Family including Melania Trump in New York, will exceed the cost of funding either NEA or NEH. Several news organizations have estimated Trump-Family security and traveling expenses are running at six to ten times the averaged rate for President Obama. Nevertheless, Trump seems content to slash and burn Big Bird’s budget while he, our “very rich” president, has fun flying back and forth to the “Winter White House” to play golf and hang out with friends.

At the same time, the F-35 fighter jet program wears a price tag of $400 billion dollars and takes the prize for the most expensive weapons program ever. The plane has been fraught with problems from the get-go, and has been called a lot of very bad names — especially by Pierre Sprey, the lead designer of the infamous F-16 (which has beaten the F-35 in head-to-head dogfighting simulations). “It’s inherently a terrible airplane, because it’s an airplane built for a dumb idea… In dogfighting, it’s hopeless,” said Sprey. “The point of this airplane is to spend money. That is the mission of the airplane, is for the U.S. Congress to send money to Lockheed. That’s the real mission of the airplane.”

But whether or not you agree with splurging hundreds of billions of dollars on a highly controversial military jet — that’s your choice. It’s also your choice whether you agree or not with the federal government doling out financial support for public broadcasting. If you are undecided about this matter, take a listen to Fred Rodgers, a.k.a. Mr. Rodgers, addressing Congress in 1969 about the need for public broadcasting. Then, please cast your vote in the official opinion survey below via Twitter or Facebook.

Are you willing to part with $1.37 per year for public broadcasting? Yes or no? Please vote below via Twitter of Facebook.