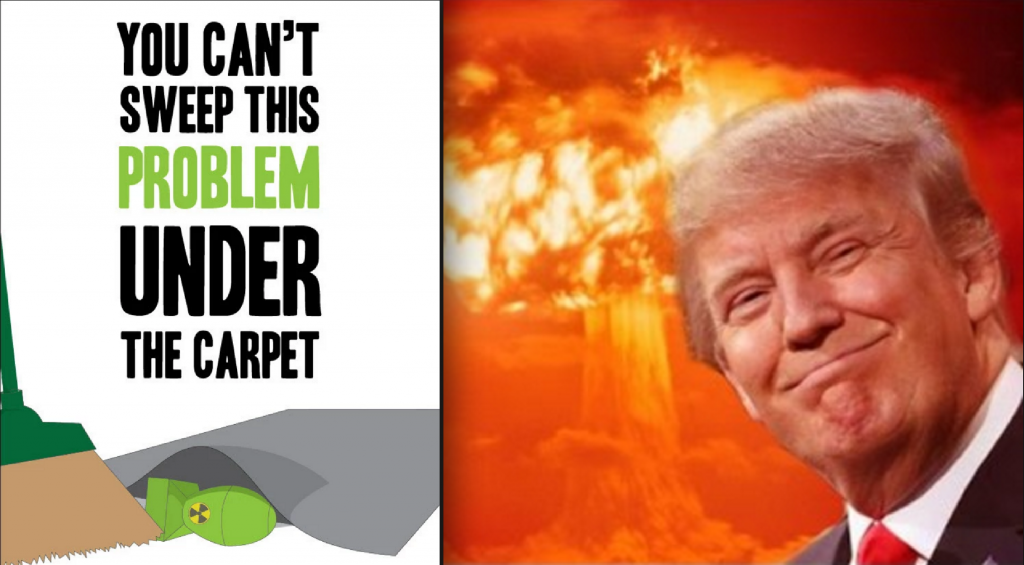 (EnviroNews DC News Bureau) — Washington DC — Building nuclear bombs is a nasty business that leaves behind a lethally toxic waste-stream, whether the bombs are ever detonated or not. After generating tons upon tons of hot nuclear waste during World War II and for many years after, the U.S. Government promised the American public it would clean up the Manhattan Project-era mess – including some of the most radioactively contaminated locations in the country. The Government handed the job over to the U.S. Department of Energy (DOE), and the DOE still oversees the most radioactive projects: 16 active cleanup sites, some of which are riddled with problems even today. But now, Trump’s administration has announced it wants to renege on those promises to clean up the Government’s bomb-making disasters, leaving environmentalists and everyday citizens outraged and fighting back.

The DOE is proposing a reclassification of high-level nuclear waste to low-level nuclear waste — a move that would buck the current law and circumvent the United States Nuclear Regulatory Commission’s (NRC) authority and expertise in nuclear waste classification. Critics say the policy shift would jeopardize the lives of American citizens now and long into the future. While the DOE does not need congressional approval to make the change, the Administration has opened up a comment period, encouraging the public to weigh in.

“DOE proposes to reinterpret not only its own definition of high-level waste, but it proposes to reinterpret the statutory definition of high-level waste,” wrote U.S. Senator Ron Wyden (D) from Oregon, who also pointed out that more than 72 organizations had requested an extension to debate DOE’s proposal. The current statutory definition includes “the highly radioactive material resulting from the reprocessing of spent nuclear fuel, including liquid waste produced directly in reprocessing… [it] also includes any other highly radioactive materials that the NRC may define as high-level.”

The DOE issued the call for comments on its plan to reclassify high-level nuclear waste as low-level on October 10, 2018. Initially, the DOE planned a 60-day comment period that included the Thanksgiving holiday. However, the agency extended the allotted timeframe until Jan. 9 after receiving Wyden’s letter.

Of course, the DOE’s new extension does not take into account the Christmas and New Year’s holidays or the partial government shutdown, which could affect the agency’s ability to receive comments, as noted by the Federal Register itself via the website: “If FederalRegister.gov experiences a system outage, we will not be able to restore service until funding is provided.” The Federal Register is the official place to find notices about comment periods and information on how to submit comments.

The DOE says the proposed reclassification would save $40 billion. Critics of the plan say the change would save the DOE decades of work because it would allow the agency to simply leave the waste where it lies. A large portion of that waste sits underground at Washington State’s Hanford Nuclear Reservation in massive, leaking containers, posing a threat to the Columbia River and surrounding ecosystems.

“Changing the name of high-level nuclear waste does not change how contamination will spread from Hanford’s high-level nuclear waste tank farms, nor does changing the name of the waste prevent the cancer that future generations will suffer,” said Washington State Representative Gerry Pollet in a press release. Pollet also serves as Executive Director of Heart of America Northwest, a Hanford watchdog group.

Hanford isn’t the only site to be affected though. The DOE’s Office of Environmental Management is self-proclaimed to be “the largest environmental cleanup program in the world” and is responsible for dealing with the 16 active cleanup sites, which include Hanford Richland Operations Office ($64.54 billion through 2075) and its companion site Office of River Protection ($77.22 billion, 2075), Savannah River Site ($115 Billion, 2065), and Paducah ($41.07 billion, 2070). The ability to reclassify wastes, like those in tanks at Hanford, would allow the DOE to ship those materials to facilities set up to deal with lower-level wastes or just to leave the waste in the ground where it currently sits.

“The cleanup of [Hanford] is really at stake,” Tom Carpenter of Hanford Challenge, another nuclear watchdog group told the Associated Press about the proposed change. “[There] is not much point in doing much else if they don’t clean up the high-level waste.”

Hanford contains the nation’s largest collection of nuclear waste and occupies a site near the environmentally sensitive Columbia River – an area susceptible to earthquakes, volcanic eruptions, and flooding. In addition, the site is currently hindered by a runaway plutonium leak, previously covered up by Hanford executives and eventually exposed by investigative reporter Susannah Frame of NBC’s local affiliate King 5 in the series Hanford’s Dirty Secrets.

The Government’s nuclear waste cleanup efforts have been hampered further by a plutonium/americium explosion that happened at the Waste Isolation Pilot Plant (WIPP) in New Mexico. Radioactive material was spewed into the air through a ventilation shaft in 2014, and WIPP will not be fully operational again until 2021 according to a 2016 L.A. Times report. The same article states that Washington and Idaho have faced delays in the removal of thousands of drums of nuclear material due to the incident.

According to its website, “WIPP is the nation’s only repository for the disposal of nuclear waste known as transuranic, or TRU, waste…. Disposal of transuranic waste is critical to the cleanup of Cold War nuclear production sites. Waste from DOE sites around the country is sent to WIPP for permanent disposal.” The contract to replace the ventilation system was just awarded on Nov. 19, 2018 and is the “key to restoring full operations at the WIPP facility” according to WIPP’s own press release, which confirms the 2021 target for completion.

The NRC defines TRU waste as “materials contaminated with… artificially made, radioactive elements, such as neptunium, plutonium, americium, and others—that have atomic numbers higher than uranium in the periodic table of elements.” The U.S. is the only country that uses this designation for nuclear waste, and it is different than high-level nuclear waste, which is “materials produced as byproducts of fuel reprocessing or of the reactions that occur inside nuclear reactors.” WIPP deals with TRU waste and not high-level waste as defined by the NRC.

In 2017, the U.S. Government Accountability Office (GAO) wrote, “as part of its commitment to nonproliferation, the United States is planning to dispose of 34 metric tons of weapons-grade plutonium. The Department of Energy is looking into whether this plutonium could be diluted and disposed of at a geologic repository [WIPP] for defense waste in New Mexico. Since this repository can only accept a limited amount of such waste, we recommended that the department develop a plan for expanding disposal space at this repository.”

All of this begs the question: If WIPP is the country’s only disposal site that might be able to take high-level waste (though its design is for contaminated items and not liquid waste), and it’s been shut down, just where is the waste that was “cleaned up” over the last four years? Well, according to the GAO, much of the high-level nuclear waste continues to sit idle at one of the 80 sites where it was generated. In 2014, World Nuclear News reported some of the waste that DOE contracted to remove from the Los Alamos National Laboratory was sent to a temporary site in Andrews County, TX, operated by Waste Control Specialists.

The U.S. Government tried to open a long-term repository at Nevada’s Yucca Mountain, which resulted in several legislative belly flops. At present, there is currently NO solution to deal with the Government’s high-level nuclear waste problem. Even when WIPP becomes fully operational, the DOE still faces the prospect of finding a viable and acceptable storage solution, which to this point it has failed to do, leaving thousands of tons of radioactive nuclear waste in temporary storage units that are decaying, leaking, and creating a more difficult problem to deal with now and into the future.

“(a) Email: Send comments to [email protected] Please submit comments in Microsoft Word, or PDF file format, and avoid the use of encryption.
(b) Mail: Send to the following address: Theresa Kliczewski, U.S. Department of Energy, Office of Environmental Management, Office of Waste and Materials Management (EM-4.2), 1000 Independence Avenue SW, Washington, DC 20585.”
Mail will be considered if postmarked on or before Jan. 9, 2019.

The DOE website says: “The Energy Department is committed to a safe, complete cleanup of the environmental legacy of five decades of government-sponsored nuclear weapons development and nuclear energy research. As part of this mission, we safely and cost-effectively transport and dispose of low-level wastes; decommission and decontaminate old facilities; remediate contaminated soil and groundwater; and secure and store nuclear material in stable, secure locations to protect national security.”