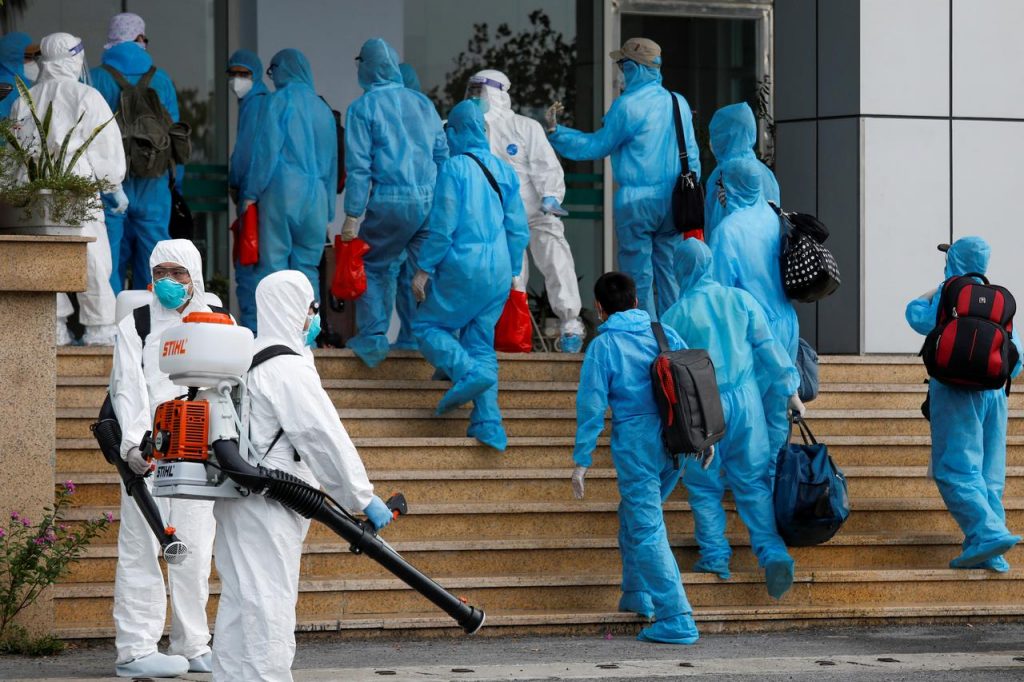 (EnviroNews World News) — Da Nang, Vietnam — After being praised for having the most successful coronavirus response on Earth, and after having been COVID-19-free for over three months, Vietnam has been surprised by 47 new cases of the disease spanning six cities and regions.

The outbreak started when a 57-year-old grandfather, known as “Patient #416,” who hasn’t traveled to other provinces and who has been in the city of Da Nang for about a month, was diagnosed with the disease on July 23, 2020. Authorities suspect the man caught the virus from people illegally entering the country. According to the Sun, the man has been on a ventilator as of July 27.

Da Nang, located on the South China Sea, attracts many domestic tourists. The city, along with the rest of Vietnam, was in the process of reopening when the recent flare-up was discovered.

When the outbreak started, the first 16 cases ranged in age from 24 to 70, and were confirmed positive between July 23 and 27, according to Time. Acting Health Minister Nguyen Thanh Long said that the contagion likely came from different sources in the community. Four of those who tested positive were medical personnel at the Da Nang Hospital where COVID-19 patients are treated.

The Vietnamese government said genome analyses have revealed that these new cases were caused by a more contagious strain of the virus, not previously detected in Vietnam. The strain marks the sixth variety of the virus observed in the country. “This is a new type of COVID-19, which is more infectious,” said Long.

As of July 30, the number of cases related to the Da Nang outbreak has risen to 47, and some are saying this third wave is untraceable. There are new coronavirus patients in Hanoi, Ho Chi Minh City, the Central Highlands and three other areas.

“Everyone, including health workers, had let their guard down months before the reintroduction of the virus,” said Truong Huu Khanh, head of the infectious diseases department at the Nhi Dong 1 Hospital in Ho Chi Minh City, according to Reuters. “People had stopped wearing masks in public and some health workers didn’t pay enough attention to ‘high risk’ cases.”

Implementing the same protocols that worked during the first wave, Vietnam, which shares a border of 795 miles (1280 km) with China, is locking down three hospitals and quarantining about 7,000 people for the next 14 days. Prime Minister Nguyen Xuan Phuc has ordered mass testing for Da Nang. Six of the city’s eight districts are now under stay-at-home orders for the next 15 days; people may only leave their residences for essential reasons, including getting groceries and going to factories to work. Social distancing of over six feet (2 m) is also required.

“We acted fast and fiercely back in March but the virus is still breaking out all over the world,” said Khanh. “We can’t let our guard down. This third wave is the cost for a moment of complacency.”

All domestic flights in and out of Da Nang have been canceled after the evacuation of around 80,000 tourists was completed. However, not everyone made it out of the city before air travel was suspended.

“We did not want to rush to the airport to leave the city because of the risk of being in a crowded place. So we are now stuck here,” Lien Nguyen, who is traveling with her family of four for their summer vacation, told the Associated Press. “But it is not a bad place to get stranded for two weeks.”

Reuters reports that Vietnam’s 150 cases of coronavirus over the last three months were foreign workers, who had been quarantined upon arrival. The country has 446 cases as of July 28, 2020 with 369 recovered and no deaths, according to the state-run Vietnamplus. Vietnam isn’t the only country to seemingly get the virus under control only to have cases rise again. Germany, South Korea, and China have also had new outbreaks.

“The pandemic is still quite active worldwide and controlling it remains challenging,” David Aronoff, Director of the Division of Infectious Diseases at Vanderbilt University Medical Center, told NPR. “The majority of people around the world are still susceptible to this infection, so new waves of activity can occur if a single case enters a population where disease was previously tamped down.”

“Public health experts describe Vietnam’s initial response as a textbook example of how to deal with an infectious disease outbreak,” reports Matthew Tostevin of the Associated Press. Nevertheless, the recent resurgence serves as a reminder that no community remains safe from coronavirus, no matter how vigilant its leaders and residents may have been at any time in the past. “Quarantine fatigue” is a feeling many continue to describe as the pandemic stretches into its eighth month. However, when it comes to practicing personal pandemic safety precautions, falling asleep at the wheel can be deadly.

As reported earlier by EnviroNews World News, Vietnam used some of the same techniques against coronavirus that had been deployed in the Vietnam War. Artists created posters to spark a nationalistic feeling and encourage people to take the appropriate precautions. These posters were understood because they used a style that people were used to seeing. The government issued postage stamps depicting the behaviors people should adopt to prevent coronavirus transmission, and it deployed its military and Communist spies to prevent people from breaking quarantines and evading regulations. Unlike in the U.S. and other countries, Vietnam also fines people for posting false information about the virus on social media.

OTHER COVID-19 REPORTING BY ENVIRONEWS

(EnviroNews USA Headline News Desk) – Grundy County, Iowa – “They have it all sealed off, insulated, and they’re pumping in steam from the machine outside. And they are going to roast the pigs alive in this sauna.” Those were the words coming from an investigator in a video…

(EnviroNews World News) – While researchers stress that smoking is dangerous to health and likely to kill the smoker, they have found one surprising benefit for those who use tobacco: it appears that smoking may inhibit the contraction and development of COVID-19, a.k.a. coronavirus. According to The Guardian, at…

0 Deaths: Vietnam Kicked Butt on Tamping down COVID-19 Outbreak, and Vietnam War Techniques Were Part of It

(EnviroNews World News) – Of Vietnam’s approximately 97 million citizens, only 270 have been confirmed positive for coronavirus (COVID-19) and with 225 cases resolved, not one person has died as of Apr. 26. While some may question these numbers, Dr. John MacArthur, the U.S. Centers for Disease Control and…

COVID-19 Response: There’s a Reason NY Has 2.5 Times the Cases and Deaths of CA (and it’s Not Geography)

(EnviroNews DC News Bureau) – Both New York (ranked fourth by total population) and California (ranked first) harbor huge populations compared to other U.S. states, and both were visited by millions of foreign travellers in the months leading up to the COVID-19 outbreak that started in January. However, New…

True or False? Toilet Paper Shortage is Caused by Panic-Buying (The Real Reason Behind the US TP Problem)

(EnviroNews USA Headline News Desk) – As lockdowns due to the COVID-19 virus continue to roll out across the United States, many people are scared and some are looking at ways to profit from that fear. In the center of it all is toilet paper. While empty shelves have…