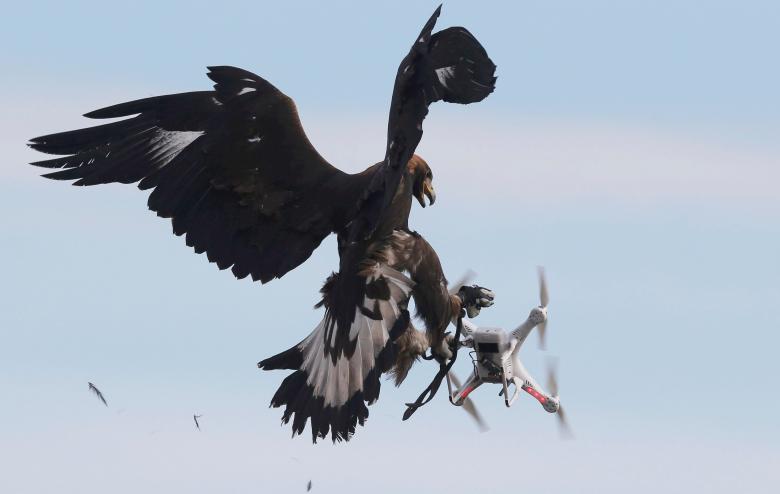 (EnviroNews World News) — The French Air Force is taking drone defense to a whole new level. Their state-of-the-art weapons: four golden eagles (Aquila chrysaetos). Yes, you did read that right, as in the living bird, and this aerial quartet has been trained since birth to take out drones and defend critical French airspace.

Athos, Porthos, Aramis, and D’Artagnan, those are their names, and taking down threats from the sky, well, that’s their game. Named after the four protagonists from the Three Musketeers, these powerful predators are prepared to engage any enemy drone in an airborne dogfight.

The idea of eagle defense was hatched after several drones were flown over the presidential palace in 2015. Following the episodes, the military realized it had to come up with something to combat small unmanned aircraft that could be carrying spy technology, or even worse, an explosive device — and the military’s concerns aren’t unwarranted.

The Associated Press reported that only weeks ago, “on the other side of the world, Iraqi soldiers fired their guns wildly into the sky after a small drone dropped a bomb on them. Terrorists have been modifying devices that can be bought in toy stores into weapons and radio-controlled spies.”

But the French weren’t the first to think of training birds of prey for drone defense; they were actually inspired by the Dutch National Police who made a video of their eagle taking down a DJI camera drone. The bird was acquired from the Hague-based business Guard From Above, which refers to itself as “the world’s first company specialized in training birds of prey to intercept hostile drones.”

People might be wondering: exactly how were the French’s eagles trained “since birth” to seek and destroy drones? The answer to that question is an innovative one. The birds were actually hatched and reared right on top of drone wreckage. This instilled a natural instinct to hunt drones as if they were a food-source.

As soon the birds were old enough to fly, falconer Gerald Machoukow began teaching them to pursuit drones in flight. Each time they caught one, they were rewarded with meat, which the Washington Post reports “they ate off the backs of the drones.” The training, seems to have worked.

At a recent demonstration at an air force base in Mont-de-Marsan in southwestern France, D’Artagnan was deployed from a control tower some 200-yards away from an airborne drone. The eagle was able to arrest and pin the object to the ground in less than 20 seconds.

The French are not just planning on sending the eagle fleet into combat unprotected though, in fact, they are working on gear to shield the birds from potential injury from flying droids. “The military is designing mittens of leather and Kevlar, an anti-blast material, to protect their talons,” Agence France-Presse reported.

As magnificent as this all may seem, it certainly isn’t the first time we’ve seen an eagle or another bird of prey take out a drone — and with no training at all. In 2015, EnviroNews World News covered a story where an Australian wedge-tailed eagle (Aquila audax) took down a drone. In that article, several other videos are also displayed where raptor birds from around the world instinctively took down what they apparently saw as hostile threats.

Agence France-Presse also reported the French armed forces are planning on expanding their eagle fleet and have already ordered another batch of eggs.

(EnviroNews World News) – Victoria, Australia – Aquila audax, or the Australian wedge-tailed eagle, is one of the largest and most powerful predatory birds sailing the skies above planet earth to be sure, but what one member of the species did in this video is simply something you…

Ya’ Think Hummingbirds Have the Fastest Birds Wings? (Not Even Close) – Wings So Fast They Sing Like Violins

(EnviroNews Nature) – When we think of wings we think of flying – not music. Yet one of the world’s most unusual birds has evolved to sacrifice many of flight’s benefits, in exchange for song. It’s true that nearly all wings are designed to favor one attribute of…

Breathtaking Video: Bet These Scarlet Macaws Can Bring a Tear To Your Eye