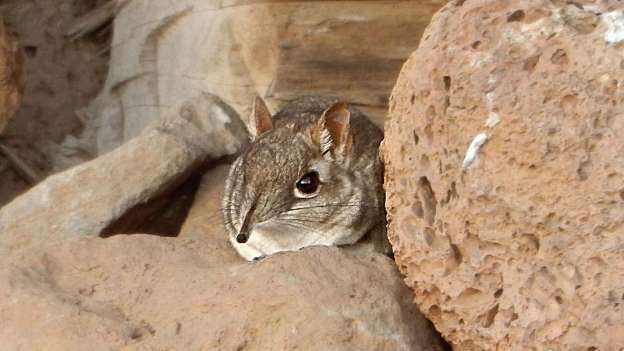 (EnviroNews World News) — Djibouti, East Africa — Missing for over 50 years and classified as “extinct,” scientists in the Republic of Djibouti have confirmed the capture of eight Somali sengi (Elephantulus revoilii), commonly known as the Somali elephant shrew. The scientists also saw four others while out collecting specimens from their traps. The creature is now numbered among the “lazarus taxa,” which are species that were thought to be extinct but, like Lazarus, have seemingly risen from the dead.

While locals had long contended they had seen the tiny animal roaming the rocky terrain, they could not provide proof. This was the first confirmed sighting of the mouse-sized Somali elephant shrew since 1973. Characterized by its big eyes and long snout, scientists were ecstatic when they grabbed the first video of the “charismatic microfauna [or] cute little animal” for scientific purposes. Their findings were published in Peer J on Aug. 18, 2020.

“We did not know which species occurred in Djibouti and when we saw the diagnostic feature of a little tufted tail, we looked at each other and we knew that it was something special,” Steven Heritage, a research scientist at the Duke University Lemur Center in Durham, told the BBC.

The research team set 1,259 traps and used a mixture of peanut butter, yeast, and oatmeal as a lure. To add to the good news of finding a “lost” species, the habitat for these Somali elephant shrews appears to be in no danger; it’s rocky and far from human developments and farms.

“This is a welcome and wonderful rediscovery during a time of turmoil for our planet, and one that fills us with renewed hope for the remaining small mammal species on our most wanted list, such as the DeWinton’s golden mole (Cryptochloris wintoni), a relative of the sengi, and the Ilin Island cloudrunner (Crateromys paulus),” said Global Wildlife Conservation’s Robin Moore. The organization can take the Somali sengi off its list of 25 “most wanted lost species.”

Before the discovery, information about the Somali elephant shrew came only from historic documents, 39 examples in museums, and inferences based on the lifestyles and habits of others in the sengi species. Scientists are now able to study the animal in situ, testing their hypotheses and correcting possible misinformation

“For Djibouti this is an important story that highlights the great biodiversity of the country and the region and shows that there are opportunities for new science and research here,” said Houssein Rayaleh, a Djiboutian research ecologist and conservationist who joined Steven Heritage on the 2019 exploratory trip.

More closely related to elephants, manatees, and aardvarks than shrews, Somali sengis use their trunk-like nose to feast on insects. The researchers reclassified the animal scientifically as “Galegeeska revoilii” because the earlier classification in “Elephantulus” was based on questionable evidence from a specimen obtained in the 1800s. The newly collected specimens provide a more complete picture of the Somali elephant shrew’s genealogy. “Geeska” is Somali for “corner or horn,” acknowledging a wider distribution of the animal than previously thought. “Gale” is Ancient Greek for “weasel” and does double duty as a reference to scientist Galen B. Rathbun (1944–2019), who spent more than 40 years studying sengi biology.

“In a single expedition to a part of Africa that is challenging to work in, the team has achieved remarkable success. Not only has it formally documented the continued existence of the Somali sengi for the first time in 50 years, but has also corrected our understanding of the species’ genus,” said Andrew Taylor, Chair of the International Union for the Conservation of Nature’s (IUCN) specialist group covering sengis.

Even though scientists are still amassing basic knowledge of the creature, like its habitat and communication behaviors, the elephant shrew is a lot older than it looks — at least in terms of the species.

“It goes back at least 45 million years, possibly much longer,” Heritage told NPR. The Somali sengi predates lions, giraffes and zebras as well as many other animals that didn’t appear until about 20 million years ago.

Other animals that have been declared extinct and rediscovered include the armored frog (Litoria lorica), the black-footed ferret (Mustela nigripes), and Leadbeater’s possum (Gymnobelideus leadbeateri). Most recently, the Vietnam mouse-deer (Tragulus versicolor), last seen after a hunter killed one in 1990, was recently found in the wild, as reported by EnviroNews on Jan. 12, 2020.

(EnviroNews World News) – Amid the “sixth mass extinction,” or “Holocene extinction” as it is referred to by scientists, there are few glimmers of hope or good news. Species are dropping off the planet like flies, and despite the best efforts of government entities, NGOs and devoted conservationists,…

‘Conservation Success’: Once ‘Extinct’ Scimitar-Horned Oryx Returned to the Wild in N. Africa

(EnviroNews World News) – Gone but not forgotten, and now returned to the wild. Five thousand years ago, as many as one million scimitar-horned oryx (Oryx dammah) grazed the steppes and subdeserts of North Africa. The white-bodied antelopes with russet necks are well adapted to this hot, arid…