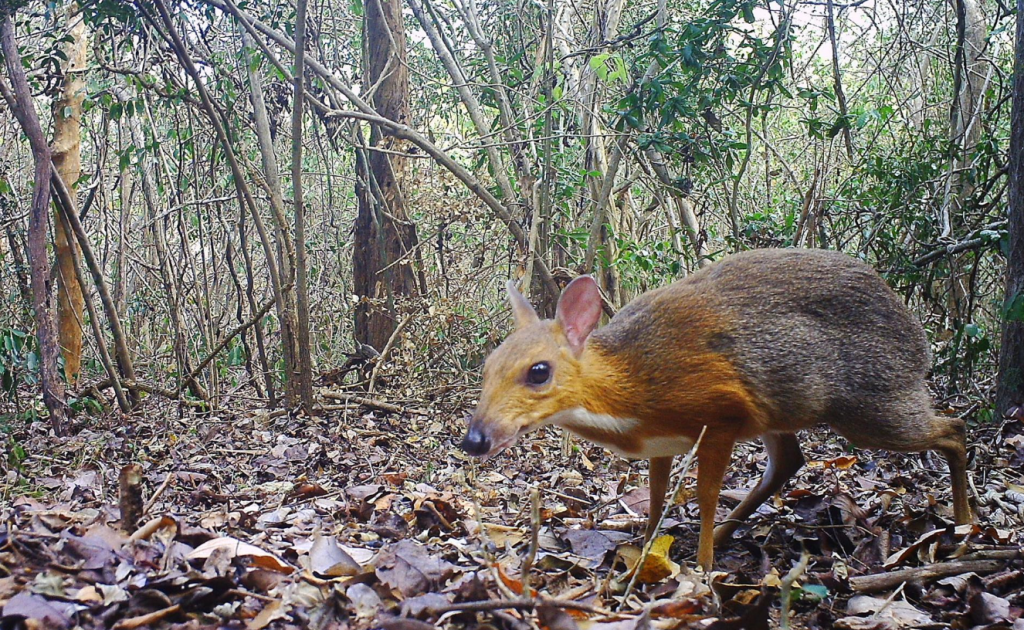 (EnviroNews World News) — Amid the “sixth mass extinction,” or “Holocene extinction” as it is referred to by scientists, there are few glimmers of hope or good news. Species are dropping off the planet like flies, and despite the best efforts of government entities, NGOs and devoted conservationists, Earth’s creatures simply aren’t adapting fast enough. But now and again, something quite mystifying occurs when biologists confirm the living presence of a Lazarus taxon — a species, that as the name suggests, has been seemingly raised from the dead. That is now the story of the silver-backed chevrotain (Tragulus versicolor) as scientists confirmed that camera traps have captured images of the long-lost animal, marking the first time researchers have seen one in a generation.

Also known as the Vietnam mouse-deer, the silver-backed chevrotain was, and now is once again, the world’s smallest hooved animal. Weighing in at about the size of a house cat, and baring two healthy fang-like incisors and a silver sheen on its rump, the planet’s tiniest ungulate had been lost for nearly three decades — but no longer.

Even though science had deemed the species “extinct,” some people suspected it might still be around due to multiple sightings reported by local villagers over the years. Unfortunately, lacking in technology and smart phones, no one had captured any evidence to prove it. But that all changed when a team of wildlife researchers from Vietnam, Europe and the US obtained photos of this tiny mouse-deer, sparking excitement, and prompting talks about new conservation efforts.

In an age of mass extinctions, confirming the survival of lost species provides rare second chances for biodiversity conservation. The silver-backed chevrotain, a diminutive species of ungulate known only from Vietnam, has been lost to science for almost three decades. Here, we provide evidence that the silver-backed chevrotain still exists and the first photographs of the species in the wild, and urge immediate conservation actions to ensure its survival.

Little is known about this tiny chevrotain, but researchers suspect that males use their large tusks to compete for territory and breeding rights. 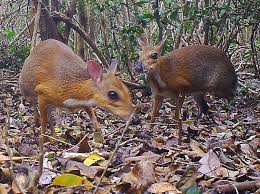 “It’s a really cool species, and we’d long hoped to find proof they were still around,” said Andrew Tilker, a biologist specializing in Southeast Asian wildlife at Global Wildlife Conservation, to National Geographic in an interview.

WANT TO FIND A LOST SPECES? USE THE LOCALS AS YOUR MAP

Members of the team also told NatGeo they feel the techniques they deployed could be adapted to help locate other “lost” species suspected to still exist.  The cornerstone of the method?: use the locals as your map.

The last known silver-backed chevrotain was collected in 1990 when a hunter shot and killed it and donated the remains to science. The only other specimens ever collected from this species came in 1910, and it is not known from exactly where.

Since the 1910 specimen is from unknown origin, the team decided to start in the southern beach city of Nha Trang. Camera traps in Vietnam’s wet tropical forests have failed to ever record a silver-backed chevrotain, thus Tilker and his colleagues suspected the animal may prefer a dry, thorny forest environment instead. They set out and started asking local hunters for help.

The primary threat to Vietnam mouse-deer, and what has brought them to the brink of extinction, is the illegal widespread deployment of wire snares set by hunters in the region. Because of this, many locals were reluctant to talk to Tilker and the team, and it took time for the researchers to gain their trust. But despite their hesitancy, some residents wanted to speak up because they themselves have become worried about the disappearance of wildlife before their very eyes over a short period of time.

“People have become very concerned about how much wildlife has vanished in the past five to 10 years,” An Nguyen of Global Wildlife Conservation said. “They know it’s because of overhunting and the use of snares.”

After some time and relationship building, residents finally took Nguyen and other team members to places where they claimed they had seen the missing mouse-deer. There, they sat up camera traps which remained in place from November 2017 through July 2018. In that time the traps snapped photos of the adorable little ungulate 280 separate times.

“I was overjoyed when we checked the camera traps and saw photographs of a chevrotain with silver flanks,” Nguyen said.

The researchers admit it was very difficult to identify individual specimens from the trap photos and that many of the 280 encounters may have been repeat sightings.  With that considered, a mystery remains regarding the actual number of these cute critters that do still exist in the wild — and on all of planet Earth for that matter.  And that mystery leaves unanswered questions about exactly what should be done to save and recover this spectacular species — a species science thought was gone forever.

Unfortunately, it’s not only the silver-backed chevrotain that’s been driven to the brink of extinction by snare-hunting in Vietnam.  NatGeo also reported that other deer like the saola (Pseudoryx nghetinhensis), a.k.a. the “Asian unicorn,” and the large-antlered muntjac (Muntiacus vuquangensis), have also taken heavy hits.

The reason for all of these snares is the demand for illegal bushmeat. Snares have a particularly devastating impact due to their indiscriminate nature — the way they “catch and kill nearly everything that walks on the forest floor,” as NatGeo puts it.  The overhunting problem has become so severe that it has created a phenomenon ecologists are now referring to as “empty forest syndrome” — which even to the most scientifically uneducated, probably doesn’t sound good.

CONSERVATION: HOW TO SAVE THE SPECIES FROM HERE

Another noteworthy thing about the rediscovery of the silver-backed chevrotain is that it marks the first species to be discovered under the Search for Lost Species, a program created by Global Wildlife Conservation. The initiative aims to rediscover some 1,200 species of plant and animal, considered extinct, but thought to still exist somewhere in the wild.  Tilker said not all the missing species are glamorous and that many just need someone to start paying attention. “We shouldn’t give up on them just because we haven’t seen them in a long time,” he insists.

One of the biggest challenges in saving the Vietnam mouse-deer is the fact that virtually nothing, barring the most basic of behaviors, is known about the species.  Another obstacle is presented by the ever-present reality that the political bureaucracies behind enacting regulations and protective measures are oftentimes years or decades out of step with the urgency needed to save a species from decline.

What is known about these chevrotains is that they seem solitary, and quietly, cautiously tiptoe around the forest on their hooves and long legs foraging for fruits and other plants. 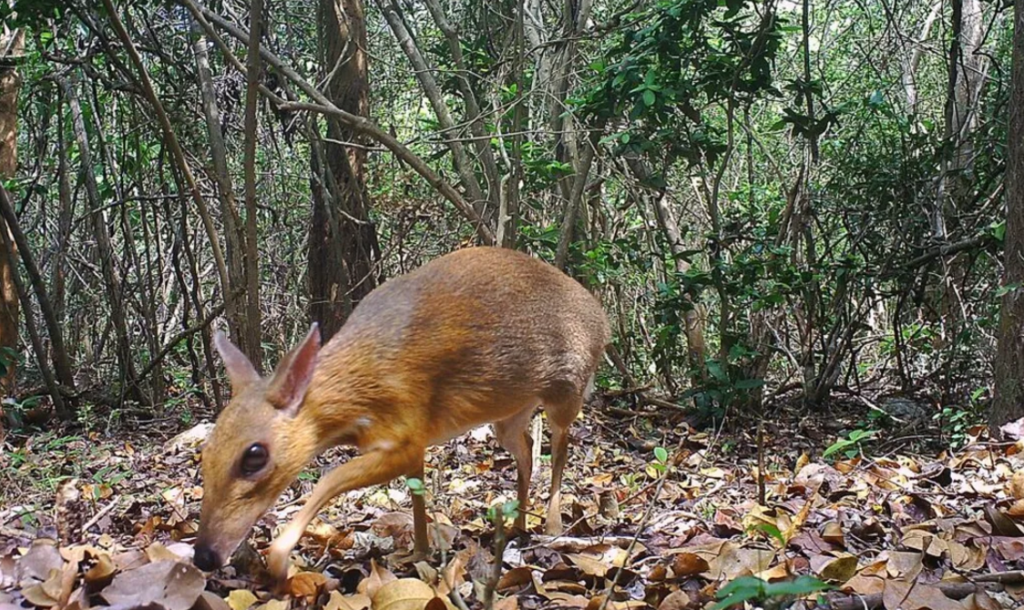 Tilker and his team are now on a mission to set up more camera traps in other dry forested areas throughout the country. Since it is completely unknown how many of these creatures still exist and exactly what their range is, the first step is simply to get their conservation status upgraded from “data deficient,” to “threatened, “endangered,” or even “critically endangered.” In order for that to happen, the team needs to locate at least one or two sizable and stable populations. Only then can the slow-moving political machine start to enact protective measures like stricter criminal penalties, anti-poaching teams and educational programs aimed at locals.

“The rediscovery of the silver-backed chevrotain provides big hope for the conservation of biodiversity, especially threatened species, in Vietnam,” said Hoang Minh Duc, head of the Southern Institute of Ecology’s Department of Zoology.

For now, the team members continue their work and hope that soon they will be able to conduct the first comprehensive survey of the species, which would outline the silver-backed chevrotain’s habitat types, distribution and population size.

‘Conservation Success’: Once ‘Extinct’ Scimitar-Horned Oryx Returned to the Wild in N. Africa

(EnviroNews World News) – Gone but not forgotten, and now returned to the wild. Five thousand years ago, as many as one million scimitar-horned oryx (Oryx dammah) grazed the steppes and subdeserts of North Africa. The white-bodied antelopes with russet necks are well adapted to this hot, arid…

OTHER GREAT STORIES ABOUT DEER BY ENVIRONEWS

(EnviroNews USA Headline News Desk) – Hugo, Minnesota – Another adorable video of wildlife coming up and interacting with humans has surfaced out of Hugo, Minnesota and is picking up a lot of steam around the web. The video star this time: a curious female deer. The video…