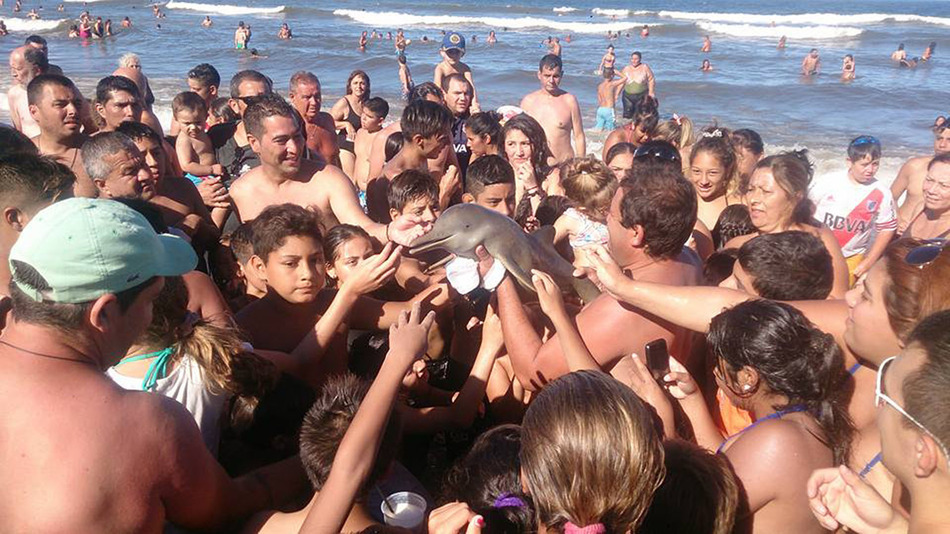 (EnviroNews World News) — Beachgoers did something downright idiotic earlier this month in the Argentinian coastal town of Santa Teresita, and many outraged environmentalists, animal rights activists and conservationists are hoping the unruly crowd learned a valuable lesson. “Idiotic” might sound like a strong word for a news article, but there are few other words a reporter can choose to adequately describe the events that transpired.

An endangered baby female La Plata dolphin was plucked from the water and passed around for petting and selfie pictures for no other reason than sheer amusement. The dolphin died shortly thereafter.

Arguably, the most asinine thing about the episode is, that after the wayward crowd had its fill of entertainment with the creature, it was left in the mud to die, with not one person thinking to return the traumatized animal to the water where it might have at least had a chance to recover.

A bystander shot video of the heartless event, as curious partiers mobbed the poor thing, ravaging it for their chance at a once-in-a-lifetime selfie, before dumping it in the muck to dehydrate and ultimately expire. The footage is being seen around the world, and has people re-evaluating humanity’s relationship with creatures of the sea.

The event has fueled a fire of outrage around the world, with countless thousands weighing in on the episode — a staggering affair that has left many shaking their heads in disgust at the human race.

Absolutely raging and appalled at all those people who killed that baby dolphin. All for a bloody selfie

How do people's minds work?

Look, there's a baby dolphin in the sea.

I know. I'll get it out of the sea and take a selfie with it.

Despite this misfortune, wildlife groups, including the Argentine Wildlife Foundation (AWF) are trying their best to transform heartbreak into a positive thing, using the affair to springboard a campaign of awareness about this rare and highly unique dolphin species. “The occasion serves to inform the public about the urgent need to return these dolphins to sea upon encountering one on the shore,” AWF said in a statement.


The La Plata dolphin, or Franciscana dolphin as it is commonly known, is listed as “vulnerable” by the International Union for Conservation of Nature (IUCN). The species is found only in Argentina, Uruguay and Brazil, and it is estimated that fewer than 30,000 remain in the wild. It is the only member of the river dolphin family that inhabits salt water instead of fresh water.

Despite the species only being listed as “vulnerable” on IUCN’s Red List of Threatened Species, experts and marine-biologists say hopes for a population recovery in this species are low due to the relentless threat of gill nets and other environmental factors the creature faces every day.