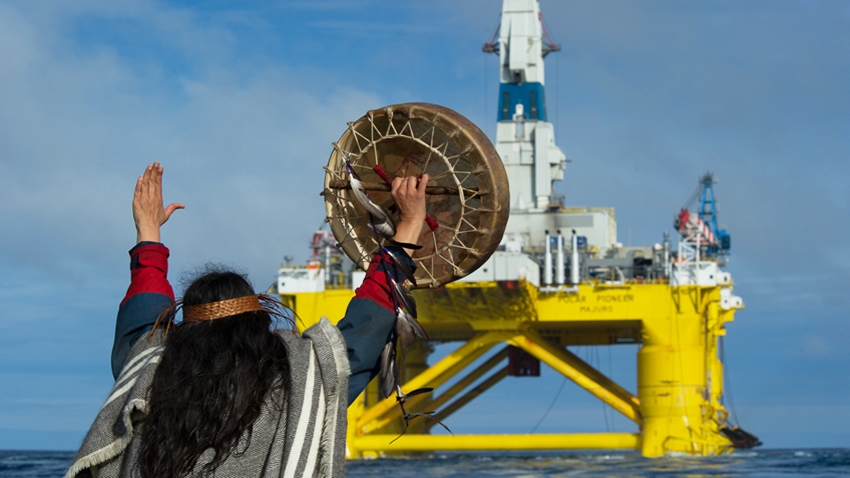 (EnviroNews World News) — British Columbia — On June 17, 2015, Native American First Nations Greenpeace activist Audrey Seigl stood on an inflatable boat, smack-dab in the path of Shell Oil’s behemoth, 300-foot-tall, “Polar Pioneer” deep ocean drill rig — with nothing but a round-drum and a feather as her protection.

The inflatable boat was launched from the Greenpeace vessel MV Esperanza as several other Greenpeace activists swam in the water behind Seigl while she put her body on the line. The protest effort seeks to save the ocean and the climate from the dangers of deepwater Arctic oil drilling.

“This morning, I faced off with Shell’s Arctic Drilling Rig the ‘Polar Pioneer.’ It was terrifying. But there are moments in life when, despite your fear, you must act,” Seigl said in a written statement published on Greenpeace’s “Save the Arctic” campaign website.

The Save the Arctic campaign powered by Greenpeace is a petition for the record books, having gathered an amazing 7 million signatures to date. Despite all those voices of opposition, Polar Pioneer rolled full steam ahead toward Seigl and the other activists today without hesitation, according to Van Observer (VO). Keith Stewart, head of Greenpeace Canada’s climate and energy campaign said, “Shell is ignoring the voices of seven million people around the world who have said yes to Arctic protection and no to Arctic drilling,” reported VO.

The Department of the Interior (DOI) approved a conditional use permit for Shell’s risky proposal in May of 2015, although Shell still has to clear several other permit hurdles before they can move full steam ahead with their plan. Seigl continued in her written statement on Greenpeace:

Shell places itself in opposition to all land defenders by pushing through with their Arctic Drilling plans. Shell places itself in opposition to the First Nations who have said “No” to Arctic Drilling. I stand with thousands of years of ancestors to say “No More!” I stand with indigenous women from around the world to say “No More!” Shell has reportedly splurged a whopping seven billion dollars to date on its exploratory lust to adventure into the deep waters of the North — forcing its way ahead at any expense, amidst a hail of resounding opposition — resistance that came to a head when the humongous rig docked on the west coast earlier this year.

In May Polar Pioneer pulled into Seattle and hundreds of “kayactivists” in brightly colored kayaks met the rig off the harbor in Seattle, in a boat-blockade that ignited the #sHellNo campaign. The mayor, councilmen and other prominent city figures joined hands in vocal fashion with the #sHellNo campaign, detesting the company’s efforts in the media, and pledging to help local activists, and stand in the way however possible. At one point, King County even told Shell that it was not welcome to dump its human excrement there.

Most recently, just three days back when Polar Pioneer left Seattle, kayactivists struck again with another effort to stop the rig from leaving the port and continuing its journey north to the choppy waters of Alaska. Several arrests were made in that demonstration reports local Q13 Fox.

Other noteworthy Greenpeace activists were already putting their bodies on the line in opposition of Polar Pioneer earlier this year. On April 6, 2015, they actually scaled the massive football-field-high drill rig 750 miles northwest of Hawaii.

According to statements made by Greenpeace Canada, it sounds that they will continue to stock, impede, protest, and even board, Shell’s massive Polar Pioneer at every available juncture along its journey to the Alaskan Arctic. We for one, intend to watch this space closely.