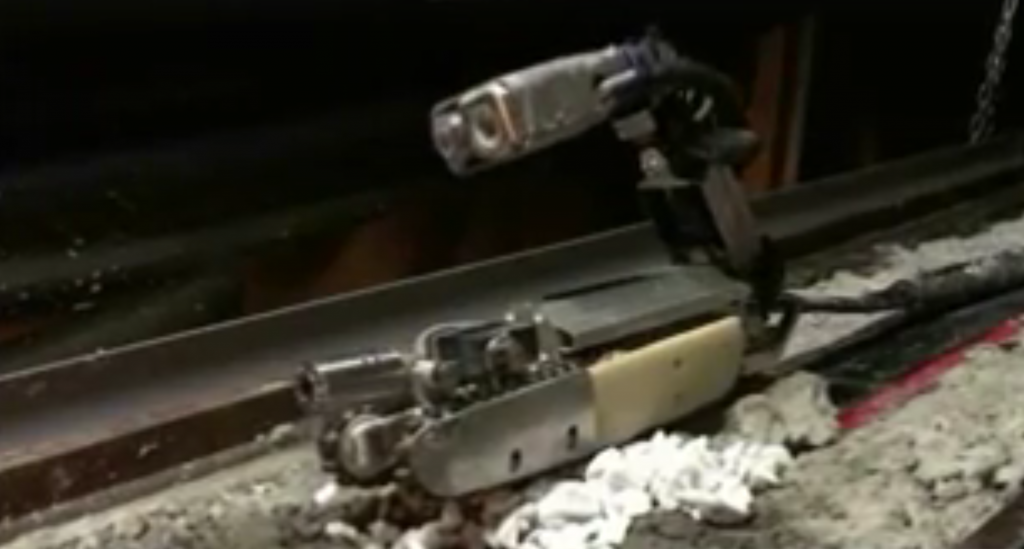 (EnviroNews World News) — Fukushima Prefecture, Japan — Dismantling the crumpled reactors and recovering the melted fuel at the crippled Fukushima Daiichi power plant in eastern Japan now relies on technology that hasn’t even been invented yet, as Tokyo Electric Power Company (TEPCO) flies blindly into an abyss of challenges, unprecedented in the history of nuclear power.

That is the logical deduction reached by EnviroNews World News as well as several prominent nuclear experts, after a robot, specially designed to handle astronomical amounts of radiation, failed in a few short hours after being sent into the facility’s Reactor 2 containment vessel on Thursday, February 16, 2017. TEPCO said it isn’t yet sure whether the device pooped out due to radiation or one of it’s tank-like tracks getting stuck while it crawled over highly radioactive rubble.

“Even though the robot could not reach the pedestal area, which we had initially planned to investigate, valuable information was obtained which will help us determine the methods to eventually remove fuel debris,” TEPCO said in a statement on its Facebook page. “The robot was left inside the PCV (primary containment vessel) [as] not to obstruct further investigations.”

The remote-controlled “scorpion” robot, built by Toshiba and the International Research Institute for Nuclear Decommissioning, was sent into the reactor in an attempt to locate the melted fuel core — and more specifically, to investigate a “black blob” TEPCO believes may be melted fuel near the pedestal below Reactor 2’s pressure vessel. According to Reuters, the droid represents the seventh such device, fried in the jaws of Fukushima’s highly radioactive reactors.

Despite the setbacks, and the colossal radiation readings, TEPCO is sticking to its guns as per its projected timeline for pulling out the melted fuel — a feat the company says will begin in 2021. To be clear, TEPCO has yet to definitively locate even a fragment from any of the three fuel cores it says it will remove.

But many experts, like esteemed whistleblower, engineer, and former reactor operator Arnie Gundersen, say TEPCO is either fooling itself, or intentionally fooling the public, as radiation levels inside the reactor buildings are way beyond what humans, and even robots for the matter, can withstand.

TEPCO might be sticking to its guns, but Gundersen, who was CNN’s on-air expert during the 3/11/11 meltdowns, is sticking to his as well, and remains adamant that TEPCO is badly off-course with its cleanup strategy.

EnviroNews World News asked Gundersen flat out if TEPCO was “living in a dreamworld?” Gundersen replied, “Not a dreamworld; a scheme-world,” and elaborated saying the company, and the Japanese government, are staying with their story of a quick cleanup for all the wrong reasons.

“The reason TEPCO wants to dismantle Fukushima has nothing to do with science and everything to do with politics,” Gundersen told EnviroNews in an email. “By claiming Fukushima can be dismantled in 30 years, TEPCO can convince the Japanese people that other nukes in Japan are safe to restart. If the Japanese knew that 100 years were necessary, they would not approve restarting the remaining nukes. Follow the money!”

The brunt of the radioactive rays making the situation so lethal inside the reactors emanate from intense beta-decay occurring in the isotope cesium as it transforms into barium. Cesium 137 has a half-life of 30 years, meaning in 90 years, it’s radioactivity will be reduced to one-eighth of what it is now. Many other isotopes are present as well, like plutonium 239 which has a 24,100-year half-life, but since plutonium is primarily an alpha-emitter, it is usually only lethal if ingested or inhaled. For this reason, Gundersen and his non-profit educational organization Fairewinds, say the reactors should be pumped full of concrete and shelved until the radioactivity falls to more manageable levels.

Gundersen, and Fairewinds, have repeatedly reiterated this strategy since the onset, and have recommended that all three melted reactors be entombed in sarcophaguses, similar to what was done in the 1986 meltdown at Chernobyl in Ukraine, for at least 100 years. This, Gundersen says, would allow the now monumental radioactive intensity to decay substantially, so that humans and robots could work in closer proximity to it.

Earlier this month, TEPCO sent another droid into the Reactor 2 pressure vessel — and the information that video-bot returned shocked people around the world: an estimated radiation level of 530 sieverts per hour — or enough to kill a human with only seconds of exposure. And that’s not the worst of it.

Those robotically captured readings were taken inside the pressure vessel. It is now clear the reactor core, at least in unit 2, melted through the pressure vessel, and down into the containment vessel — if not beyond. In other words, the robot, which collapsed under the extreme radioactivity in about two hours, was nowhere near the actual fuel cores themselves — a place where radiation is sure to be even higher. TEPCO has said it estimates levels could reach “several thousand sieverts per hour” in areas closer to the missing cores.

Levels that high would destroy the most advanced radiation-resistant robots in as little as ten minutes; not a promising fact consdiering there is approximately 600 tons of melted fuel that needs to be removed. The recent radiation revelations, coupled with the death of TEPCO’s multiple robots, has led the company to admit it will need to develop new technology to attack the quandary. Numerous leading experts, including the head of the U.S. Nuclear Regulatory Commission (NRC), have stated they doubt the melted fuel can ever be recovered, as such a mission has never been accomplished before.

“It may be possible that we’re never able to remove the fuel. You may just have to wind up leaving it there and somehow entomb it as it is,” said Gregory Jaczko, former Chair of the NRC, to Australia Broadcasting Corporation‘s (ABC) Foreign Correspondent.

Of further concern is the fact TEPCO has yet to get a handle on the problem of groundwater seeping into the reactor buildings, picking up large amounts of radioactivity, then flowing out to sea — and this has been a continuous environmental nightmare since the accident’s inception — a bad dream with no end in sight.

“First TEPCO must stop water from leaking in; turn off the spigot on the overflowing tub. Then they should fill the containment with concrete and walk away for 100 years,” Gundersen concluded.

TEPCO says it will do its best to explore the inside of Reactor 1 next month. Many fear the situation may even be worse inside Reactors 1 and 3 than it is in number 2.

(EnviroNews World News) – Fukushima Prefecture, Japan – On February 2, 2017, radiation levels in the Reactor 2 vessel at the crippled Fukushima Daiichi No. 1 power plant in eastern Japan, were measured at the highest levels since the triple reactor core meltdowns on March 11, 2011, The…

No ‘Safe’ Level Period: How The Media Got It Dangerously Wrong on Fukushima Radiation Hitting The West Coast