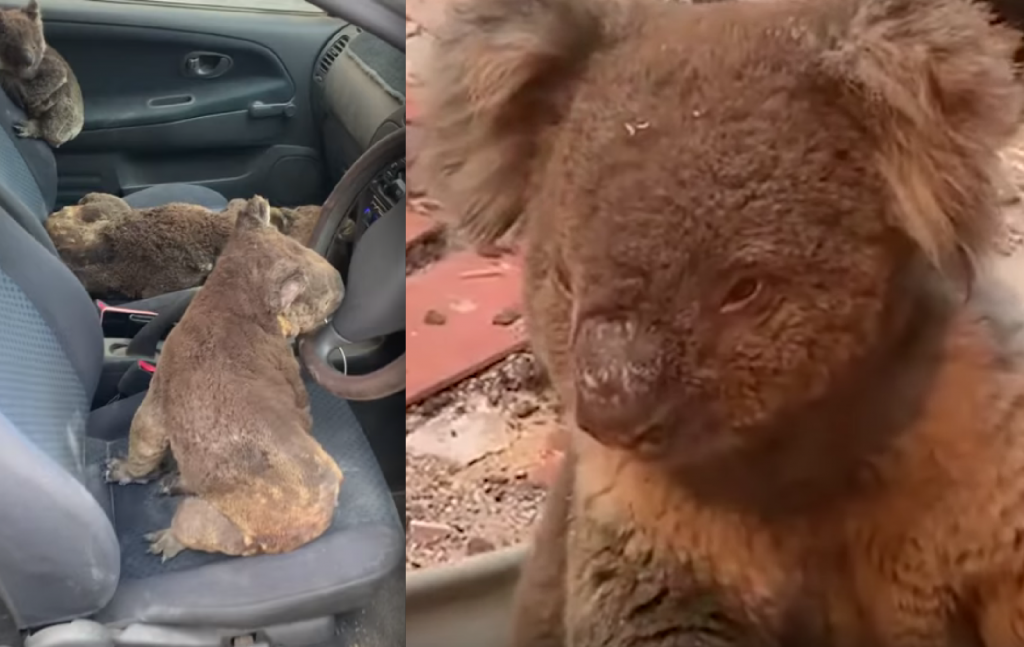 (EnviroNews World News) — Kangaroo Island, Australia — “We’re just trying to collect as many live ones as we can. This is our little koala rescue,” said one teenage boy from off-camera in a video that is now going viral across the Internet. Published on Alternative 666, the clip has surpassed 950,000 views and shows the efforts of Micah Lovegrove (19) and his comrade Caleb (18), who drove around Kangaroo Island rescuing Koalas (Phascolarctos cinereus) in desperate need of help, after Australia’s historic wildfires demolished their habitat, leaving the beloved, slow-moving creatures charred and homeless.

In their heroic quest, the teens left alone animals that seemed to be doing okay and said about 60 percent of the koalas they found were already dead. According to The Sun, four of the 20 animals they rescued died within a day due to fire-related injuries. The boys say they plan to continue helping the surviving animals, which they have taken to a friend who has a license to care for them.

In the video, Micah and Caleb are seen racing around with several imperiled koalas in the car, including a mama and her joey, which led some social media commenters to express concern that the teens might take the animals off the island, which due to mainland disease could be disastrous for the fuzzy critters. Fortunately, the rescuers announced they were locals and would be doing no such thing.

The Sun posted an expanded video of the event, which has over 3 million views, showing one of the koalas sitting stunned amidst smoldering debris as the youths draped a blanket over it and picked it up to put it in the car. Other koalas have been removed from the island by well-meaning but uninformed people, which prompted Department of Environment bushfire recovery coordinator Brenton Grear to issue a press release about the problem with taking them from the island.

“It’s understandable and heartening that people want to rescue these animals, but unfortunately it will mean that those koalas can’t be returned to the island because of the risk of contamination of the population there,” Grear said. 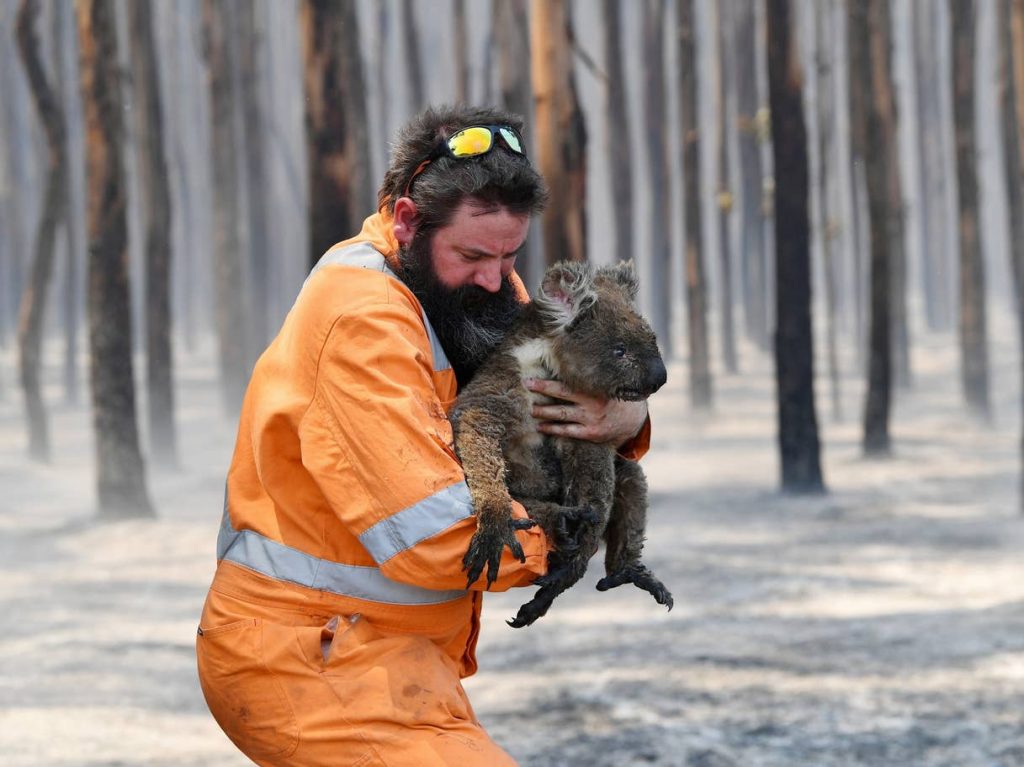 As inspiring as it may be, it’s not only these teens that are taking matters into their own hands in an effort to aid the helpless creatures. Cinematographer Bill Blair is another koala rescuer. His post on Instagram tells the story. While on the island to film the fire devastation, he came across a joey sitting with its dead mother. He took the baby koala to a “koala hospital on the island” and was told the little guy would be okay and just needed to be treated for burned feet.

That time you are working on Kangaroo Island filming the fire devastation and you come across the cutest baby bear ever huddled next to his burnt mummy. I picked it up and put it in the car with me and drove to the set up koala hospital on the island. Some 30 mins later and many lap sits in the car, we got there and they said he will fine after treatment for burnt feet…. Saving 1 helps…… so many animals have been lost in Australia from these fires….. not this little drop bear #australia #visitaustralia #koala #southaustralia #kangarooisland #dropbears #instragram #travel #picoftheday #instadrone #dronestagram #ilovesydney #visitsouthaustralia #wildlife #koalabears #shotoniphone #chrishemsworth #liamhemsworth

The Humane Society International (HSI) photographed a koala appearing to grieve over a dead friend as seen in The Independent. The photo taken during the organization’s search efforts is indicative of what rescuers are seeing on the ground according to HSI Disaster Response Chief Kelly Donithan. 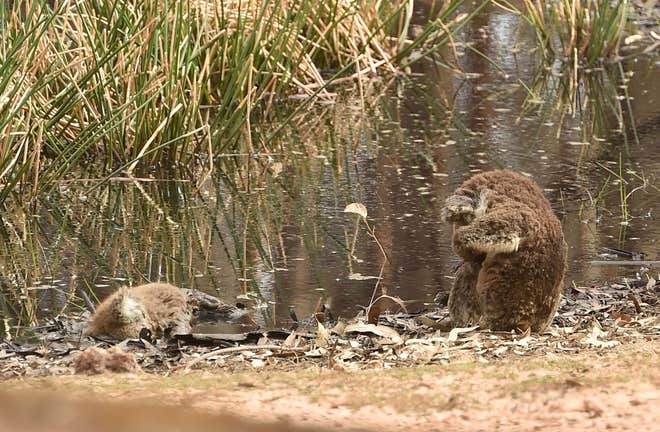 Koala Grieving for a Fallen Friend in the Australia Wildfires — Photo: AFP via Getty Images

“The survivors have little to no energy reserves left and we are finding them sitting on the ground totally shut down – all too often with other corpses nearby,” Doithan told The Independent. The surviving koala in the photo was taken to the Kangaroo Island Wildlife Park.

In a Tweet, Evan Quartermain, Head of Programs at the Humane Society International Australia, described the scene on the ground this way:

Have been on Kangaroo Island for two days but it feels like a month. Nothing could have prepared me for this. We’re non-stop in the field searching for wildlife survivors in apocalyptic landscapes. Air is thick with ash and death, but I wouldn’t be anywhere else.

Have been on Kangaroo Island for two days but it feels like a month. Nothing could have prepared me for this. We're non-stop in the field searching for wildlife survivors in apocalyptic landscapes. Air is thick with ash and death, but I wouldn't be anywhere else #AustralianFires pic.twitter.com/hHyvyVwJ3x

After fire rips through an area, HSI is finding koalas on the ground, malnourished, dehydrated, and joeys without parents. Koalas found still in trees with some remaining green growth are left there and checked on periodically. HSI has set up water stations and is taking the injured to the Kangaroo Island Wildlife Park.

The staggering estimate of animals killed by the wildfires in Australia has risen from 500 million to 1 billion. Koalas aren’t the only ones affected though. With about one-third of Kangaroo Island burned and the fires concentrated in its most bio-diverse area, The Guardian reported that the biggest concerns are for the Kangaroo Island dunnart (Sminthopsis aitkeni), the green carpenter bee (Xylocopa aeratus), and the glossy black cockatoo (Calyptorhynchus lathami halmaturinus), which are extinct on mainland Australia. 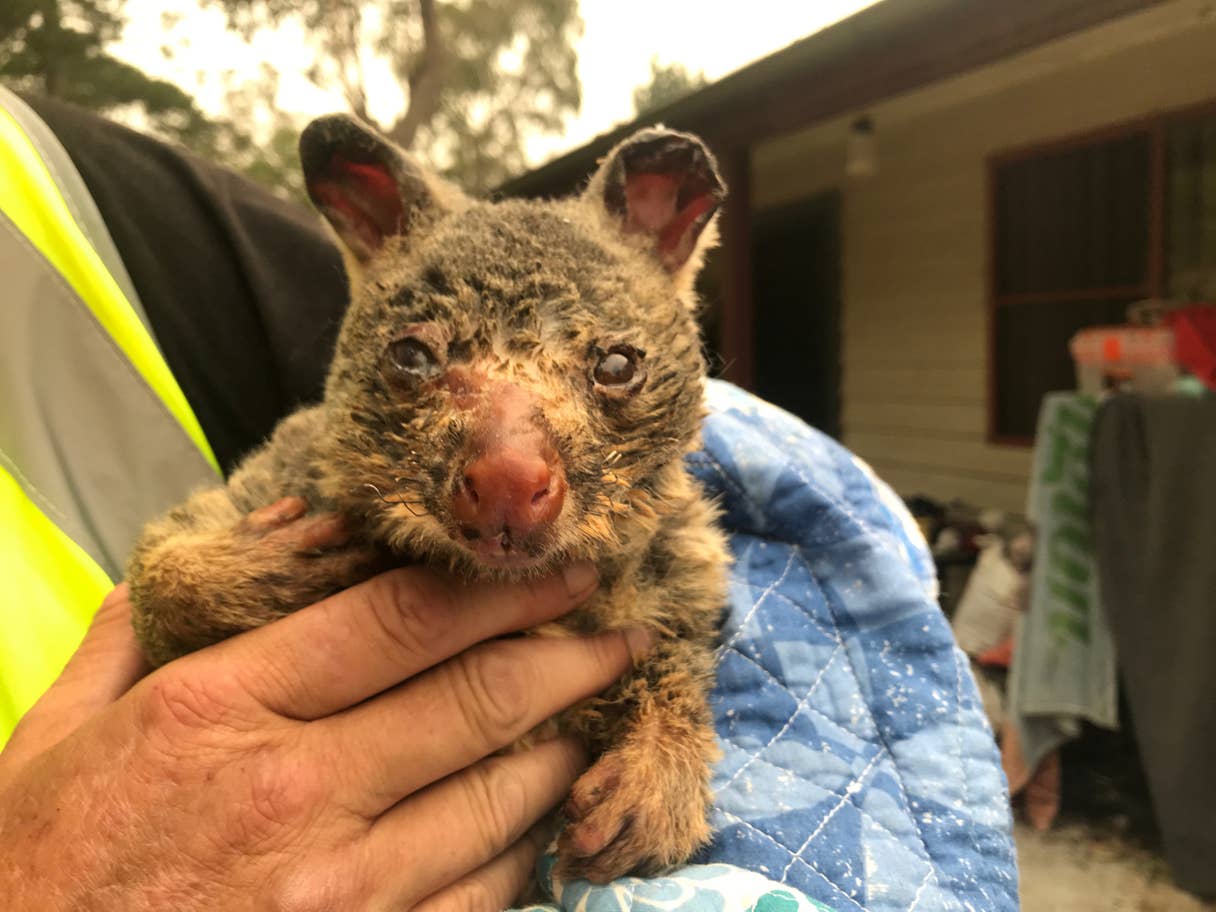 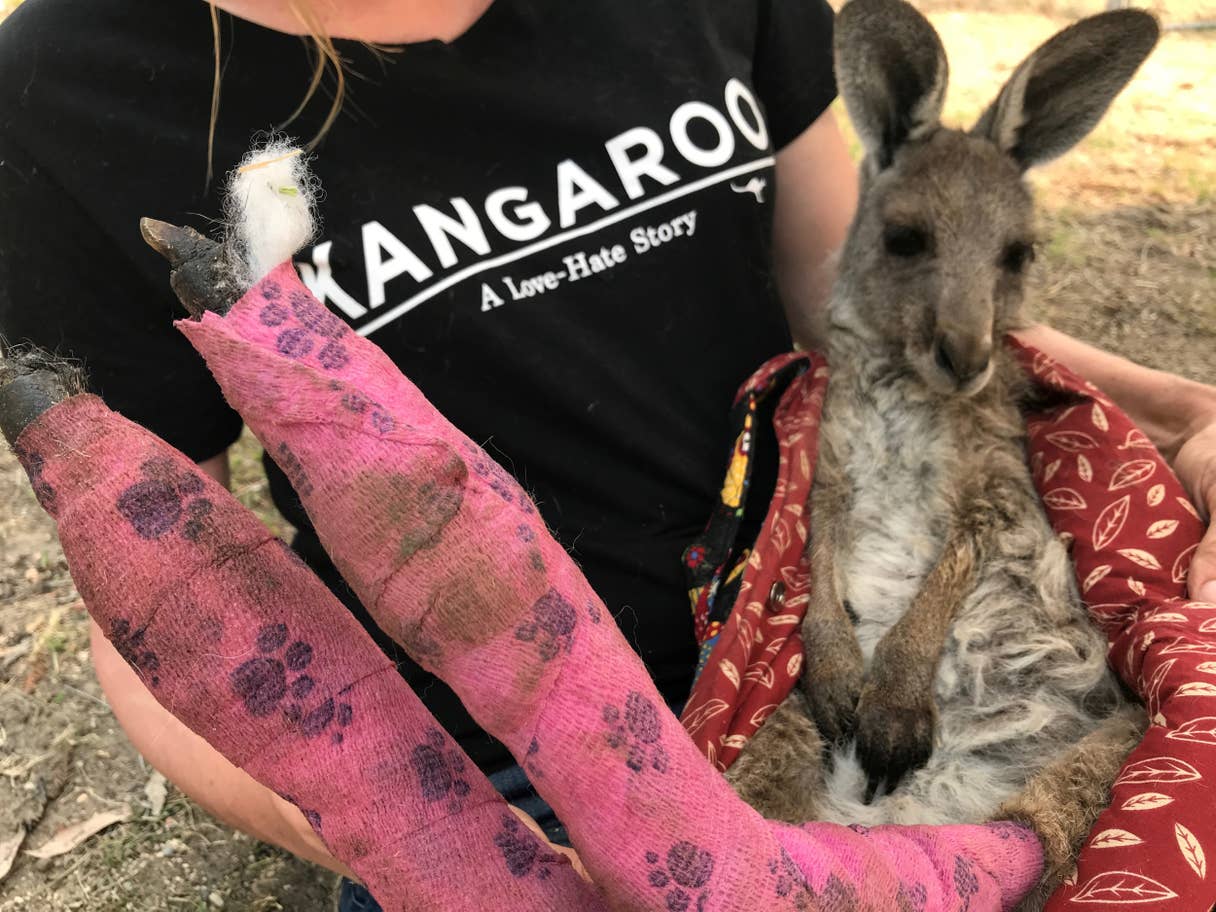 With as few as 400 of the distinct Kangaroo Island population of glossy black cockatoos remaining in the wild, the fires couldn’t have come at a worse time – the middle of breeding season. Dr. Gabriel Crowley, of the Centre of Biodiversity and Conservation Science at the University of Queensland, has worked on conservation efforts for this cockatoo for 22 years, and notes that many of the breeding females would have been sitting on eggs and reluctant to move. 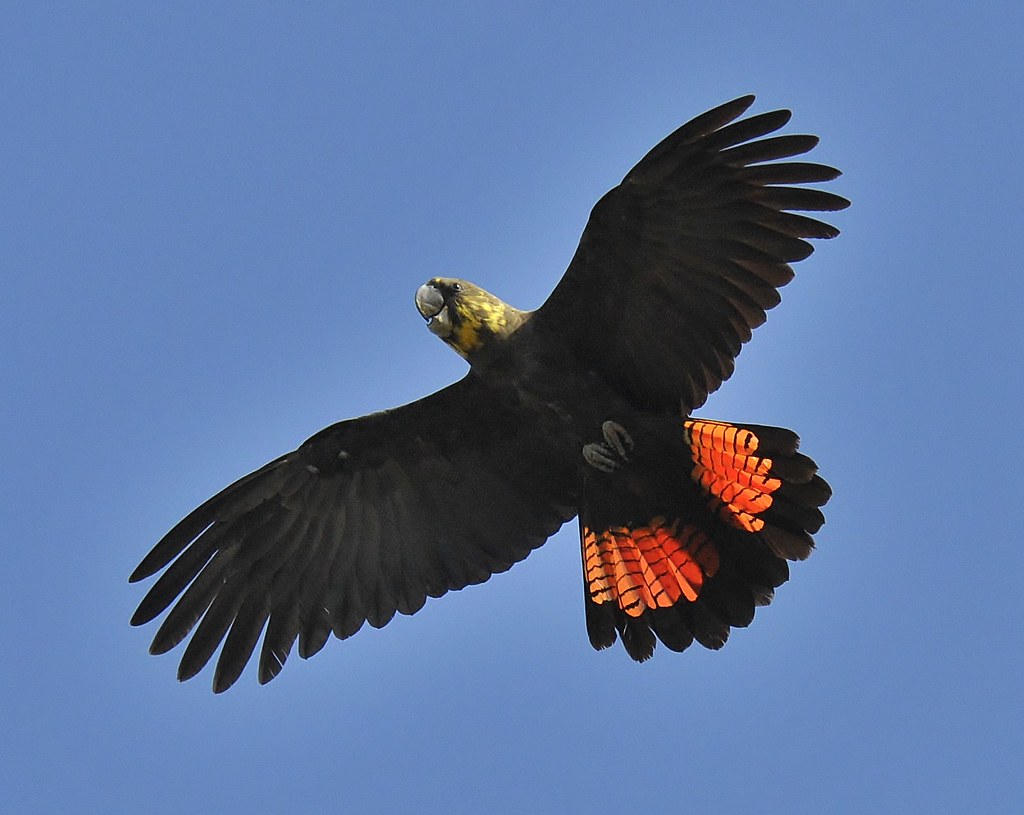 “They have few places to nest and have lost their food supply. Their survival will depend on an intensive recovery effort,” Crowley told The Guardian. While a flock of cockatoos may have flown to safety, the birds will still have to face the specter of starvation as their primary, specialized food source, the seeds of the drooping sheoak (Allocasuarina verticillate), has been burned to ash.

The Kangaroo Island wildfire started as the result of two lightning strikes. Steve, cousin to one of the teens and the one responsible for posting the viral video to Reddit, told Bored Panda that some are blaming the devastation on the Government for stopping the practice of back-burning.

“The entire situation seems to have been preventable to a large degree,” Steve said. “Recent changes by the Government are perceived by many as being the culprit on what [have] been the worst fires for a long time. Previously, it was common practice to ‘back burn’ so as to mitigate the risks of fire, but that practice was halted and as such provided the fires with more burning material and made it easier to spread,” he concluded.

As of Jan. 7, about 50 koalas have been brought to the Kangaroo Island Wildlife Park so far, where Director Sam Mitchell told The Guardian one-third of them have needed to be euthanized. The park has also received pygmy possums, kangaroos, and wallabies and has set up a larger area to accommodate the influx of injured animals. Two men, a father and son, have been killed in the fire.

Kangaroo Island harbored between 50,000 and 60,000 koalas before the fire. They were brought over in 1920, and the animals are one of Australia’s only chlamydia-free populations. Mitchell estimated that half the population has been killed in the fire but admitted that was only a guess on his part. The park’s GoFundMe page has raised over $2.1 million in light of recent events. It was established on Jan. 3, 2020 with a goal of $15,000.