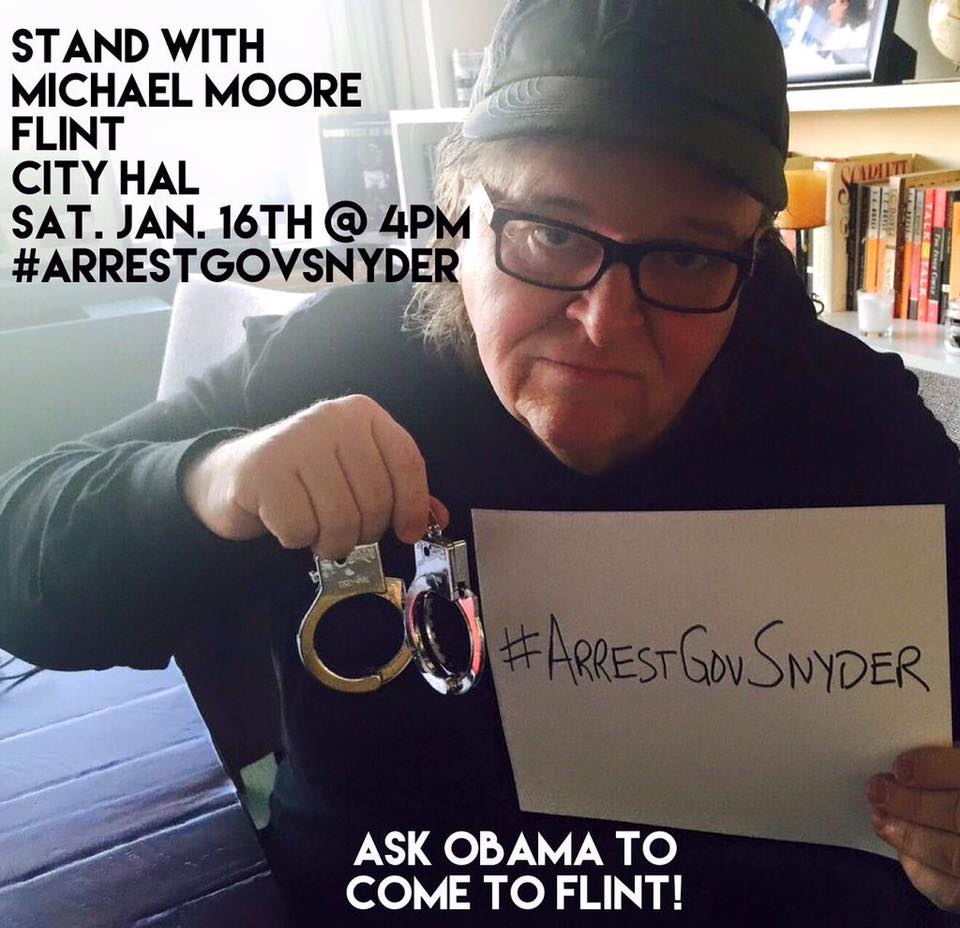 Moore’s petition calls for the arrest and prosecution of Michigan Governor Rick Snyder (R) over the ever-mushrooming Flint water crisis — a scandal that has consumed international headlines of late, and rocked an already financially hobbled town of nearly 100,000.

As of Sunday evening at 8:00 p.m. EST, the petition has accrued nearly 118,000 signatures — and that number has been rising rapidly over the past several hours.

The petition itself is carried within a letter to President Obama, wherein Moore implores the President and Attorney General Loretta Lynch to investigate the scandal surrounding Governor Snyder in regards to the city’s lead-poisoning debacle. The filmmaker writes unto the President:

And, as if things couldn’t get any worse, the news of 87 people with Legionnaires Disease happened this week. Ten Flint residents have been KILLED by this disease which is caused by tainted water. Not by gun violence, not in Afghanistan, but by an act of racism and violence perpetrated by the — I’m sorry to say — white, Republican governor of Michigan who knew months ago the water was toxic.

Locals and citizens around the world have been outraged at the Governor — not only because the lead poisoning nightmare occurred on direct orders from one of his appointed emergency managers, but because evidence reveals the Governor knew of the problem with Flint’s water months ago, and instead of declaring a state of emergency, chose instead to placate the masses and recommend residents continue using the toxic water.

Moore also appeals to the President to visit Flint personally and address the crisis, saying that if he fails to do so, it would be the equivelency of Bush flying over Katrina. The filmmaker writes:

This week, you are coming to Michigan to attend the Detroit Auto Show. We implore you to come to Flint, less than an hour’s drive north of Detroit. Do not ignore this tragedy taking place every day. This may be Gov. Snyder’s Katrina, but it will become your Bush-Flying-Over-New Orleans Moment if you come to Michigan and then just fly away. I know you don’t want that image of flying over us as you “fake-sad” look down on Flint just as Bush did in that never-to-be-forgotten photo-op over New Orleans. I know you are going to come to the rescue here in Flint. I can’t imagine any other scenario.

Many are saying Snyder’s actions wreak of criminal negligence, and federal and state probes have already been launched into the crisis. Still, thousands have called not only for the impeachment of the Governor, but for his immediate arrest. Michael Moore is in that boat and obviously shares a similar mindset — and he’s set out to do something about it with his petition.

You can read Moore’s full letter to the president, and visit the petition at this link: https://michaelmoore.com/ObamaComeToFlint

You can read the contents of the petition portion of Moore’s webpage just below:

We, the undersigned, call upon you to investigate and, if warranted, arrest and prosecute the Governor of Michigan, Rick Snyder, for violating the Environmental Protection Agency’s regulations in cutting off clean drinking water to the city of Flint and making the citizens, instead, drink polluted water from the Flint River; for fraud and political corruption; and for covering up the criminal actions of his administration. The children of Flint, already amongst the poorest in the U.S., will now have to endure a life of pain, irreversible brain damage and lower IQ’s because of Governor Snyder’s actions. There is no way to totally reverse the effects of lead in a child’s blood stream. At the very least, justice must be served — and other elected officials must be put on notice, by the actions you will take against the Governor, that people’s lives are more important than balancing a budget.

We ask that you, President Obama, come to Flint and see first-hand the tragedy that has taken place — and then send in the CDC, the EPA, FEMA and the Army Corps of Engineers to repair the damage the Governor of Michigan has done to Flint.

MORE ON THE FLINT WATER CRISIS FROM ENVIRONEWS WORLD NEWS