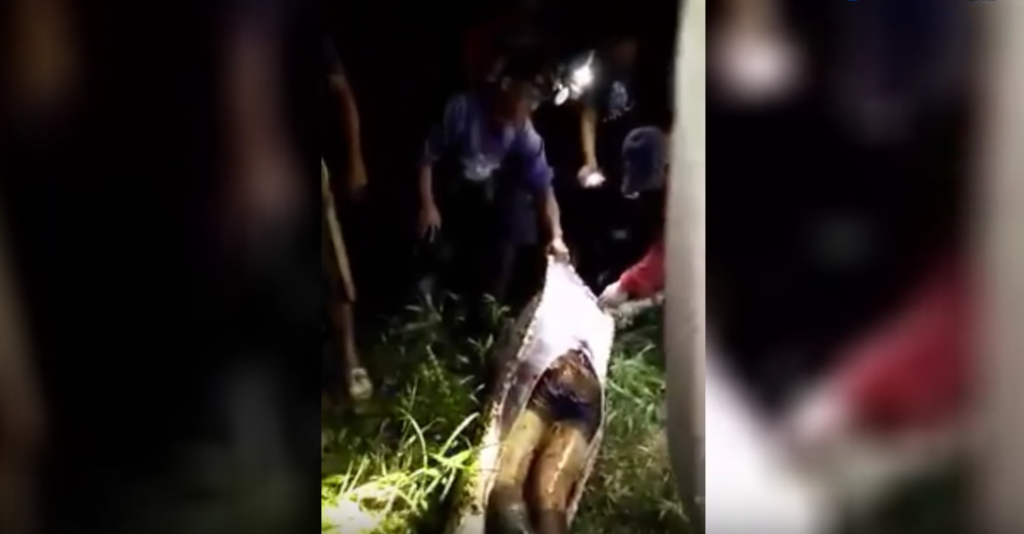 (EnviroNews World News) — Salubiro Village, Indonesia — On March 29, 2017, in a rural village in Indonesia, a ghastly scene unfolded for all to see and has been captured on video. Friends of a missing farmer sliced open a 23-foot long reticulated python (Python reticulatus) and were horrified to find his body inside. The 25-year old man, known as Akbar where local villagers use only one name, was reported missing on March 26, three days before he was found.

A graphic video showing the recovery of the victims’s body from the python was posted on YouTube. Junaedi, a Salubiro village official, told CBS News, “When its stomach was cut, we first saw his boot and legs near the neck. It seems he was attacked from behind because we found a wound on his back.”

Sadly, Akbar’s wife was away at the time and learned of her husband’s fate only when the video was shown in local news reports.

The villager was likely dead before he was swallowed. Recent studies have shown that pythons, like boa constrictors, kill by stopping their prey’s blood flow. As the snakes coil tightly around their victims, the heart stops and death follows quickly. Large pythons have been known to swallow crocodiles, hyenas and other big prey. Both boas and pythons are non-venomous snakes.

This isn’t the first time a human has met their demise in the coils of a python though. Several previous incidents of the snakes killing humans have been recorded in Indonesia and elsewhere. In 1995, a Malaysian man in the process of being swallowed by a python was found by his brother. In 2008, a Virginia Beach woman was killed by her pet reticulated python.

Pythons are ambush killers. Akbar worked on a palm oil plantation — operations which have often been blamed for destruction of natural rainforest ecosystems. Some conservationists believe that such habitat loss forces wildlife into greater conflict with humans. A 2013 report by Eyes on the Forest found that a series of tiger attacks in Sumatra were associated with habitat clearing. In the Riau Province, 60 percent of these incidents, which resulted in 27 deaths, occurred where forests had been hacked away.

Rahmansyah, a lecturer at Hasanuddin University in Makassar, told the Jakarta Post, “Because the habitat is destroyed, the snake’s natural food sources are also affected. Thus, the snake went out to the palm oil plantation to seek prey.”

The Union of Concerned Scientists (UCS) has labeled palm oil “one of the world’s leading deforestation drivers.” It’s found in everything from lipstick to margarine, ice cream, shampoo and pizza dough. UCS attributes palm cultivation to between two and nine percent of worldwide carbon emissions from tropical land use.

According to the Schuster Institute for Investigative Journalism at Brandeis University, 3.7 million people in Indonesia are employed by the palm oil industry.