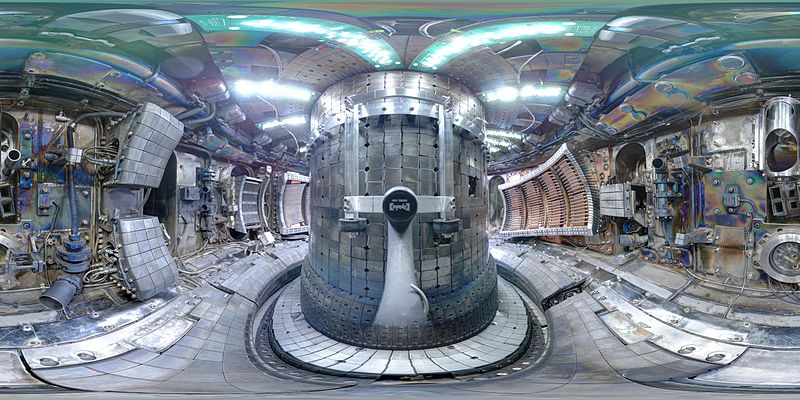 (EnviroNews World News) — Princeton, New Jersey — Researchers at the Princeton Plasma Physics Laboratory (PPPL), an arm of the U.S. Department of Energy (DOE), reported a breakthrough in fusion energy science on June 1, 2015, with the simulation of “plasmoids” in a tokamak-like environment.

It was also reported by PPPL that the breakthrough could significantly simplify the design of the tokamak.

A tokamak is a Russian-born, torus-shaped, magnetic confinement fusion device that creates and contains plasma equilibrium in a magnetic field wherein deuterium and tritium particles are introduced into heated plasma that must be maintained at a temperature over 100,000,000 degrees Celsius to produce fusion power.

The documentary by Russia Today just below provides an excellent description and graphics of the tokamak.

According to the PPPL release, “This marked the first time researchers had modeled plasmoids in conditions that closely mimicked those within an actual tokamak.”

Fatima Ebrahimi, the paper’s lead author and a physicist at Princeton and PPPL said, “Understanding this behavior will help us produce plasmas that undergo fusion reactions indefinitely.” — a promising prospect if the 60-year-old design is to become commercially viable for energy production at any point in the future.

The release highlighting the potential breakthrough from PPPL is below:

Researchers at the U.S. Department of Energy’s Princeton Plasma Physics Laboratory (PPPL) have for the first time simulated the formation of structures called “plasmoids” during Coaxial Helicity Injection (CHI), a process that could simplify the design of fusion facilities known as tokamaks. The findings, reported in the journal Physical Review Letters, involve the formation of plasmoids in the hot, charged plasma gas that fuels fusion reactions. These round structures carry current that could eliminate the need for solenoids – large magnetic coils that wind down the center of today’s tokamaks – to initiate the plasma and complete the magnetic field that confines the hot gas.

“Understanding this behavior will help us produce plasmas that undergo fusion reactions indefinitely,” said Fatima Ebrahimi, a physicist at both Princeton University and PPPL, and the paper’s lead author.

Ebrahimi ran a computer simulation that modeled the behavior of plasma and the formation of plasmoids in three dimensions thoughout a tokamak’s vacuum vessel. This marked the first time researchers had modeled plasmoids in conditions that closely mimicked those within an actual tokamak. All previous simulations had modeled only a thin slice of the plasma – a simplified picture that could fail to capture the full range of plasma behavior.

Researchers validated their model by comparing it with fast-camera images of plasma behavior inside the National Spherical Torus Experiment (NSTX), PPPL’s major fusion facility. These images also showed plasmoid-like structures, confirming the simulation and giving the research breakthrough significance, since it revealed the existence of plasmoids in an environment in which they had never been seen before. “These findings are in a whole different league from previous ones,” said Roger Raman, leader for the Coaxial Helicity Injection Research program on NSTX and a coauthor of the paper.

The findings may provide theoretical support for the design of a new kind of tokamak with no need for a large solenoid to complete the magnetic field. Solenoids create magnetic fields when electric current courses through them in relatively short pulses. Today’s conventional tokamaks, which are shaped like a donut, and spherical tokamaks, which are shaped like a cored apple, both employ solenoids. But future tokamaks will need to operate in a constant or steady state for weeks or months at a time. Moreover, the space in which the solenoid fits – the hole in the middle of the doughnut-shaped tokamak – is relatively small and limits the size and strength of the solenoid.

A clear understanding of plasmoid formation could thus lead to a more efficient method of creating and maintaining a plasma through transient Coaxial Helicity Injection. This method, originally developed at the University of Washington, could dispense with a solenoid entirely and would work like this:

1. Researchers first inject open magnetic field lines into the vessel from the bottom of the vacuum chamber. As researchers drive electric current along those magnetic lines, the lines snap closed and form the plasmoids, much like soap bubbles being blown out of a sheet of soapy film.

2. The many plasmoids would then merge to form one giant plasmoid that could fill the vacuum chamber.

3. The magnetic field within this giant plasmoid would induce a current in the plasma to keep the gas tightly in place. “In principle, CHI could fundamentally change how tokamaks are built in the future,” says Raman.

Understanding how the magnetic lines in plasmoids snap closed could also help solar physicists decode the workings of the sun. Huge magnetic lines regularly loop off the surface of the star, bringing the sun’s hot plasma with them. These lines sometimes snap together to form a plasmoid-like mass that can interfere with communications satellites when it collides with the magnetic field that surrounds the Earth.

While Ebrahimi’s findings are promising, she stresses that much more is to come. PPPL’s National Spherical Torus Experiment-Upgrade (NSTX-U) will provide a more powerful platform for studying plasmoids when it begins operating this year, making Ebrahimi’s research “only the beginning of even more exciting work that will be done on PPPL equipment,” she said.

For more on the recent plasmoid discovery at PPPL visit their website at: https://www.pppl.gov/