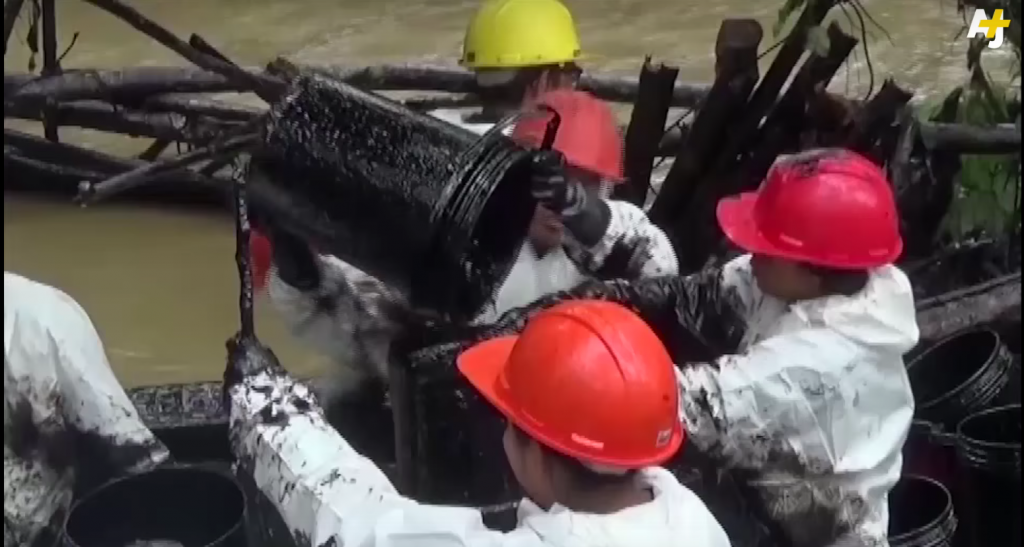 (EnviroNews World News) — Nazareth, Peru — Two large oil pipeline spills have been reported in Peru near the boarder of Ecuador since late January of 2016. Viscous black crude has made its way into the headwaters of the mighty Amazon River, and more threatens to do so if state-run energy company PetroPeru fails to get a handle on the situation.

The first spill happened January 25, after a landslide compromised a 40-year-old pipeline. The second occurred on February 3, and its cause is still under investigation. It is not know at this time exactly how much oil has been spilled, but it is surmised that at least 3,000 barrels were let loose, of which some has made its way into the River Chiriaco before entering the River Maranon — one of the largest tributaries of the Amazon River in Peru.


The atmosphere has been tense over the past month between officials and the indigenous villagers inhabiting the nearby forest. Clashes came to a dramatic head on March 6, when local tribesmen captured at least eight hostages from a grounded helicopter, including crew members, a PetroPeru official, and government workers from the Ministry of Energy and Mines as well as OEFA, Peru’s environmental regulatory body. After a few days, on March 10, those hostages were released reportedly unharmed, but outrage amongst villagers continues to fester as PetroPeru flounders in an attempt to get the dire state of affairs under control.

The hostages were taken as an act of protest to demand action on the unfurling oil spill — an accident that’s been wreaking havoc on the indigent community. The captives were finally turned loose after PetroPeru agreed to provide emergency services including electrical and phone.

Even more disturbing in this story though, is that on March 14, 2016, BBC World News reported in an exclusive, that PetroPeru has been deploying impoverished indigenous children to aid in hands-on recovery and cleanup operations, in what has clearly become a hazardous situation on the ground.


PetroPeru has denied the allegations, saying that it prohibits kids from working in such cleanup efforts, but interviews conducted with the child laborers and their families told a different story.

“With just our bare hands, like this,” 14-year-old Naith told BBC, asserting she and her two younger brothers were made to scoop the oil into buckets with their hands, without so much as even gloves for protection — this, while PetroPeru employees wear white hazmat suits and respirator masks.


BBC Rio de Janeiro correspondent Wyre Davies reports the children “were paid about a dollar [per bucket] by company officials.”

A man named Jaime, the father of the aforementioned family told BBC he had stopped the youths at one point, but found that most of the village’s children had also been cleaning up oil for PetroPeru.

“They fell ill with fever and diarrhea after being sent to the river,” he told BBC. One of his sons, seven-year-old Osman, has been hospitalized following the episode, and he showed his children’s oil-stained clothing to reporters as proof.


On the other hand, PetroPeru has been propagating a carbon-copy repeat of the same old damage controlling lingo heard in nearly every oil spill around the world for decades. Victor Palomino, the point-man in charge of the cleanup, assured the media the operation is going great, while adding that this type of accident is unavoidable.

“Yes, of course there will be accidents, that’s inevitable,” Palomino told the BBC. “But our biggest concern here is to restore the environment to how it was before and to minimize the risk to local communities,” he continued.

If “restoring the environment” and “minimizing the risk to local communities” means deploying children to clean up highly toxic, carcinogenic and mutagenic crude oil and chemicals with their bare hands for pennies, few would argue that PetroPeru needs to re-examine its cleanup strategy.

Still, Palomino might be right when he says these accidents are “inevitable” — especially when dealing with 40-year-old rickety pipelines like the one that ruptured here. Just like a 40-year-old car driving down the road, they’re going to break down — and often when you least expect it — it’s only a matter of time.

A state of emergency has been declared on the ground by the Peruvian government, which in this case means no fishing or drinking from nearby waterways for a period of four months. The community in Nazareth is inseparably tied to the fish, creatures and greater ecosystem of the river for its survival. Four months without being able to use and rely on it could mean a death sentence for villagers here, but then again, so could drinking the now-tainted water. People around the world are looking on in hopes that the Peruvian government and NGOs will render greater aid to this poor reeling community, before the damage becomes worse than it already is.

MORE ON OIL SPILLS FROM ENVIRONEWS

(EnviroNews DC News Bureau) – In our extended coverage with this enigmatic and lifelong oilman and “downhole” expert, we explore the topic of quart by quart oil spills into the environment. The fossil fuel CEO, who in his own words said he wanted to “take the opportunity…