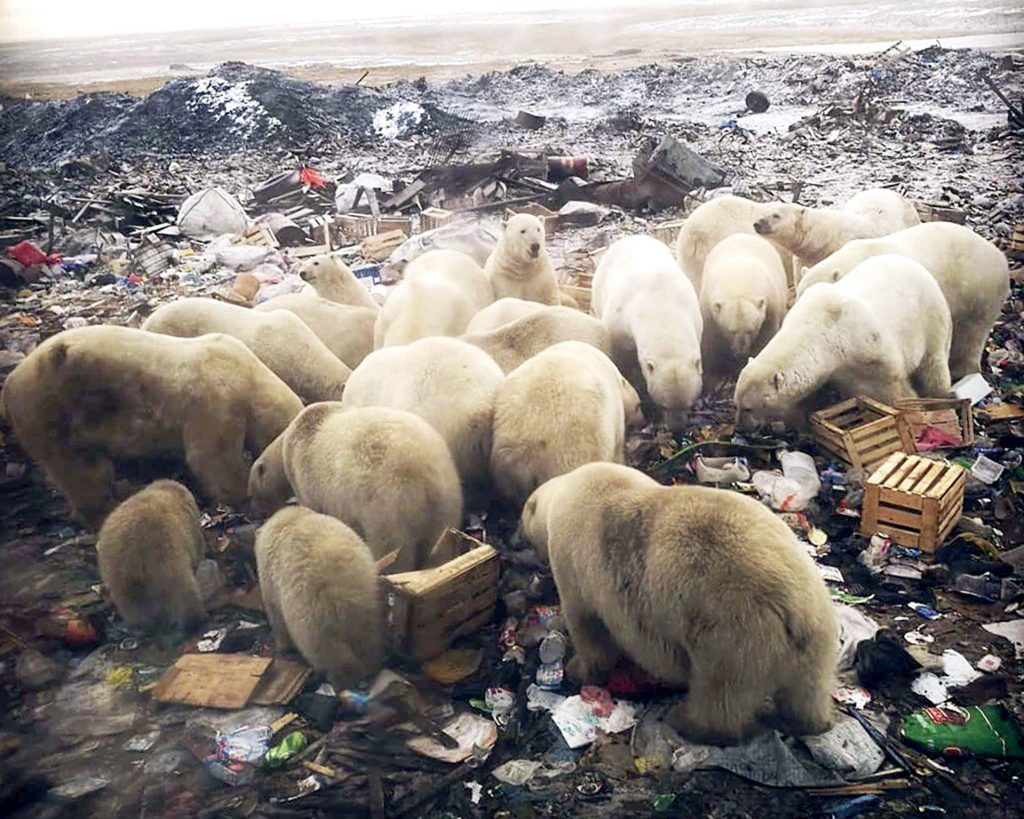 (EnviroNews World News) — Novaya Zemlya, Russia — As arctic ice melts due to human-caused climate destabilization, polar bears (Ursus maritimus) are being forced to move farther inland in search of food. This brings them into closer contact with people and landfills. Now, Russian scientists are sounding the warning about climate change and its ill effects on the majestic animal’s diet.

Ivan Mizin is Deputy Director with the Russian Arctic National Park, and alongside his team, they have been able to examine polar bear stomach contents as well as their scat. What they discovered is leaving environmentalists feeling disturbing.

“When [polar bears] visit household waste dumps near a person’s home, up to 25 percent of the contents of the stomach and excrement have various plastic waste: plastic bags, wrappers, etc.,” Mizin told a group at the international seminar “Arctic Tourism and Marine Litter” in Murmansk, according to Interfax. “At any moment, exceeding a certain percentage threshold will cause the animals to die.” 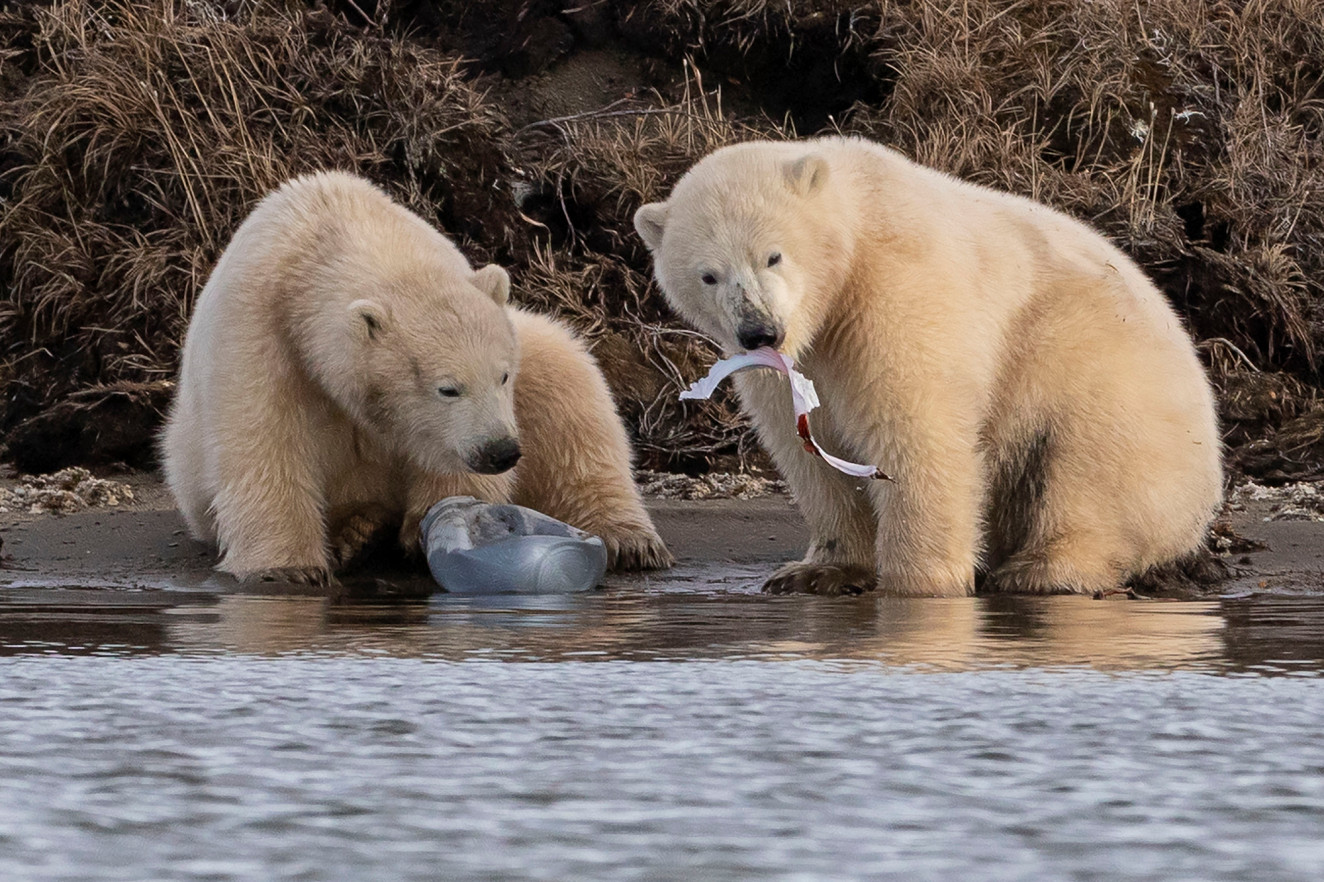 “What was a plastic gallon jug doing out here in far-flung Alaska? It just goes to show that what we’re doing is having an effect everywhere,” he said in an article by the New York Post. “Plastic floats. This could’ve come from anywhere, and now there’s every chance one of these young bears has ingested it.”

In 2018, Oceana published pictures taken by British wildlife photographer Kevin Morgans, who caught two cubs tussling over a plastic bag in Norway’s Svalbard archipelago. He thrilled at seeing the bears in their natural habitat but didn’t like the intrusion of garbage on the scene. 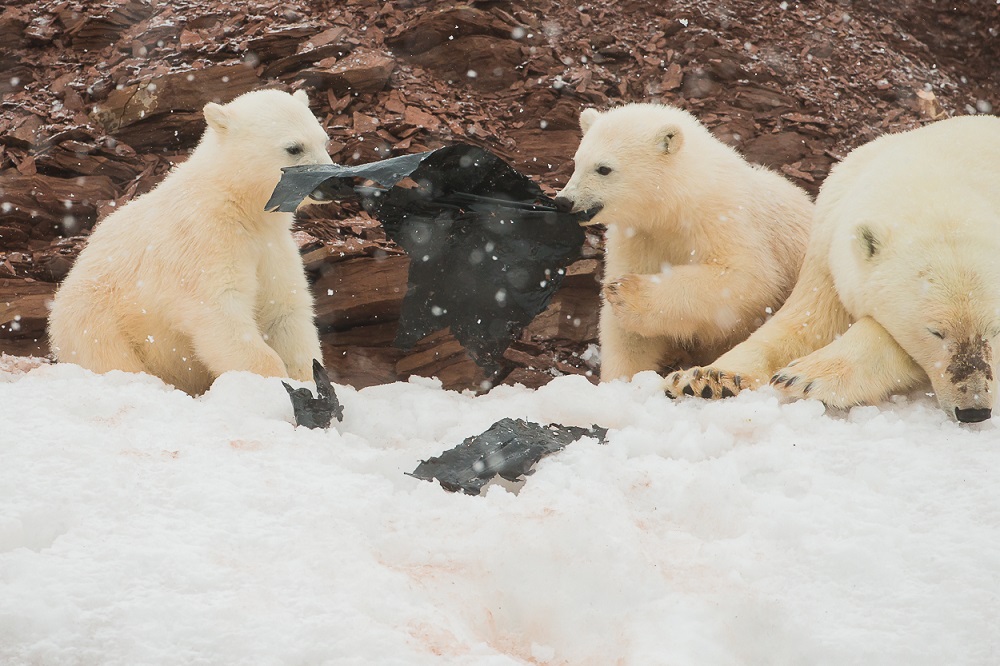 A healthy arctic ecosystem would see the polar bears hunting seals from sea ice. Nowadays, fewer seals and less sea ice are causing major problems for the animals. In Feb. 2019, the Russian archipelago of Novaya Zemlya saw an “invasion” when 52 bears entered the settlement of Belushya Guba causing the government to issue a state of emergency for the town. Loud noises, bright light, police patrols and dogs couldn’t drive them away from the town according to Dvinanews, the government press center for the district.

“You need to destroy everything that attracts polar bears,” Anatoly Kochnev, a senior scientist studying mammalian ecology at the Russian Academy of Sciences, told The Verge. The bears eventually left on their own, according to Hakai Magazine.

In an effort to improve its image for the tourism industry while protecting bears and people, Churchill, in Manitoba, Canada, did just that, when the community opened the “Alacatraz of Garbage” in 2006. It used an old shipping and receiving building with a concrete floor and bars on the windows to keep polar bears from accessing the trash and discourage their visits into the town.

“There are going to be less images and video of polar bears with flames in the background, or a polar bear chewing on a couch in the garbage or eating a tin can, for example, which were actually featured in National Geographic magazine,” John Gunter, who takes tourists to see the bears for Tundra Buggy Adventure, told the CBC. 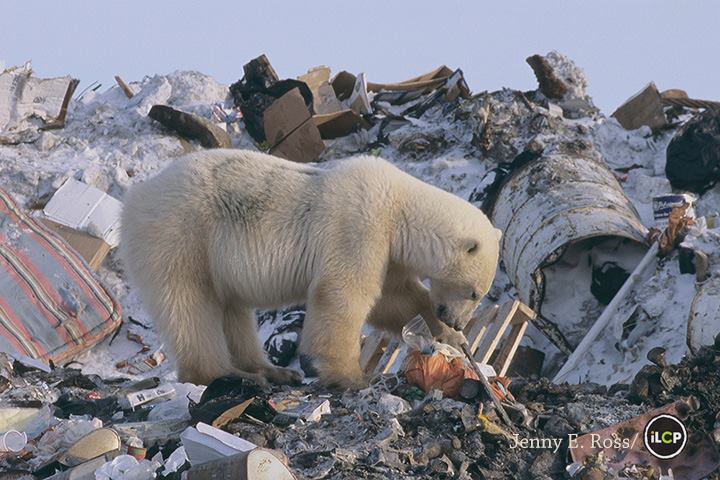 “Alcatraz” appears to be working according to a study released in 2013. The polar bears were found to be eating more caribou (Rangifer tarandus), snow geese (Chen caerulescens caerulescens), and eggs while consuming less garbage.

Bears can eat just about anything when they are hungry, but not all polar bears heading inland are starving. They are simply adjusting their diets to fit the food sources they can find. Aside from the problem with plastics, when the animals come into places where people live and work, there is a greater chance for negative human-bear interactions, which results in more bear euthanizations. Polar bears are listed as “vulnerable” by the International Union for Conservation of Nature (IUCN) so it’s important to keep the animals away from humans to protect them. 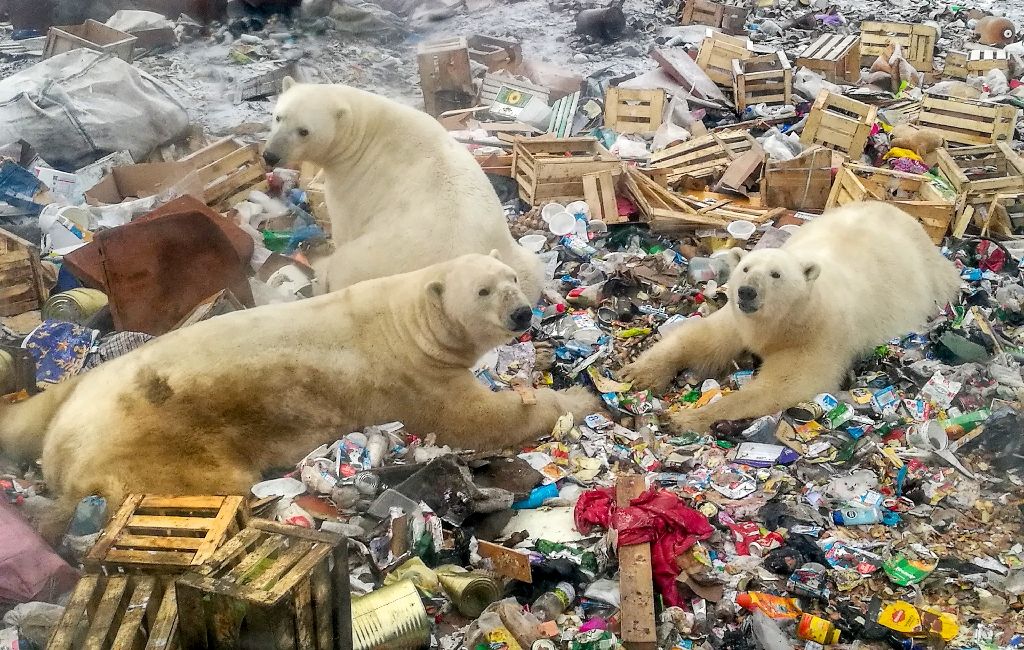 The spread of plastic in the Arctic isn’t just affecting polar bears. Birds and other mammals are also consuming the manmade material at an astonishing clip. Mizin cited the first-known case of a beached bowhead whale (Balaena mysticetus) in 2015 after the creature became entangled in discarded fishing nets. According to the Moscow Times, in Oct. 2019, Moscow rebuked North Korea for its poaching operations and the thousands of kilometers of netting their boats are leaving in the ocean.

OTHER STORIES ON PLASTIC POLLUTION AND WILDLIFE BY ENVIRONEWS

(EnviroNews World News) – Montreal, Quebec – Many tea makers are substituting plastic for paper with their top-of-the-line, pyramidal tea bags. These expensive, “silken” bags have more room to allow larger leaves to expand, which results in better tasting tea. But these smooth tea bags contain no silk at…

Want Some Salt With Your Plastic? – Study: 17 of 17 Sea Salt Brands Littered With Petrochemicals

(EnviroNews World News) – A study published April 6, 2017, in Nature.com’s Scientific Reports, examined 17 sea salt brands from eight different countries and found chemical impurities in all 17 samples. The primary contaminants include microplastics and pigments associated with textile, rubber and fiberglass products. The study was…

(EnviroNews World News) – There can be little dispute: the world is in a plastic conundrum – and the oceans are being hardest hit. Being filled with plastic bags, water bottles, lighters, milk cartons, and countless other plastic consumer items at a flabbergasting pace, things aren’t looking good…

Saving the World One Organic Cotton Shopping Bag at a Time

(EnviroNews California) – Lorin Trodderman of the Santa Cruz, California-based company Blue Lotus takes us through a tale of plastic pandemonium as he explains the devastation of plastic bags in our eco system, while simultaneously offering a simple and empowering solution. In this educational interview, Trodderman eloquently explains…

Many Kids Received More Plastic Than Candy or Eggs This Easter

(EnviroNews California) – Monte Rio, California – Sonoma County, California is considered one of the most progressive, green and environmentally friendly counties in the United States, but a community Easter egg hunt that went down on March 26, 2016, called the area’s green reputation into question. EnviroKids correspondent…