VIDEO: This Man Walks AND RIDES A 900 Lb. Grizzly Bear Through The Forests Of Montana - EnviroNews | The Environmental News Specialists
Skip to content 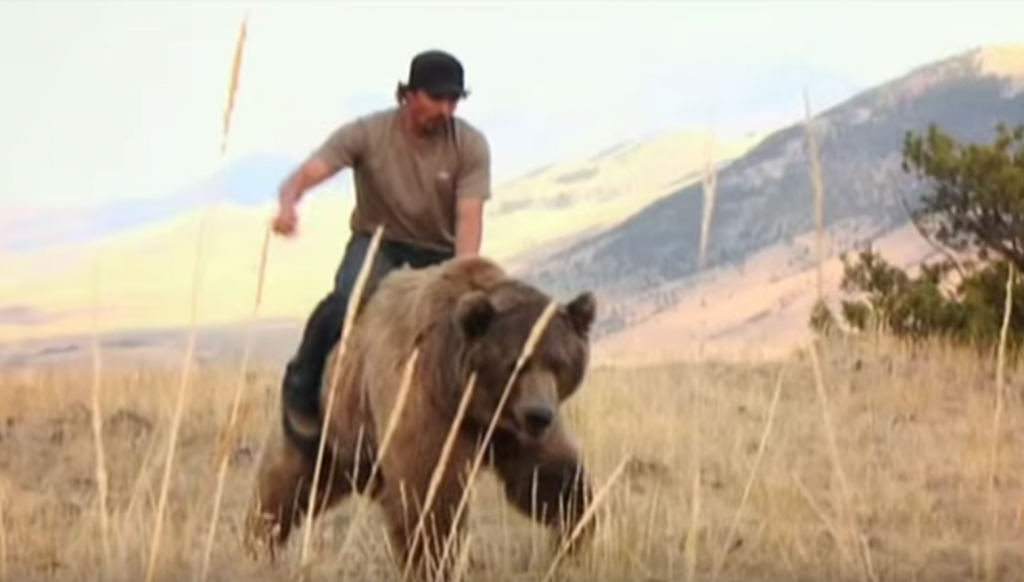 (EnviroNews World News) — A video featuring a man walking with, and later riding a tamed Yellowstone grizzly bear (Ursus arctos horribilis) through the pristine forests of Montana, has accrued over four million views thus far. The man, Casey Anderson, rescued the bear, that he later named Brutus, from an overcrowded wildlife park when he was just a cub. They’ve been together ever since — about 13 years now.

The video, produced by NatGeo, portrays a personal story, narrated by Anderson himself, and the content has left wildlife lovers and general viewers the world over, simply amazed.

Since rescuing Brutus, Anderson founded the Montana Grizzly Encounter (MGE) — an educational sanctuary that saves grizzles from perilous fates, while giving them a life they wouldn’t have otherwise had.

All the animals housed at Anderson’s spacious preserve were liberated from captive environments. Because the bears were born in captivity, they can never be released into the wild. The MGE says it gives these bears a new lease on life, and writes on its website that it “offers the public a place to come and learn about grizzly bears as they watch the majestic animals ‘up close’ in a beautiful mountain setting.”

Anderson says in another video that he thinks bears experience a range of emotions too. “I was having a hard time, was really upset about some things… I was crying,” Anderson said. “I could see that he wanted to take the pain away from me. He came up to me very gently and nudged me. He just stood by me unconditionally and he listened to me and he was there when I was crying. It’s truly what I needed from him. This relationship is a give-and-take,” the bear rescuer continued.

But for many viewers, the short film climaxes with Anderson not only taking Brutus for a walk through the forest, but riding him through it as well — a scene that seems like it would have to be computer animated to be real — and a scene that demonstrates just how close Anderson and Brutus really are.

But it’s not only NatGeo that’s taken notice of the remarkable story of Brutus the bear. Back in 2009, multimedia powerhouse Oprah Winfrey had Anderson and Brutus on the show via Skype, and what transpired in that segment as Brutus ate a smorgasbord of entrees, right from the dinner table, warmed the hearts of millions, and left the TV icon and her viewers in awe.

If only all Americans cared as much about grizzly bears as Casey Anderson, perhaps the species wouldn’t have to be harbored under the Endangered Species Act (ESA) at all — although that endangered designation could soon change.

A noteworthy point in regards to this story is that earlier this year, the United States Fish and Wildlife Service (USFWS) made a move to strip the Yellowstone grizzly bear of its protection under the ESA — a species that occupies less than two percent of its historic range in the lower 48 states. USFWS says its action is warranted though, claiming the Greater Yellowstone Ecosystem (GYE) population is stable — but many scientist, biologists, NGOs and environmentalists are furious with the Service and fervently disagree, saying unconnected populations still need to be adjoined to protect genetic diversity in the species — a feat they say is only possible under ESA protections.

This is not the first time USFWS has attempted to remove GYE grizzlies from the ESA. The Service tried a decade ago, but the non-profit org Earth Justice filed suit in federal court and successfully stopped the delisting.

Historically, concerning endangered species cases, environmental groups have had a high success rate of the courts siding with them — and the imperiled species they strive to protect. WildEarth Guardians and Center for Biological Diversity are, in and of themselves, responsible for USFWS being forced to move forward toward protection on some 800 species following an epic 10-year-long legal battle. Center for Biological Diversity boasts a 93% success rate when suing the feds in court over failing to protect endangered and threatened species.

Now wildlife lovers can only wait and watch, in hopes that the courts will side with environmentalists and the creatures of the forest once again.

To learn more about USFWS’ attempted delisting of the GYE grizzly bear, please check out the feature article by EnviroNews Wyoming on the subject below.