Video: Villagers Gang up, Attempt to Beat Bear to Death With Sticks in India - EnviroNews | The Environmental News Specialists
Skip to content 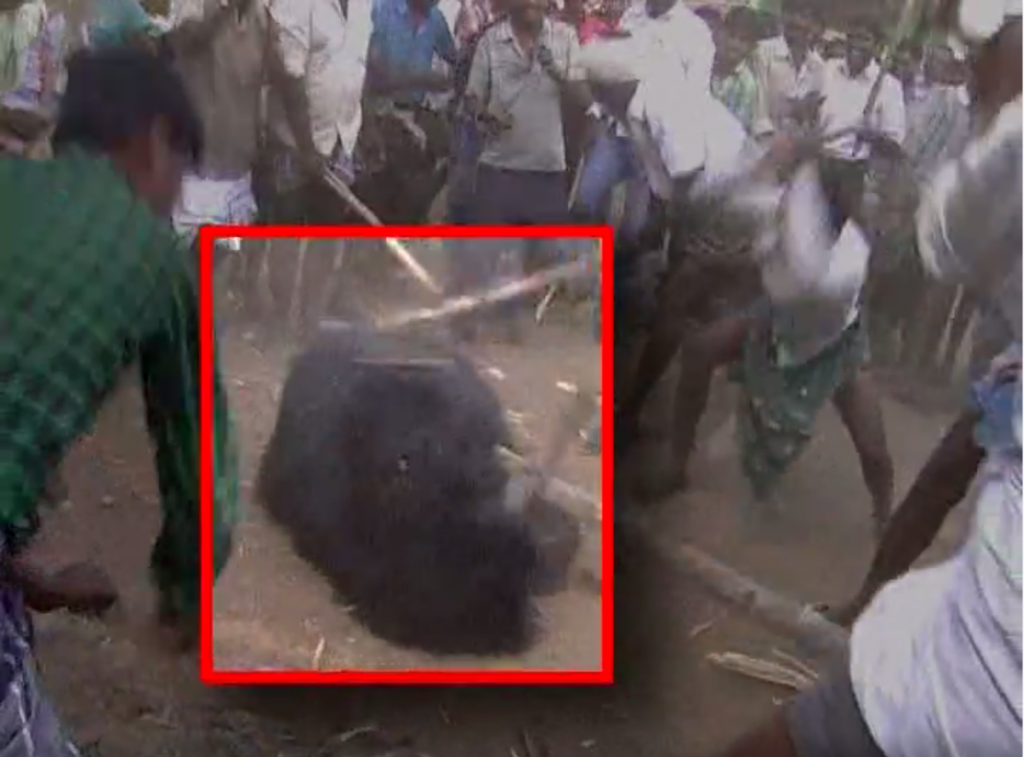 (EnviroNews World News) — Uppanayakanahalli, Chitradurga — Karnataka, India — A group of villagers in India attacked and attempted to beat a bear to death with sticks on Wednesday, January 13, 2015.

In a horrific case, the villagers of Uppanayakanahalli in Chitradurga attempted to beat a bear to death. The bear was reportedly terrorising the village for the past few weeks every night. And when they spotted the bear this morning, the angry villagers armed with sticks and stones tried to beat it to death. The bear had allegedly attacked a farmer yesterday afternoon. The villagers were reportedly angry because the forest officials had not appeared despite repeated complaints to take action.

In the U.S., if a bear attacks, or even interacts with humans, wildlife agencies typically euthanize the animal, disallowing interactions with humanity to continue.

According to India Today, villagers had lodged complaints with local “forest officials,” but those concerns fell on deaf ears.

In addition to attacking a farmer yesterday, the bear reportedly bit a police constable today, pushing villagers’ anger over the edge.

Make no mistake, bears can be a nuisance, or even downright dangerous if they are allowed to engage with people — especially if they figure out humans are often packing a vast array of very tasty treats. For this reason, parks and wildlife agencies strongly discourage feeding or engaging with bears in any way.

Unfortunately for villagers and the bear in Uppanayakanahalli today, those human/wildlife interactions came to a violent head wherein villagers did what they thought necessary to protect themselves from the creature. Apparently, this is what can happen without capable wildlife agencies in place to tranquilize and either relocate or euthanize animals that have become too comfortable or brazen with humans.

While it has been reported from the ground that the bear was able to escape with its life, EnviroNews World News has yet to confirm this.

Please weigh in on the blog below this article, or in the social media postings to express your views on this brutal human/wildlife conflict unfolded.