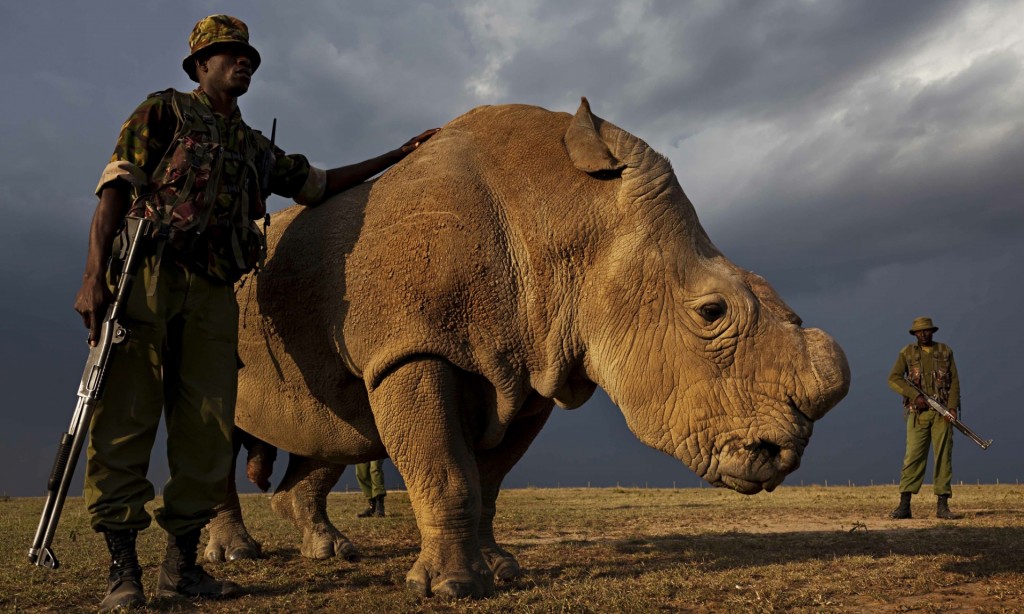 (EnviroNews World News) — Laikipia Kenya — It turns out that poachers can pillage a species right out of existence. That is in essence what has happened to the African northern white rhino, as game officials in Kenya try desperately to breed the last known male on the face of planet earth to one of two females.

His name is Sudan, and he’s protected 24/7 by armed bodyguards who roam the the terrain with him. That fact alone is sure to have some folks shaking their heads, but this is how bleak the situation has become for the once dominant and abundant foraging creature.

The world’s last remaining white rhino bull lives at the Ol Pejeta conservancy in central Keyna, and is actually one of five remaining in the species. Of the four females, two live with him in the preserve — the other two in zoos, in the Czech Republic and U.S. respectively. [EDITOR’S NOTE: Sadly, since the publishing of this article, two of the remaining four females have died, leaving only three remaining Northern White Rhinos in the world. All three are incapable of breeding.] The northern white rhino is one of two subspecies, the other being the southern white rhino. The southern subspecies is also in big trouble, although some consider its story a “conservation success.” It is estimated that there are around 20,000 of them presently remaining in the wild.

Coveted for the medicinal power in their incredible horns by the Chinese, the northern white rhino has now been plundered by poachers, as deeply into the extinction vortex as a species can go. In addition, the horn has been used as a ceremonial dagger in Yemen and sells for as high as $65,000 dollars per kilo on the black market — “more than gold or wholesale cocaine,” reports the Guardian.

Sudan has already had his horn, and with it his own defenses removed to deter would-be poachers, nevertheless, he is one of the last remaining hopes to save the species and is too valuable to be left unguarded. Habitat loss due to agriculture and other development has also played a massive role in the decline, and that problem won’t be going away any time soon. Political unrest, war and lawlessness have also taken their toll on the species as this type of environment has made conservation proposals difficult, if not impossible to execute.

Unfortunately, breeding efforts so far have failed, and Sudan, at 42 is no spring chicken. If he does not mate successfully, and soon, with one of the two remaining females on the preserve, the species could be lost forever. Let’s just hope Sudan doesn’t feel any sexual performance anxiety the way many human males do.

Natural attempts at reproduction have so far failed, therefore scientists and conservationists met earlier this year at the preserve to discuss the best course of action. It was determined at the meeting that a “test-tube rhino” would be the best chance of success.

Considering the elderly age of the remaining rhinos, it is thought by researchers that ultimately, the best chance of reproduction is to create a “test-tube rhino” and implant the embryo into a surrogate from the southern white rhino population. There are stores of frozen eggs and sperm available, but so far, this theory has not been carried out successfully.

Scientists now say that a natural pregnancy is extremely unlikely and that they are now in a race against time to harvest healthy eggs from the four remaining females.

The entire planet is now left with only the hope that scientists in tandem with Sudan to get the job done. Go Sudan!