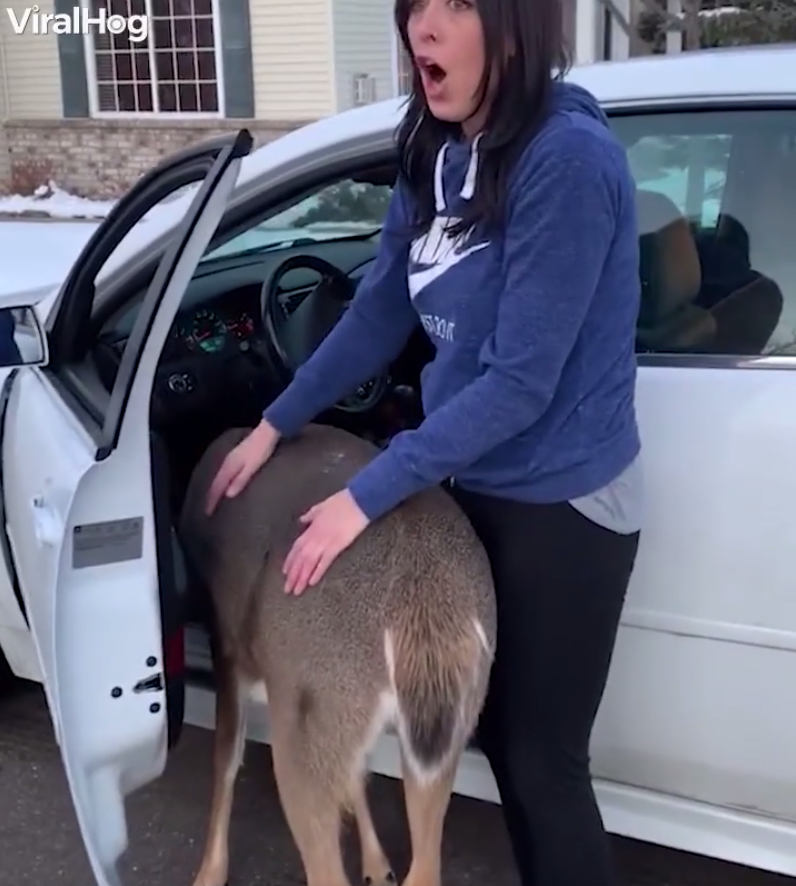 (EnviroNews USA Headline News Desk) — Hugo, Minnesota — Another adorable video of wildlife coming up and interacting with humans has surfaced out of Hugo, Minnesota and is picking up a lot of steam around the web. The video star this time: a curious female deer.

The video was published on January 7, 2019 by ViralHog, a company that buys, sells and traffics in potentially contagious video content sent in to them from everyday citizens. The segment was posted on both their YouTube and Facebook pages and features a whitetail deer (Odocoileus virginianus) entering a suburban neighborhood in Minnesota, wandering the streets, and coming right up to amazed onlookers to grab a pet or two before getting even more playful. As of January 15, the video has amassed nearly 570,000 views on Facebook and has picked up another

The video starts off with the deer walking down the snowy street directly on the thigh of a man walking in snow boots after grabbing some mail packages. 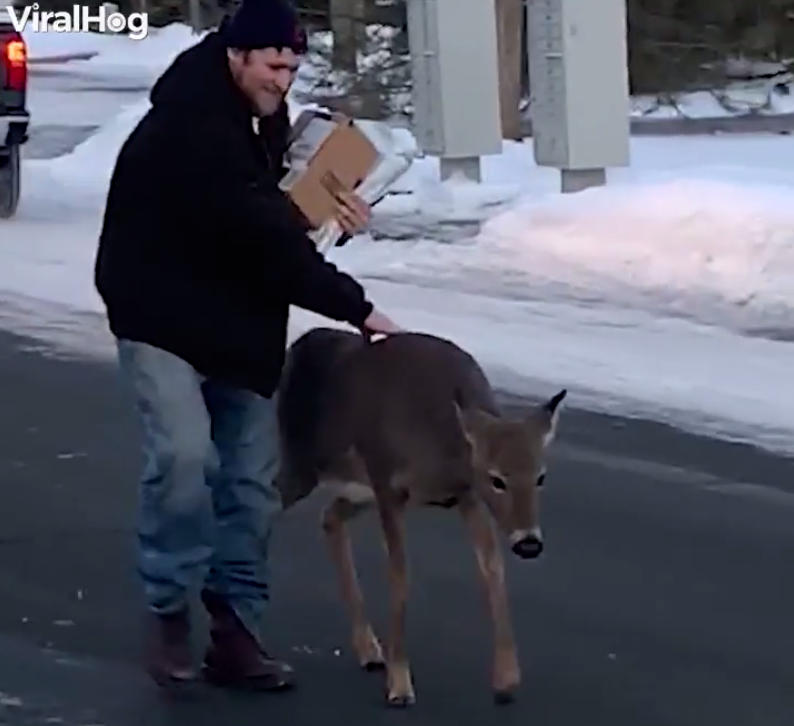 “Pet him,” an onlooker shouts. The man does just that as the doe gives him a good sniff up and down. 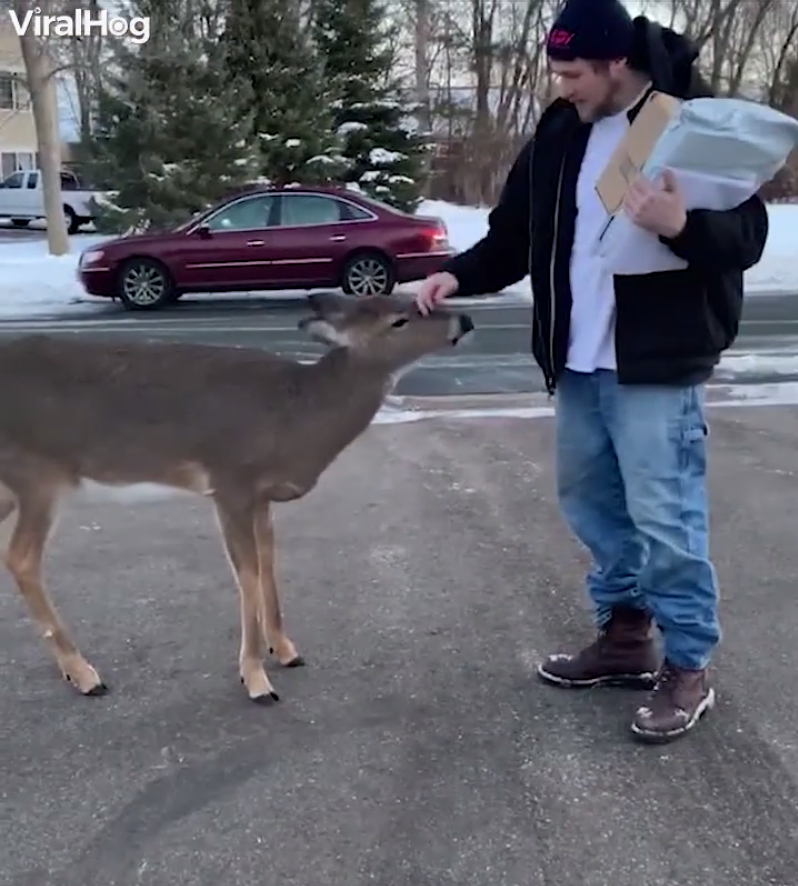 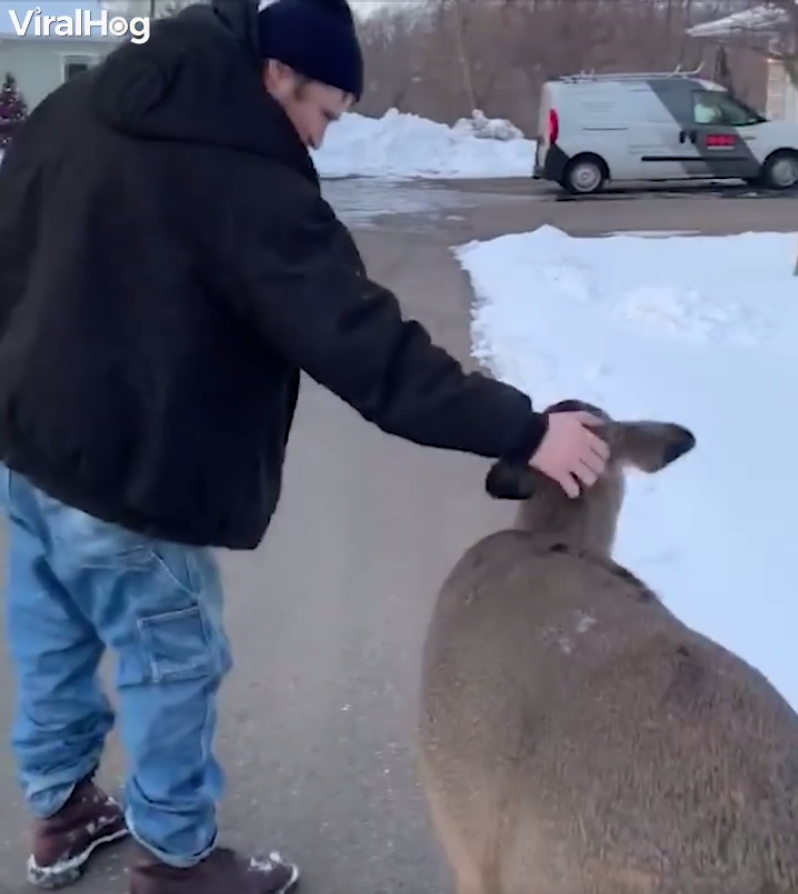 “That’s fuckin’ wild man,” the man with the packages responded after petting the curious animal and being thoroughly inspected by its nose.

The deer then cruises over to the onlookers who are filled with laughter, including the person filming the video, where she receives several more pets and pats on the head.  “That’s fuckin’ funny dude,” one voice is heard saying. 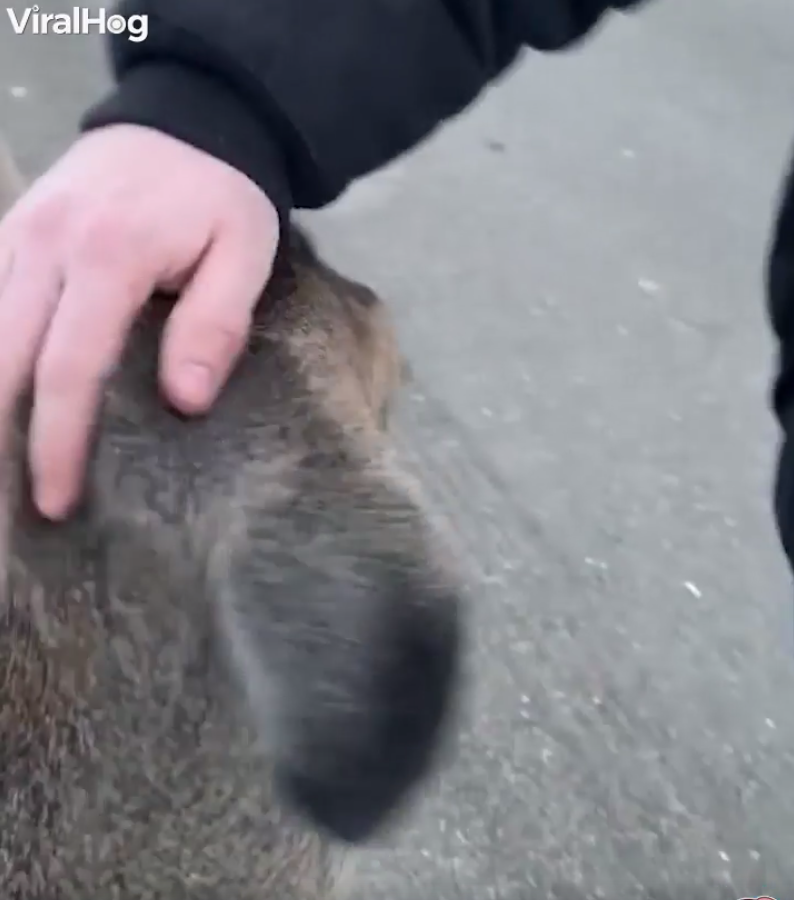 She sticks her head right up into the camera, and right into the crotch of one of the men, deepening her inspection of the curious bystanders.  “Oh my god!,” one man simply said, while another is heard saying, “that is a big doe!” 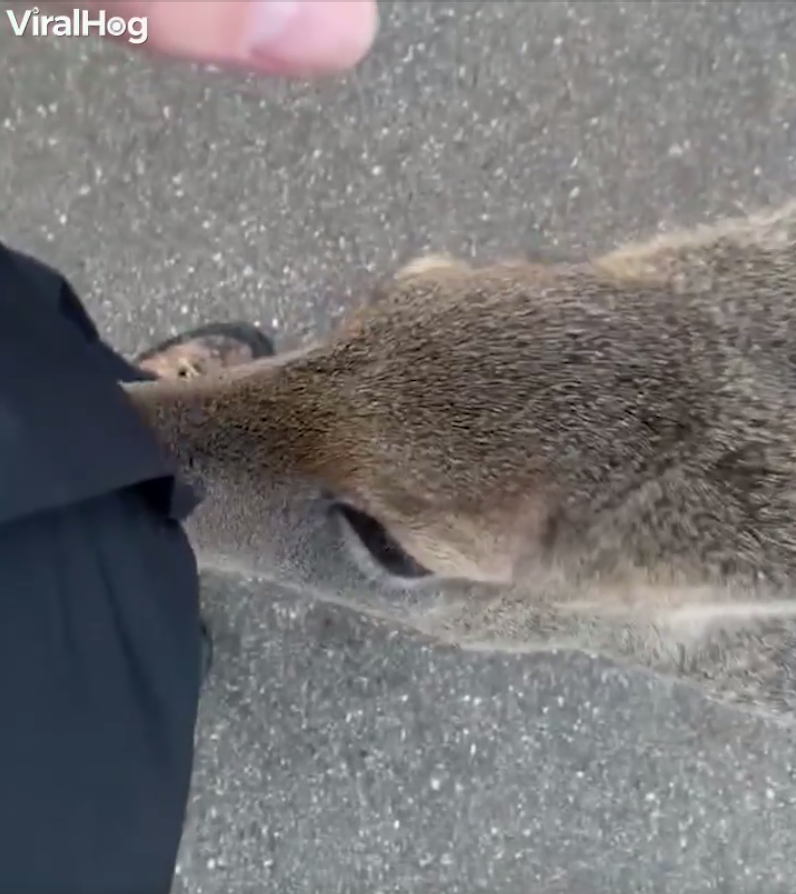 “Oh my goodness,” another voice exclaims. “That is the craziest thing I have ever seen,”  as the deer apparently catches interest in something across the street. 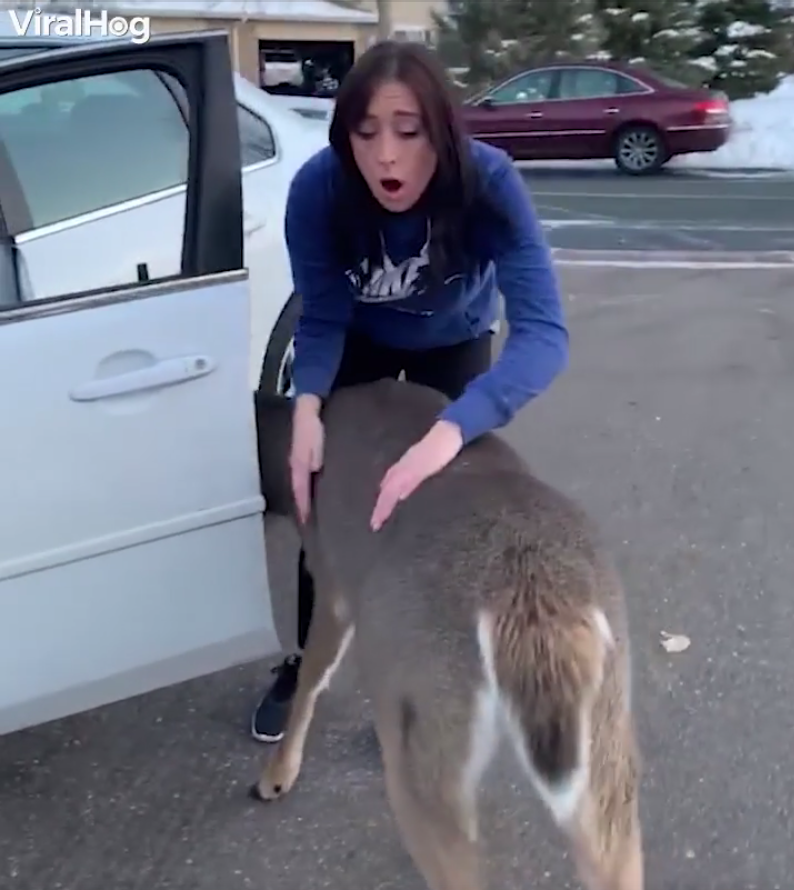 “Hello, are you hungry?” she sweetly says to the doe as she curiously sniffs and forages around on the car floor.

“She’s not gonna get in there,” one man says in a slightly unsure tone. 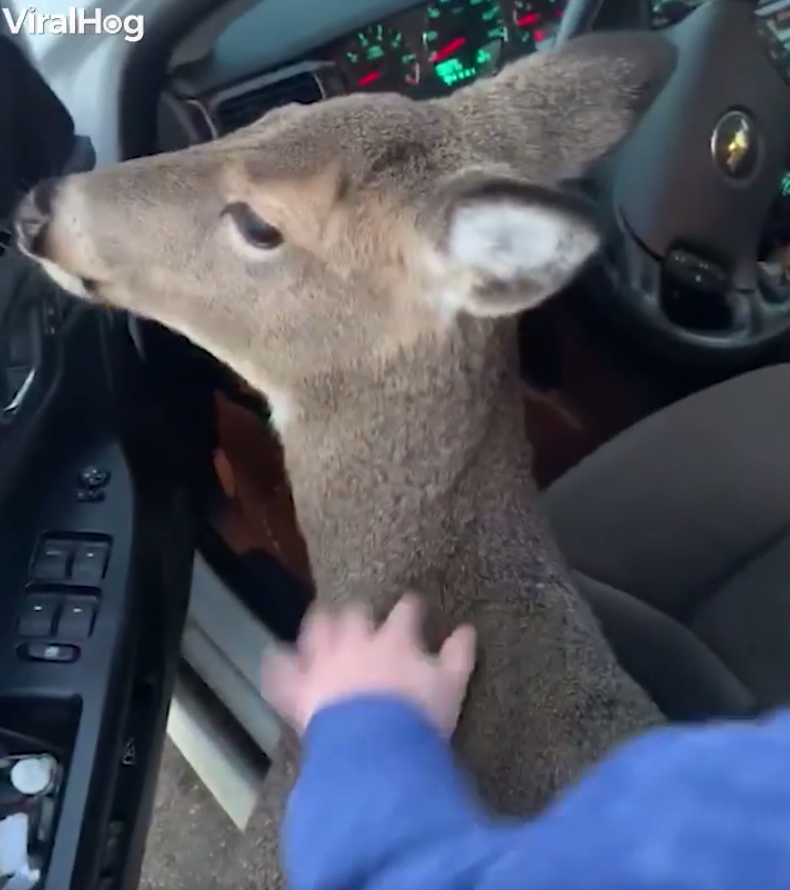 Another neighbor lady yells, seemingly from across the street, “What are you going to do with her?” To which, the lady in the blue sweat shirt, still stroking the deer replies, “I can’t even handle this right now!”

After pulling a couple food crumbs off the floor of the car, and deciding to not get into the drivers seat, the doe ducks back out to socialize and be encircled by the ever-growing crowd of onlookers.  The neighbor lady, now close to the camera says, “Do you think she came from that [deer] farm, up by Wyoming (meaning Wyoming, Michigan), ’cause she’s like looking for corn?”

“It doesn’t look like she’s starving,” one man added, as the lady in the blue sweatshirt musters up a couple McDonald’s french fries to feed her, which the deer initially nibbles at, but ultimately balked on. “You are the most beautiful thing I have ever seen in my life,” she continues. 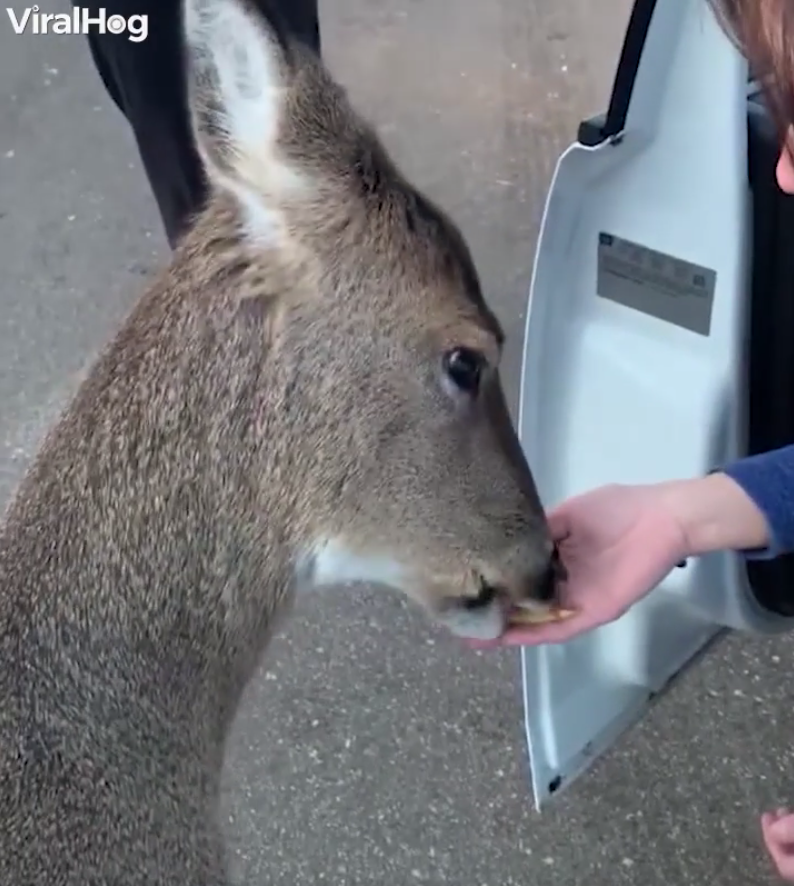 Perhaps this doe was simply sick and tiered of foraging around in the cold deep snow for scraps of dead grass, but at this hour it remains unknown to EnviroNews how the doe got there, or if she originated from the farm residents were wondering about.

The video concludes with members of the group walking away with the deer, hand-in-hoof, in a search for some yummy canned corn. It is also unknown to EnviroNews at this time what happened to the deer after the cameras stopped rolling, but whatever it was, she likely came away happen with a belly full of McDonald’s fries and canned corn.  For her, the curious adventure was likely well worth it.

OTHER GREAT STORIES ABOUT DEER BY ENVIRONEWS

(EnviroNews World News) – Amid the “sixth mass extinction,” or “Holocene extinction” as it is referred to by scientists, there are few glimmers of hope or good news. Species are dropping off the planet like flies, and despite the best efforts of government entities, NGOs and devoted conservationists,…