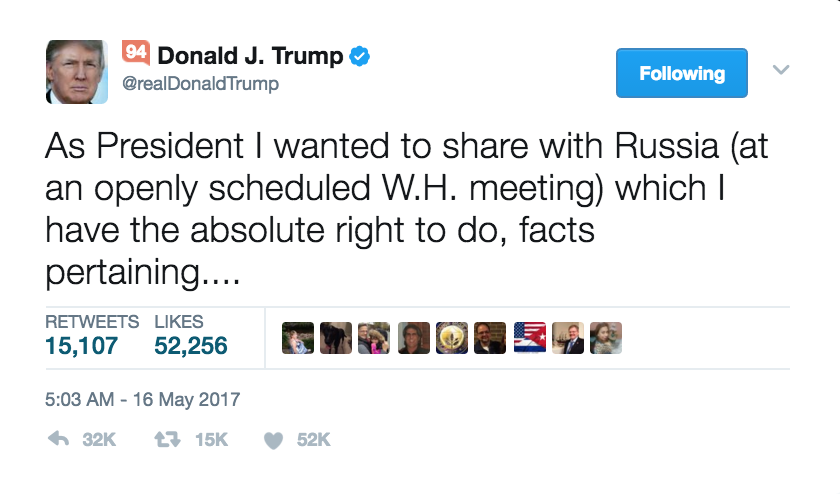 (EnviroNews Political Desk) — Washington D.C. — Will the Washington Post (WaPo) bring down another sitting U.S. president? The venerable newspaper’s historic reporting by Bob Woodward and Carl Bernstein uncovered the Watergate scandal, eventually leading to impeachment proceedings and the ultimate resignation of President Richard M. Nixon in 1974. Many are saying, Trump could be next.

Now, the administration of President Donald Trump is scrambling after WaPo reported that he revealed top-secret information to Russian diplomats during an Oval Office meeting that was off-limits to the American media. Trump this morning admitted in two tweets, “As President I wanted to share with Russia (at an openly scheduled W.H. meeting) which I have the absolute right to do, facts pertaining… to terrorism and airline flight safety. Humanitarian reasons, plus I want Russia to greatly step up their fight against ISIS & terrorism.”

As President I wanted to share with Russia (at an openly scheduled W.H. meeting) which I have the absolute right to do, facts pertaining….

…to terrorism and airline flight safety. Humanitarian reasons, plus I want Russia to greatly step up their fight against ISIS & terrorism.

The tweets essentially confirm the Washington Post’s story after Administration officials had described the story as “false.” National Security Advisor Gen. H.R. McMaster told reporters on Monday, “At no time were any intelligence sources or methods discussed, and no military operations were disclosed that were not already known publicly.”

Similarly, Secretary of State Rex Tillerson, who was present during the meeting, said, “During that exchange the nature of specific threats were discussed, but they did not discuss sources, methods or military operations.” Dina Powell, Deputy National Security Adviser for Strategy, flat-out said, “This story is false.”

“The story, to be clear, doesn’t say that the President disclosed sources and methods,” said Greg Jaffe, one of the reporters bylined on the Washington Post story, appearing on MSNBC’s The Rachel Maddow Show on Monday night.

However, as a Washington Post news analysis this morning states, “The most direct and immediate impact may be to jeopardize a critical source of intelligence on the Islamic State, thereby making it more difficult to detect and thwart terrorist plots.” Describing it as a “breach of trust,” the conversation may lead American allies to reconsider sharing key intelligence information with the U.S.

This afternoon, NBC, the New York Times and others reported that Israel was the source of the intel. Trump’s indiscretion threatens U.S. relations with one of its most important allies and a major source of Middle East intelligence, said the Times. The information was considered so sensitive that it wasn’t even shared with America’s closest allies – the so-called “Five Eyes” that includes Canada, Australia, New Zealand and the United Kingdom – according to the Wall Street Journal.

Kurt Eichenwald, a Pulitzer Prize-winning journalist and Senior Writer at Newsweek, tweeted about the revelation, “Trump gave highly secret Israeli intel to Russia, a major ally of Iran, which will now receive it. Iran is Israel’s greatest enemy. Get it?”

Trump gave highly secret Israeli intel to Russia, a major ally of Iran, which will now receive it. Iran is Israel's greatest enemy. Get it?

The Washington Post, in its reporting, did not disclose the specifics of the conversation. However, Eichenwald says, TASS, the Russian news agency Trump let into the meeting, is now reporting it.

Members of Congress on both sides of the aisle reacted quickly to the revelation. Referring to the Administration, Sen. Bob Corker (R-TN), Chairman of the Foreign Relations Committee, said, “Obviously, they are in a downward spiral right now.” Sen. Chuck Schumer (D-NY), said in a statement, “Revealing classified information at this level is extremely dangerous and puts at risk the lives of Americans and those who gather intelligence for our country.”

At a press briefing Tuesday morning, McMaster was asked if he stood by his claim that the story was false. The National Security Advisor responded, “I stand by my statement that I made yesterday. What I’m saying is really the premise of that article is false, that in any way the President had a conversation that was inappropriate or that resulted in any kind of lapse in national security.”

The Administration now appears to be trying to shift the blame. Trump tweeted, “I have been asking Director Comey & others, from the beginning of my administration, to find the LEAKERS in the intelligence community.”

I have been asking Director Comey & others, from the beginning of my administration, to find the LEAKERS in the intelligence community…..

McMaster continued that approach in his press meeting:

I think the real issue, and what I’d like to see debated more, is that our national security has been put at risk by those violating confidentiality and those releasing information to the press that, uh, could be used … uh, connected with other information available to make American citizens and others more vulnerable.

Trump’s repeated haranguing of respected news organizations such as the Washington Post as purveyors of “fake news” is undone by his own tweets, confirming the Post story even as he double-crosses American allies and his own spokespeople.