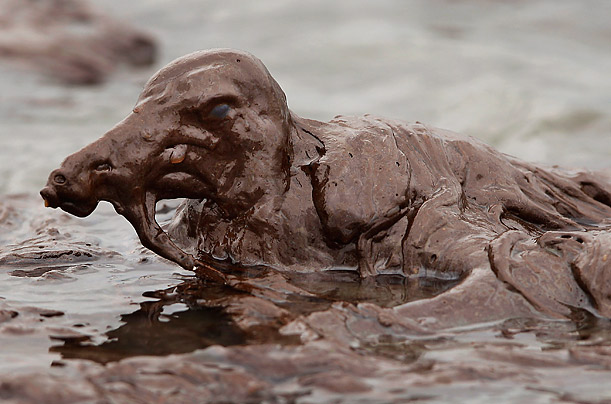 (EnviroNews DC News Bureau) — Washington DC — EnviroNews Editorial: How quickly we forget, or shall we say, how quickly the U.S. Department of the Interior forgets, as it has now given the go ahead for Shell Oil Company to commence drilling activities in the arctic’s Chukchi Sea.

In this editorial we humbly ask you, the reader, to contemplate a very simple, highly plausible, and downright horrific scenario and ask yourself if you are ok with it:

First, travel back in your mind to the unforgettable BP gulf oil spill of 2010. Recall for a moment the high-pressure catastrophe that gushed gas and crude oil uncontrollably for 87 days as BP and others floundered about, making things up as they went, in a desperate effort to cap the seafloor well, 5,000 feet under the surface of the water, as America and the world watched and prayed helplessly, wondering if the nightmare would ever end. Contemplate the fact that this entire oil drilling debacle took place in the warm, inviting, easygoing, tropic-like environment offered by the Gulf of Mexico. Now, in your mind’s eye, transplant this entire situation to the bitter cold, windy, brutal environment of the arctic. Instead of being in the densely populated areas in the Gulf, where hundreds of additional hands are a phone call and a short drive away, emergency crews have to be transported from the lower 48 states and are days, or even weeks away. Next, imagine all this, flowing naturally along with Murphy’s Law has unfortunately occurred at the end of drilling season, while the entire surface of the water transforms to ice and all oil rigs are necessarily called into shore — and with them, any hope of even attempting to plug the gushing disaster on the freezing arctic ocean floor. The gusher vomits forth oil underneath the ice for nearly six months before Shell Oil Company can even think about sending emergency workers back into the dangerous and choppy Chukchi Sea. To put the gooey black icing on the cake, experimental plugging efforts don’t go well, the weather doesn’t cooperate, and Shell is unable to stop the runaway gusher before the short drilling season is out, and the well continues to blast oil into the world’s oceans for yet another six months before plugging efforts can be made again.

Now, forgive us for taking you into the bad dream above, and allow us to snap you out of it and back into a world where that has not happened — yet. However, if you happen to be sitting at home in the cozy ol’ armchair thinking this scenario is purely fiction, allow us to pinch you and encourage you to think again. The above nightmare is, in our view, scarily all too real and entirely possible if Shell’s Chukchi Sea drilling plan is allowed to proceed, as Barack Obama’s Department of the Interior apparently thinks it should.

Although DOI’s approval is only a conditional permit and Shell will have to jump through local Alaskan hoops before drilling can commence in the icy choppy waters of the North, it sets the stage for the ultimate green light, and sends a message that the federal government is onboard.

The word “safely” is a word that has been used and abused in countless plans and permit applications by energy giants over decades past, and Shell’s simply ludicrous plan to pump the arctic seabed for black gold is no different. If industry told regulatory agencies “well, we’re not totally sure that we can do this safely,” obviously, they would never get a permit to being with. The term has been abused to such an extent in fact, that no one should take the little word at face value in 2015 if it is coming from the mouth of the energy industry. If a person cries wolf again and again and again, why should anyone take them seriously when they cry wolf this time? To expand on this concept, we want to encourage you to check out the short EnviroNews editorial video below on the outright scandalous use of the word “safely” by the energy industry.

It is our sincere hope that in some amount of months or years down the road you are not back here reading another EnviroNews breaking news headline titled Told Ya’ So! — Shell Oil Well Spilling Uncontrollably into the Arctic Sea. No amount of oil, and surely not a small reduction in gas prices could ever be worth putting the entire ocean ecosystem, and with it, all life on earth at risk.

Conventional on-land oil wells where blowouts can be for the most part plugged and controlled are one thing, the madness of deepwater oil exploration another, but drilling in arctic waters to dangerous depths of extreme pressure in a quest for yet more climate change exacerbating hydrocarbons, is downright insanity.

In regards to deepwater drilling and the BP spill of 2010, the fact that the United States Department of the Interior has a short-term memory no better than that of an ordinary house pet is disturbing at best. We, at EnviroNews, are left to wonder if DOI’s endorsement of Shell’s plan represents the most blatant example of the oil industry’s pimpery of the U.S. government — a government that now effectively behaves as a corporate prostitute.

Accidents happen. Period. End of story, and we surely can’t afford one here. Since DOI has failed to show any wisdom at all regarding deepwater arctic drilling, the world is now reliant on Alaska’s government to stop this extraordinarily dangerous plan, be the voice of common sense in the situation, and protect the people and wildlife on a little planet called Earth. We, at EnviroNews, implore Alaska to do just that.