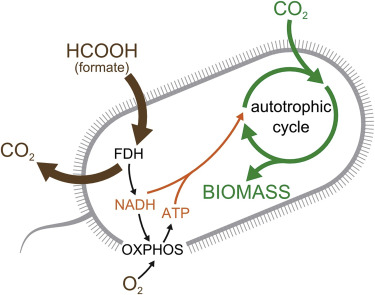 (EnviroNews World News) — Tel Aviv, Israel — Researchers have created a new strain of Escherichia coli, or E. coli, that can “eat” carbon dioxide and turn it into energy. They say the synthetic life-form could someday help reduce global greenhouse gases. Their hope is that this newly engineered organism will be able to convert atmospheric carbon dioxide, or CO2, into food, fuel and organic chemicals that humans can use, while counteracting anthropogenic climate change.

In a study published in Cell, scientists from the Weizmann Institute of Science in Israel announced they had created a new bacteria that eats CO2 for energy, rather than organic compounds like sugars and fats. While the study comes with a major caveat — the process currently produces more CO2 than it consumes — the research team believes their work can provide a foundation for carbon-neutral energy sources in the future.

Living creatures are split into two types of organisms. There are autotrophs, like plants, which create their own food from inorganic materials like light and carbon dioxide. And there are heterotrophs, like animals and some forms of bacteria, which rely on gobbling up other organisms and organic compounds to survive. Autotrophs make up the majority of Earth’s biomass — and they contribute to many of humanity’s sources of food and fuel.

Since the 1970s, scientists working in the field of synthetic biology, have been striving to create heterotrophs like E. coli in the lab. Part of their aim has been to produce a strain of bacteria capable of eating inorganic substances for energy — in other words, to turn a heterotroph into an autotroph for the purpose of consuming CO2.

According to a press release, the research team worked for months to convert E. coli’s food from sugars to CO2. The first challenge was to find out how much lab evolution of the bacterium would be required for the experiment to be successful.

Despite widespread interest in renewable energy storage and more sustainable food production, past efforts to engineer industrially relevant heterotrophic model organisms to use CO2 as the sole food source have failed, the press release explained further. The Israeli team was able to rewire the bacteria’s metabolic processes to produce all of its mass from CO2. Over several months, members gradually evolved the strain to make the bacteria more dependent on carbon dioxide, rather than sugars, for its growth.

“The study describes, for the first time, a successful transformation of a bacterium’s mode of growth,” Weizmann Institute of Science postdoctoral fellow Shmuel Gleizer said in the press release. “Teaching a gut bacterium to do tricks that plants are renowned for was a real long shot… [But] in addition, seeing the relatively small number of genetic changes required to make this transition was surprising.”

But the team acknowledges the study’s biggest limitation: the engineered bacteria spits-out more CO2 than it consumes. The authors also note, more research is required to see if it’s possible to scale the approach for widespread, industrial applications. In the future, these scientists aim to harness electricity as an energy source, thus eliminating the excess release of CO2. For now, they describe the study as a “steppingstone” towards more sustainable types of production.

“When we started the directed evolutionary process, we had no clue as to our chances of success, and there were no precedents in the literature to guide or suggest the feasibility of such an extreme transformation,” Gleizer added. “In addition, seeing in the end the relatively small number of genetic changes required to make this transition was surprising.”

Editor’s Note: It should be noted, that since this is the first time a bacteria has every been engineered to live and grow from a diet of exclusively carbon, no information was available for the research of this story on any potential environmental impacts or potential effects to the health of organisms or ecosystems, should the bacteria be freed and find a way to propagate on its own in the wild.