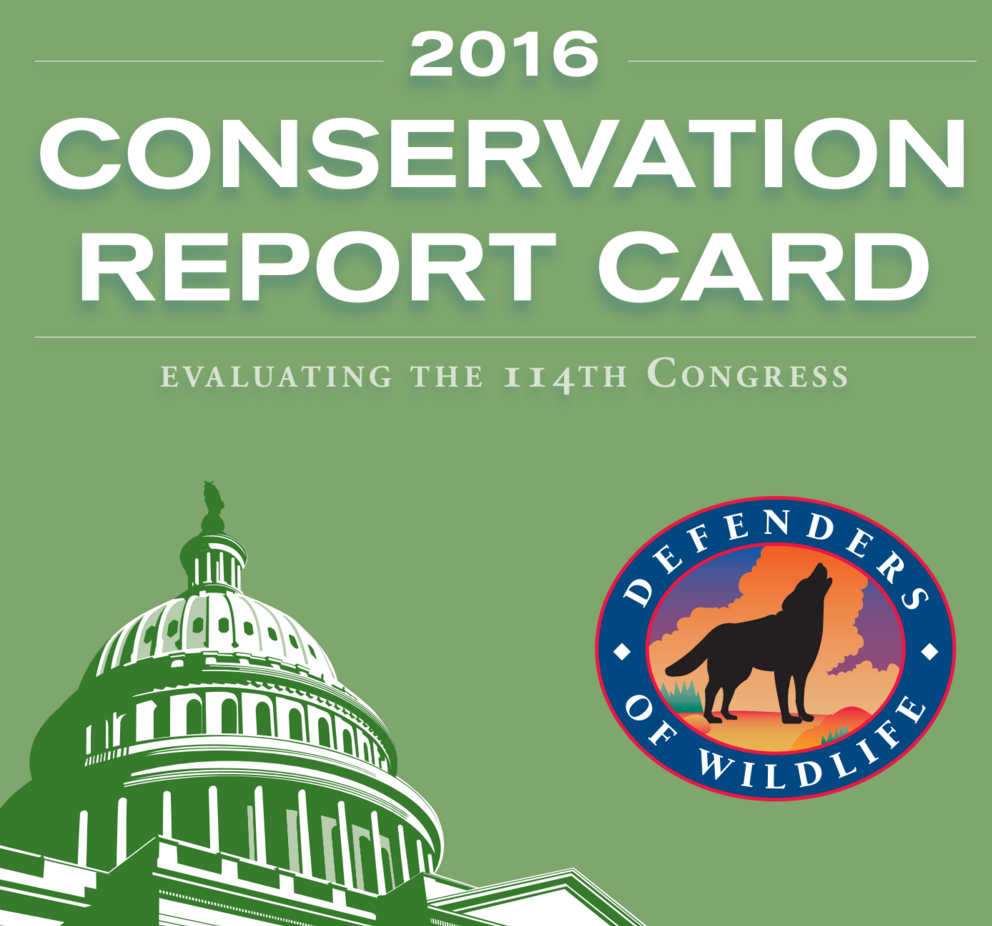 (EnviroNews DC News Bureau) — Washington D.C. — Thirty-three senators, all of them Republican, voted against conservation 100 percent of the time, according to the 2016 Congressional Report Card, released by Defenders of Wildlife (Defenders) on March 23, 2017.

The report card reviewed 13 Senate votes and 20 votes in the House of Representatives during the 114th Congress last year. These votes included legislation related to the Endangered Species Act (ESA), funding for the environment, climate change and protections for the gray wolf (Canis lupus) and other species.

“In the last session of Congress there was a noticeable increase of votes trying to weaken and undermine the Endangered Species Act,” said Jared Saylor, Vice President of Communications for Defenders. “This is unacceptable. The ESA is a highly successful law that ensures species on the brink of extinction have a chance at survival. Congress should focus on how to fully fund this important law, not gut it.”

In the House, of 435 members, 184 had a complete anti-conservation voting record. All of these were Republican. The states of Alaska, North Dakota, Oklahoma, South Dakota, Utah and Wyoming had House delegations that all voted against conservation all the time. These include familiar names such as Jason Chaffetz and Rob Bishop from Utah, Pete Sessions of Texas and Californians Dana Rohrbacher and Darrell Issa.

On the Senate side, legislators from Alabama, Alaska, Arkansas, Iowa, Kansas, Louisiana, Nebraska, Oklahoma, South Dakota, Utah and Wyoming received scores of zero percent and could be counted on to vote against wildlife and the environment 100 percent of the time.

It’s not all bad grades though, as many states were notably in support of conservation measures. Senators from California, Connecticut, Hawaii, Maryland, Massachusetts, Michigan, Minnesota, New Jersey, New Mexico, New York, Oregon, Rhode Island, Vermont and Washington received 100 percent scores from Defenders. These were all Democrats.

In the House of Representatives, 151 members voted in favor of conservation measures 100 percent of the time. They were all Democrats as well. Only two Republican congressmen voted more than half the time for conservation: Bob Dold of Illinois and Michael Fitzpatrick of Pennsylvania.

Defenders personally delivered these grades to each congressional office. The DC-based organization also produced a pocket guide in PDF form, with the aim of informing voters how their elected members of Congress stood on conservation legislation.

This report card does not include any actions from the 115th Congress, which has already moved forward on a spate of anti-environment measures. These include the use of the Congressional Review Act (CRA) to void the Alaska National Wildlife Rule (Refuge Rule), which amongst other things had prohibited the killing of wolf pups and bear cubs, as well as the mothers, while in their dens. The current Congress also used the CRA to cancel the Obama-era Stream Protection Rule.

Defenders of Wildlife is a non-profit organization with 1.2 million members that works to protect wildlife across the U.S.