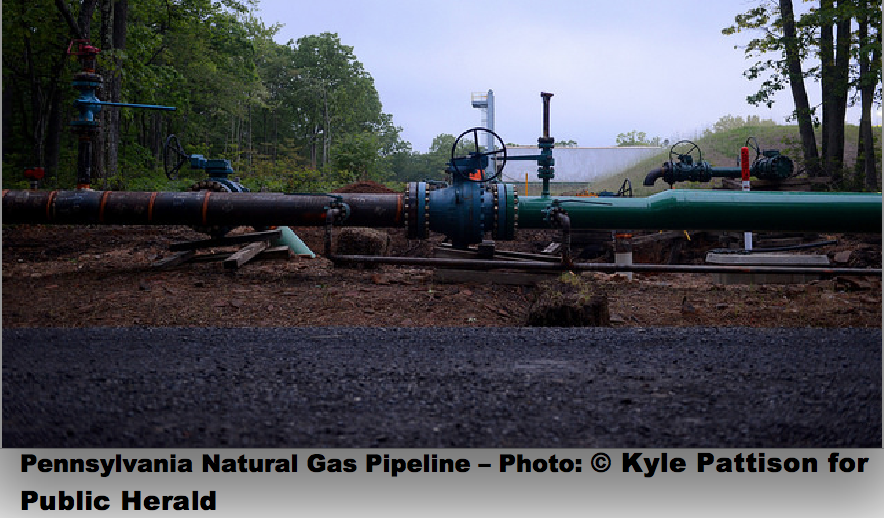 (EnviroNews World News) — Unityville, Pennsylvania — A group by the name of Beyond Extreme Energy sent in a fresh-on-the-wire press release to EnviroNews USA on June 11, 2015. The subject: Ongoing outrage and fear, near the Pennsylvania community of Unityville, over a Williams Companies, Inc., natural gas spill on the Transco pipeline two days ago.

Local media reported the incident occurred on tuesday night at around 9:40 P.M. and that residents up to a mile away were rocked by an explosion followed by a prolonged “jet engine” type sound and the smell of gas. In turn, the incident resulted in a fearful disorientation throughout the surrounding communities.

As many as 130 nearby residents were evacuated from their homes for “several hours,” according to the Lancaster Online.

Williams spokesman Chris Stockton specified the episode took place on the Transco Leidy Line and told Reuters, “There was no fire,” and that the company, “responded to the rupture pretty quickly by remotely shutting off the flow of gas.”

Regarding a proposed 178 mile expansion to its existing Transco operations titled the “Atlantic Sunrise Project”, Williams states on its website:

The Atlantic Sunrise Project is designed to supply enough natural gas to meet the daily needs of more than 7 million American homes by connecting producing regions in northeastern Pennsylvania to markets in the Mid-Atlantic and southeastern states. The expansion will add 1.7 million dekatherms per day of pipeline capacity to the Transco system.

The press release from Beyond Extreme Energy repeatedly blasted Williams’ safety record and the proposed expansion, stating in the document:

Tuesday night’s pipeline rupture highlighted the safety concerns of many local residents. This rupture happened just one day after concerned residents of the Benton area came together for the first time to discuss the impacts of even more pipeline development, and how to resist Williams’ proposed Atlantic Sunrise Pipeline.

The Benton meeting and the pipeline rupture happened amidst a flurry of anti-pipeline activity in Columbia County, and Pennsylvania as a whole. All ten counties that would be impacted by the Atlantic Sunrise Pipeline have seen active resistance to this project. Safety in the event of explosions is the main concern of many.

That sounds like damage control 101, however, it was reported on the ground that people could smell gas in the air “up to five miles away.”

Fortunately, no injuries were called in due to the incident, although it did apparently turn nearby foliage brown.

The entire press release sent in by the activist group Beyond Extreme Energy is just below:

Benton, PA On Tuesday, June 9th 2015 at approximately 9:30 p.m. the Williams Transco pipeline running along the Lycoming/Columbia County line ruptured, releasing gas into the air, according to a phone call with the Pennsylvania Department of Environmental Protection. Nearby residents experienced confusion and fear upon feeling the impact of the explosion from miles away, hearing a prolonged roar sounding similar to a jet engine, and smelling gas in the air. After calling emergency services and neighbors, many residents were told that it would be safest to evacuate the area until the problem was resolved. Williams is the same company proposing to build a 178-mile, 42” high pressure natural gas line through Pennsylvania, which would cut through the Benton area.

“I am a resident of Jackson Township and I live near the village of Waller with my infant son, husband, and many pets. The rupture last night shook our house from several miles away,” said Alysha Suley of Waller, PA. “Factual information regarding the rupture has not yet been widely disseminated, but I have learned that the explosion and roaring sounds involved the Williams Transco pipeline.” Williams is the same company who wants to build a new 178-mile, 42” natural gas pipeline through Columbia County. Other nearby residents reported the smell of gas in the air from up to 5 miles away, and could also hear the roaring sound.

Tuesday night’s pipeline rupture highlighted the safety concerns of many local residents. This rupture happened just one day after concerned residents of the Benton area came together for the first time to discuss the impacts of even more pipeline development, and how to resist Williams’ proposed Atlantic Sunrise Pipeline.

The Benton meeting and the pipeline rupture happened amidst a flurry of anti-pipeline activity in Columbia County, and Pennsylvania as a whole. All ten counties that would be impacted by the Atlantic Sunrise Pipeline have seen active resistance to this project. Safety in the event of explosions is the main concern of many.

“Tuesday night was terrifying because of all the ‘what ifs’ it brought up. The rupture was caused by a pipeline built and operated by the same company as the proposed Atlantic Sunrise. What if a larger pipeline, or one nearer to our home, had failed?” Suley expressed of her safety concerning nearby existing and proposed gas infrastructure.

Residents of Columbia County have been organizing at the township and county level since last April when the Atlantic Sunrise Pipeline was announced. The next meeting of concerned residents of the county will be hosted by the Shalefield Organizing Committee and the Clean Air Council on Monday, June 16th at 6:00 p.m. at the Pro Shop Café at the Links Golf Course in Hemlock Township. An attorney will be present to discuss his legal concerns with the leases Williams is offering landowners along the potential right of way of the ASP. For that reason, if you are a concerned resident facing a gas lease, you are urged to attend and ask questions.

This meeting will continue to bring residents into a year-long, active movement to prevent dangerous shale gas infrastructure from continuing to be built in our region. All concerned residents and the local press are invited and encouraged to attend. Please contact [email protected] or call 570-204-8927 for more information on the local movement to stop the proposed Atlantic Sunrise Pipeline.