Bumblebees Will Now Deliver and Deploy a New EPA-Approved Pesticide in an Effort to Save Bees — How’s That Work? - EnviroNews | The Environmental News Specialists
Skip to content 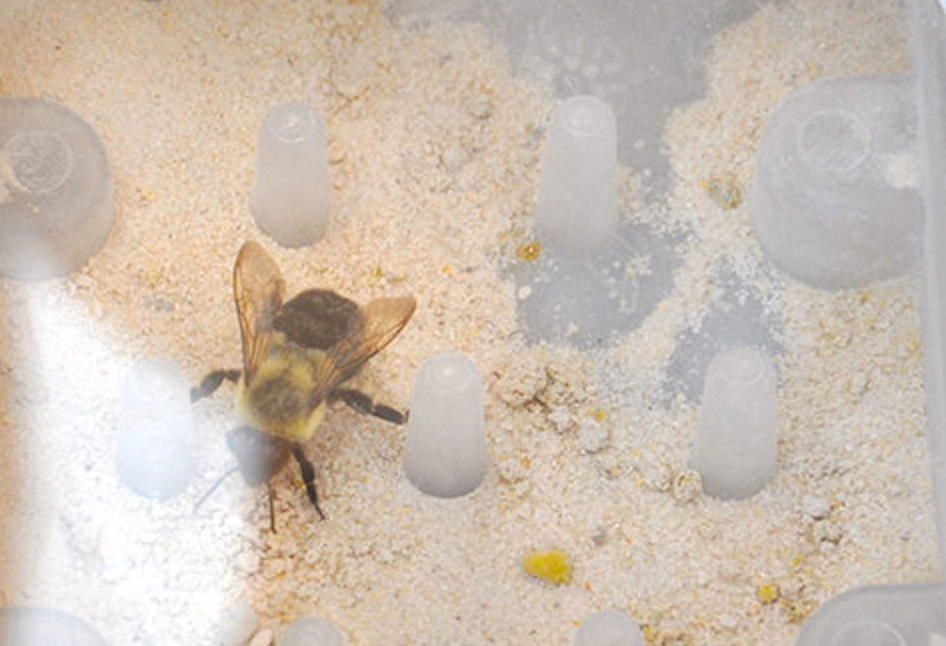 (EnviroNews USA Headline News Desk) — Washington DC — The U.S. Environmental Protection Agency (EPA) is allowing an exemption for a new type of organic fungicide aimed at helping bumblebee populations in distress. The delivery method for the new substance: the bees themselves. The new rule marks the first time the EPA will allow a pesticide to be carried and deployed by bees.

Created by Canadian company Bee Vectoring Technologies International (BVT), Clonostachys rosea CR-7 is intended to protect “high value” crops such as almonds, blueberries, strawberries and sunflowers.  Also known as “Vectorite,” it was approved for commercial use via an “exemption from the requirement of a tolerance” filing in the Federal Register by the EPA on August 14, 2019.

Fungicides are a type of pesticide designed to kill mold and mildew.  But in 2017, a nationwide study released in Royal Society Publishing caused “alarm” in the scientific community when it was discovered that several of the most common fungicides used in U.S. agriculture today were the primary culprits driving bumblebee decline.  BVT says its product offers a benign solution, though some bee biologists are still skeptical.

“By using commercially reared bees to deliver biological products, growers can protect crops, increase crop yields and enhance their sustainable growing practices by reducing the use of chemicals and other costly and increasingly scarce resources including water, fuel and labor,” said Ashish Malik, CEO of BVT. He also pointed out that because the agent is delivered to the plant with precision accuracy by the bees that far less of it is required, in contrast to indiscriminate spraying methods where a large amount of pesticides is dispersed with a high percentage of the chemicals missing their intended target, falling out onto land or into water sources instead.

In a marketing video on its website, the company explains that the CR-7 Vectorite powder is actually a “naturally occurring, non-genetically modified, unique fungus found throughout the world,” and claims “it blocks diseases from establishing in the plant, and is safe for plants and animals.”

BVT chose the CR-7 microbial strain in particular because it “can quickly colonize [tissue] around the flower of the plant,” according to NBC. “It protects crops against pathogens that enter and attack the crop in or through the flower area,” Malik said, adding, “This makes it an ideal choice for delivery using bees.”

So, just how do the bees deliver Vectorite to the crop’s flowers one might wonder? The process, known as “bee vectoring,” is quite rudimentary. When the bees return to the BVT-manufactured hive, they walk through trays where they pick up Vectorite powder on their legs and fur. They then distribute this to plants when they land on flowers to collect pollen. The company claims the process is harmless to the bees as well.

The system uses bumblebees instead of honeybees because in certain ways, they are superior pollinators and are more resilient. For example, bumblebees can fly and pollinate crops in weather that is much colder and damper than their honeybee counterparts. Their wings beat an astonishing 130 times per second causing the low humming sound attributed to bumblebees.  But strong vibrations generated by that sound, coupled with its heavier bodyweight, create what is known as “buzz pollination” which leads to more successful fertilization and higher yields in crops because it shakes loose more of the flower’s pollen.

In general, bees are the most significant pollinators in the ecosystem, fertilizing approximately 75 percent of the crops humans eat for food. “While other animals pollinate, bumblebees are particularly good at it,” reported LiveScience in 2017. U.S. beekeepers have reported a devastating 41 percent colony loss during the past year, with wintertime die-offs hitting the highest numbers ever recorded. The dismal statistics renew fears that America’s bee populations are spiraling downward at an alarming rate.

John Swanson runs a corn, soybean, wheat and sunflower farm in Minnesota and has been helping BVT test CR-7 for the past three years.  “Most farmers are very concerned about using products that can hurt the environment,” he told NBC News. “Bees are important to the sunflower crop. I have worked with seed production for about 40 years, and bees are the only pollinator for hybrid sunflower seed production.”

Sclerotia is a fungus that wreaks havoc on sunflower crops.  “This fungicide suppresses sclerotia by about 40 percent,” Swanson continued. “It’s the best product I’ve seen so far.”

But Sheila Colla, a conservation biologist at the University of York, thinks Vectorite will do little to reverse the precipitous decline of the wild bumblebee population. “Insecticides are applied to crops to stop pest insects from harming the crop, and I assume these farmers will continue to use insecticides in addition to these fungicides for fungal diseases,” she said. “I don’t see evidence of this replacing insecticides.”

Colla also criticized the practice of using managed bees for pollination at all, citing the potential for pathogen spillover into wild bee populations.  “It is most likely that species [like] the endangered rusty patched bumblebee (Bombus affinis), [rapidly declined] because they were exposed to a novel disease from managed bees,” she said.

“By moving our systems to relying more on managed bees, we put all of our eggs in one basket, so to speak,” Colla continued to NBC News. “If something happened to those few managed species and they collapse, as we saw with the western bumblebee (Bombus occidentalis) and with colony collapse disorder in U.S. honeybees, we put our ability to pollinate crops at risk.”

But as reported by The Guardian, the 2017 study determined that chemical fungicides were the “strongest factor linked to steep bumblebee declines.” If BVT’s Vectorite CR-7 can at least reduce the large-scale application of chemical fungicides without harming the insects, many see this as a net-positive in the battle for bees.

OTHER COOL STORIES ABOUT BEES BY ENVIRONEWS

(EnviroNews USA Headline News Desk) – Neonicotinoids, which are powerful insecticides and neurotoxins, have been found in the finished drinking water of two Iowa public water facilities. These chemicals were detected by U.S. Geological Survey (USGS) researchers, whose findings were published in a study titled, Occurrence of Neonicotinoid…