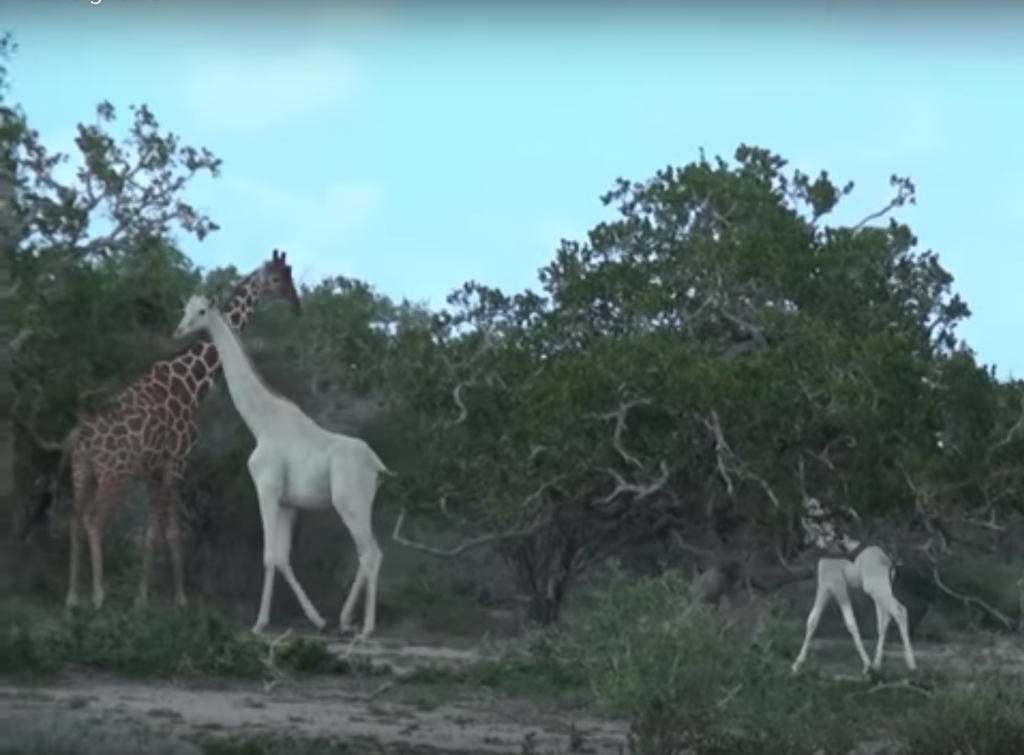 Locals quickly notified rangers from the nearby Hirola Conservation Program — an organization setup to help protect native antelope — who then rushed to the scene and captured footage.

“We hurriedly headed to the scene as soon as we got the news,” Hirola said in a statement. “And lo! There, right in front of us, was the so-hyped ‘white giraffe’ of Ishaqbini Conservancy!”

The event actually occurred in May, but park rangers didn’t release footage of the event until August 2.

The knee-jerk reaction has been to call these dazzling creatures “albino,” but that is probably not the case. The “condition” is most likely caused by a rare genetic mutation called “leucism,” in which the animal looses partial pigmentation in the skin, hair, feathers, scales or cuticle, but not in its eyes as would be the case with a true albino. Albinism, which is a congenital condition, causes the animal’s body to loose pigment in all organs where leucism does not.

Reports from the ground said the animals were exceptionally calm and didn’t seem to mind being captured on camera. “They were so close and extremely calm and seemed not disturbed by our presence,” a blog post by Hirola stated. “The mother kept pacing back and forth a few yards in front of us while signaling the baby giraffe to hide behind the bushes.”

Despite all the warm fuzzy feelings surrounding the extraordinary mother and calf giraffes, many commenters in the Program’s blog have voiced concerns that the rare appearance of the animals will make them more susceptible to heartless poachers who might want to take them for trophies. Tarangire National Park in Tanzania also spotted a white giraffe calf within its boundaries in January of 2015, and while Tarangire has “[taken] care to ensure the giraffe was safe from poachers, Hirola has not announced any such security,” National Geographic reported.

“These rare white giraffes shocked many locals, including myself, but they also gave us renewed energy to protect and save our unique wildlife,” Abdullahi Ali, Founder of the Hirola Conservation Program, told Caters News Agency.

Giraffes were listed as “vulnerable” by the International Union for Conservation of Nature (IUCN) last year. The Washington Post reported, “an IUCN giraffe specialist group determined that the giraffe population declined to 97,562 in 2015, down from between 151,000 and 163,000 animals, according to a 1985 estimate.”

As exceptional as it is, there have been quite a few white animals spotted in the wild around the world recently. Earlier this year, a photographer in Wyoming photographed a white sage grouse, while just last month, a rare white moose was filmed in Sweeden. “White lions and white penguins have also been spotted with similar pigment conditions,” National Geographic reported.

Petition Watch: Obama Pressured To Help Save Giraffes From Extinction in Congo – Only 38 Remain

(EnviroNews World News) – A petition has been gathering steam online, imploring President Barack Obama to intervene in the all-out giraffe debacle, underway on the ground in the Democratic Republic of Congo (DRC). The petition titled, “Save the Last 38 Giraffes in Congo” has accrued nearly 24,000 signatures…