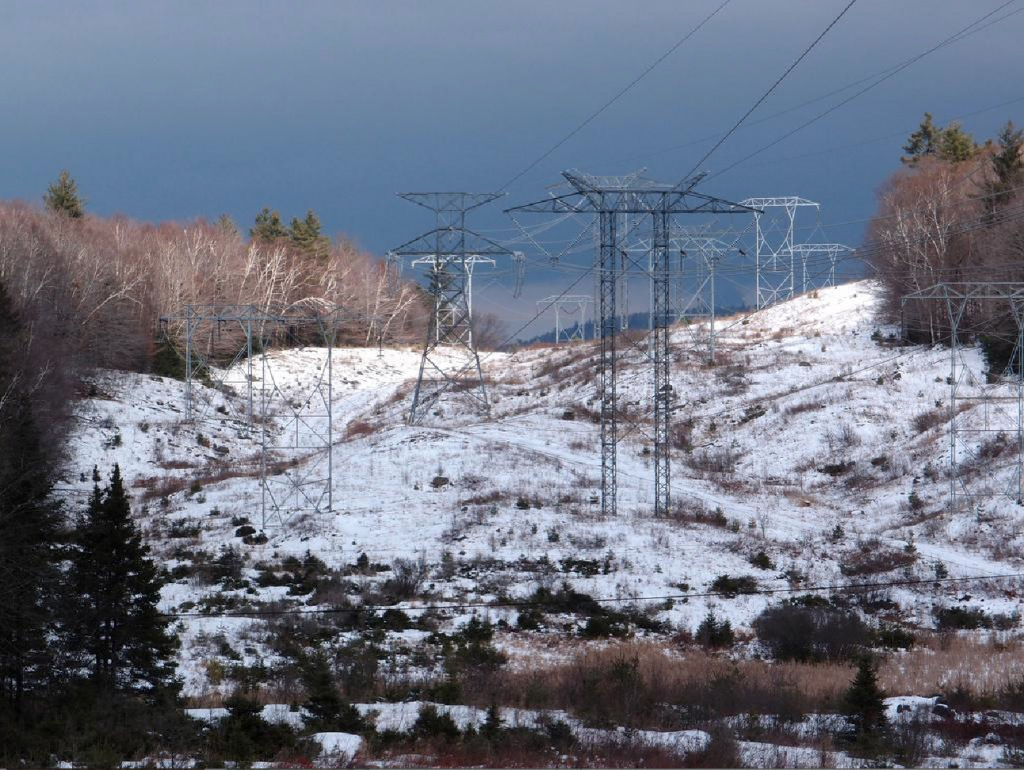 (EnviroNews DC News Bureau) — In a move Governor Chris Sununu (R-NH) said left him “stunned,” on February 1, 2017, the New Hampshire Site Evaluation Committee (the Committee) cut short 12 days of planned deliberations and voted unanimously to deny certification for the proposed Northern Pass transmission line. The ruling stops a controversial $1.6 billion project in its tracks, though both sides have vowed to continue the fight.

Eversource Energy, one of the two partners in the project alongside Hydro-Quebec, said it was “shocked and outraged” by the decision. In a statement issued hours after the ruling, the company, which has already spent $250 million on fees, engineering and property, said, “Clearly, the [Committee] process is broken and this decision sends a chilling message to any energy project contemplating development in the Granite State. We will be seeking reconsideration of the [Committee’s] decision, as well as reviewing all options for moving this critical clean energy project forward.”

To give its approval, the Committee had to find that the project would not unduly interfere with the development of the region; that it would not have “unreasonable adverse effects” on aesthetics, historic sites, air and water quality, the natural environment, and public health and safety; and that it would serve the public interest.

“In identifying the multiple reasons behind their conclusion, the subcommittee members discussed exactly the right issues: undue interference with land use, property values and tourism, and inadequate outreach to communities,” said Jack Savage, Vice President for Communications and Outreach at the Society for the Protection of New Hampshire Forests (Forest Society).

When first proposed in 2010, the transmission line was all slated to be aboveground. The project ran into immediate resistance from residents who feared declining property values and negative impacts on tourism. Three years later, Eversource proposed a new route, with just eight underground miles in the northwest corner of the state where opposition was most intense.

That proposition still left a long stretch of giant steel towers to be cut through the White Mountain National Forest — the scenic and economic gem of New Hampshire. The 800,000-acre woodland is home to Mount Washington and 160 miles of the Appalachian Trail. More than five million people come to hike, ski, fish and view the area’s landscape and wildlife each year.

In response to continued opposition, Eversource announced another revised route in 2015, this time proposing to bury an additional 52 miles of transmission line through the national forest. The remaining 132 miles would stay above ground, with more than 1,200 electric transmission structures, some as tall as 145 feet, meandering south from the international border.

The project had already received most of the federal, Canadian and state permits it needed to proceed. Massachusetts agreed to buy all of the 1,090 megawatts the line could provide for 20 years, securing financial stability. But in order for that to all happen, the project had to cut through New Hampshire, which sits directly atop Massachusetts on the map. The Forest Society said the Granite State was being treated as “merely an extension cord.” The Site Evaluation Committee was the last key hurdle, and Eversource was so confident the Committee would give the go-ahead that it even began recruiting workers ahead of the ruling. But the company greatly underestimated local opposition.

“This project is hugely unpopular in New Hampshire,” said Melissa Birchard, a staff attorney with the Conservation Law Foundation (CLF) in Concord, New Hampshire. CLF has been fighting the project since its inception. Of 31 towns along the route, 22 have expressed strong opposition, she noted, and 95 percent of 4,500-plus comments received by the Committee argued against Northern Pass.

“The transmission line as proposed goes through three of our forest reservations and two and a half dozen other conservation easements,” said Savage. He also cited the adverse impact construction would have on wetlands along the route as an area of environmental concern.

The Appalachian Mountain Club is another leading organization opposed to Northern Pass as proposed, warning of its potentially unfavorable effects on New Hampshire’s scenic landscapes, tourism and recreation. Another group, the National Trust for Historic Preservation, said on its website, “The proposed Northern Pass project cuts through areas of the state that include nationally significant places and landscapes.” But it’s not just enviro groups or NIMBYs that have objected.

A petition signed by 87 local businesses called for burial of the full 192-mile line, stating, “We believe the adverse impacts of towers and transmission lines, including property value impacts, scenic impacts, and wetlands impacts, are such that the current Northern Pass proposal should not be permitted by the Site Evaluation Committee.”

Andy Smith, of Peabody & Smith Realty, is one of those business owners who signed the petition. He’s already seen properties in the path of Northern Pass sell at 30 to 50 percent below market value. “Prospective buyers along the route of the overhead towers have voted with their pocketbooks,” he said. “We are a scenic state, that’s what we thrive on, the scenery and the ruralness.”

With so much opposition, how did the project get this far? (HINT: Follow the money)The flow of money starts at the headwaters of Hydro-Quebec. From James Bay through the lakes and rivers of the Province of Quebec, its dams and reservoirs can produce 36,908 megawatts of electricity — far more power than it can sell. According to the company’s 2016 annual report, an average of 11.3 terawatt-hours of excess capacity will be available each year for the next 10 years.

To turn that extra energy into revenue, Hydro-Quebec set out to attract extreme consumers of electricity, such as data centers, to the region. They’ve also gone after bitcoin miners.

The so-called “cryptocurrency,” often used for drug smuggling, money laundering, sex trafficking and other black-market transactions, uses armies of computers to “mine” tokens by solving math problems. The Guardian described it as “a competition to waste the most electricity possible by doing pointless arithmetic quintillions of times a second.” Christine Lagarde, the head of the International Monetary Fund (IMF), warned that bitcoin mining would consume as much electricity as all of Argentina this year.

What electricity Hydro-Quebec can’t get data centers and bitcoin miners to burn up, it wants to send south — and Massachusetts provided a sizable, ready and willing market with a 2016 state law requiring utilities to contract for 1,200 megawatts of renewable energy capacity. A request for proposals (RFP) was issued by the Commonwealth of Massachusetts on March 31, 2017, which drew 46 bids.

Although it was not the lowest bid, Eversource Energy’s Northern Pass proposal was the sole bid selected. That drew the attention of Massachusetts Attorney General Maura Healey. Eversource, along with the state’s other big utilities, Unitil and National Grid, helped draft the RFP and were involved in the selection process.

Eversource Energy, with a market capitalization of more than $20 billion, serves 3.5 million customers in Connecticut, Massachusetts and New Hampshire. Its 2016 revenues came in at $7.6 billion. Hydro-Quebec, established and owned by the Government of Quebec, operates 62 power-generating stations and is the world’s fourth largest hydroelectric producer. It also generates big dollars: Approximately $10.8 billion (USD) over the 2016 fiscal year.

While hydropower is often lumped in with solar and wind energy, there have been many questions as to how “green” this project would really be.

According to the Appalachian Mountain Club, supplying this much power would mean diverting large rivers and flooding an area in Quebec equal to half the size of New Hampshire. Ancestral lands of the Innu Nation provide almost one-third of Hydro-Quebec’s waterpower, reported the Boston Globe. The Pessamit band fear further degradation of the Bersimis River, which could lead to reduced salmon populations and flooding that could harm caribou and beaver. But the project would bring ”green” dollars to Hydro-Quebec: the Massachusetts deal would have been its biggest contract ever, worth as much as $406 million (USD) annually for the next 20 years.

But the energy source was never the key issue for most opponents. Mainly, they want all 192 miles of the transmission line underground. “It could be buried,” explained Savage. “It’s technically feasible. They just don’t want to pay for it. Just to save money they’re asking New Hampshire towns and landowners to subsidize the project.” Birchard said that CLF would support a plan that emphasized local renewable resources or a combination of hydropower and wind or solar.

Having awarded a single contract to Northern Pass, Massachusetts will need to regroup in the wake of the Committee’s rejection. Eversource had promised the state to begin delivering electricity by the end of 2020, which would have required construction to begin this spring.

It’s unclear what Massachusetts’ next steps will be, but other serious proposals were on the table. These included a utility-scale offshore wind project submitted by Avangrid, a 1,000 megawatt underwater and underground transmission line through Lake Champlain and Vermont, and the Atlantic Link cable running undersea from New Brunswick, Canada to Plymouth, Massachusetts.

New Hampshire’s decision may have “stunned” Governor Sununu, who has been a supporter of Northern Pass all along, but it has prevented what realtor Andy Smith called a “huge scar” on the landscape.

In response to the Committee’s decision, Birchard sent this statement to EnviroNews: “Northern Pass has bullied its way through this process, and today’s decision says loud and clear that the people of New Hampshire won’t stand for it.”