Updates in the Case of the 'Mutilated' Manatee, Graffiti-Tagged With One Word: TRUMP - EnviroNews | The Environmental News Specialists
Skip to content 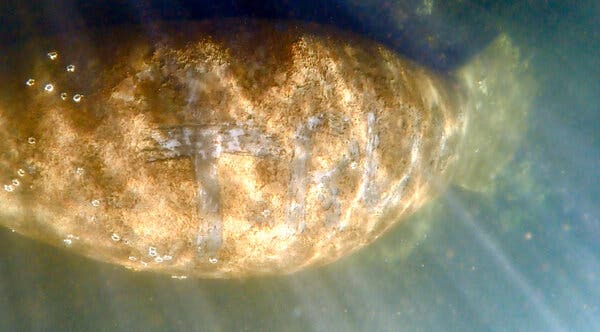 (EnviroNews USA Headline News Desk) — Citrus County, Florida— Manatees are peaceful. They don’t harm anyone. They don’t offend anyone. They certainly don’t care about politics. But days ago, someone discovered a West Indian manatee (Trichechus manatus latirostris) in Florida’s Homosassa River with one word written on the marine mammal’s body: “TRUMP.”

Today the U.S. Fish and Wildlife Service (USFWS) told EnviroNews that is has launched an investigation into the situation, but couldn’t be more specific because the investigation is ongoing.

At first, some thought the soon-to-be-former president’s name was carved into the manatee’s back. But USFWS said from its initial look at online photos and video of the graffitied mammal, it appears Trump’s name may have been written in algae.

But even that is illegal. Manatees are protected under the Endangered Species Act (ESA/the Act), the Marine Mammal Protection Act (MMPA), and Florida law, so like MC Hammer sings: Can’t Touch This.

It’s against the law to even make physical contact with a manatee. The person who tried to make a political statement on the sea creature could spend a year in prison and face a $50,000 fine.

USFWS, working with Florida officials, is looking into this further and trying to determine if the manatee was injured. “West Indian manatees are essential members of the ecosystems in which they inhabit,” said Aurelia Skipwith, Director of the USFWS.

As word of the defaced manatee got out, Twitter lit up with anger.

I just need to say something: why the fuck would you hurt a manatee.

Trump’s cult will rival that of Nazis in their cruelty, its a like guerrilla warfare on all sentient beings. The cruelty is the point, he has united every idiot in our nation and they will vandalize in his name for years to come. If I find who did that to the Manatee, god help u.

Something about Trump just brings out cruelty in people. https://t.co/YPG1GJLk4K

Former Florida Governor Jeb Bush even Tweeted about the manatee mistreatment — sharing an opinion piece written by columnist Dave Barry called, “The One Thing Floridian’s Agrees on: Don’t Mess with Our Manatees.”

Dave is correct. As Governor, I stated that the manatee was my favorite mammal. I was criticized since humans should be a governor’s top mammal. Watching what goes on in DC these days, makes me wonder. Long live the manatee! https://t.co/3JZnliY6aq

And if you know the identity of the manatee molester and would like to step forward, be a good Samaritan and do the right thing, the Center for Biological Diversity (the Center) will pay you $5,000. The nonprofit group is offering the money as a reward for information, leading to the culprit’s conviction.

“Manatees aren’t billboards, and people shouldn’t be messing with these sensitive and imperiled animals for any reason,” said Jaclyn Lopez, Florida Director at the Center. “However this political graffiti was put on this manatee, it’s a crime to interfere with these creatures.”

Manatees are peace-loving mammals. They float around slowly and eat plants. They don’t even have any natural enemies. Some experts call them “gentle giants” or “sea cows.”

Boat strikes are one of the biggest dangers to manatees, which are currently designated as a threatened species.

If you know who etched the political statement on this manatee, then this USFWS Tweet is for you:

If you have any information regarding this case or any wildlife crime, please call our wildlife crime tips hotline at 1-844-397-8477 or email us at [email protected] Thank you for supporting wildlife conservation!