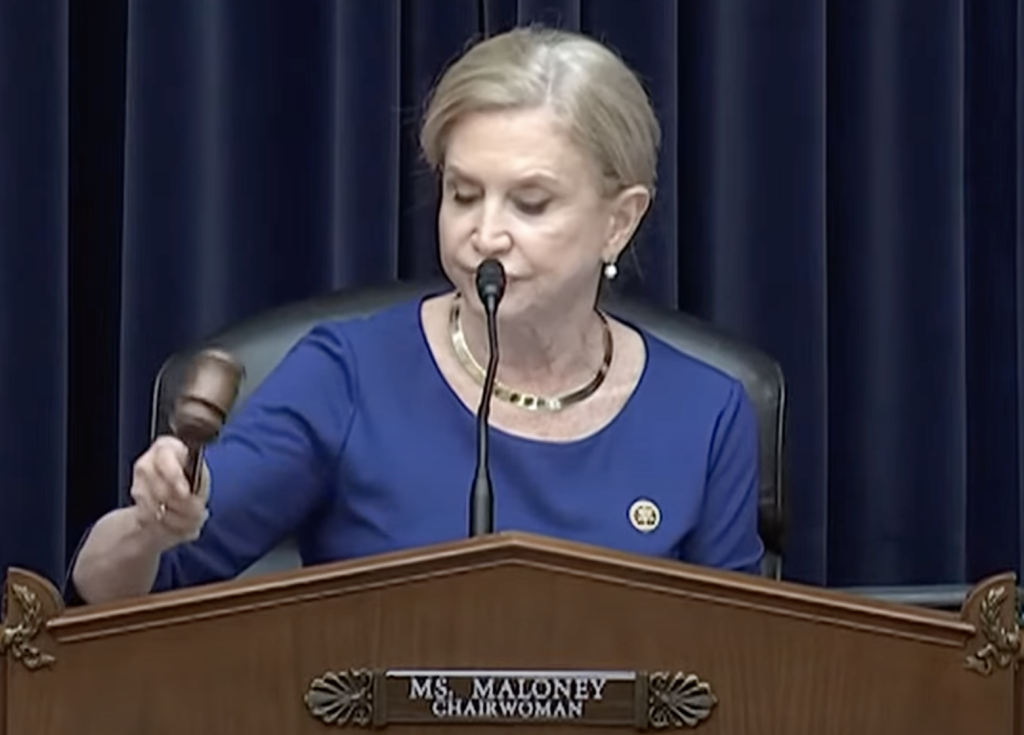 (EnviroNews DC News Bureau) — The CEOs from transnational oil Goliaths Exxon, Chevron, BP and Shell, alongside the President of the American Petroleum Institute (API), were grilled and hammered in a landmark meeting in the House Oversight Committee (the Committee) on October 28, 2021. Democrats compared their actions to those of the “tobacco industry” and accused the oilmen of perpetrating a continuous “disinformation campaign” to “greenwash” the public and thwart efforts to mitigate anthropogenic climate change. The meeting is the first of its kind and came just hours ahead of the U.N. COP26 climate summit in Scotland where President Joe Biden is in attendance.

“The industry ran a coordinated campaign to mislead the public, hide the dangers of its own product, and derail global efforts to reduce greenhouse gas emissions. At the same time, they were lining their own pockets,” said Committee Chair Carolyn Maloney (D) of New York’s 12th Congressional District in her opening remarks. “The American people lost more than 30 years, when we could have curbed climate change. Today, we face stronger hurricanes, dangerous wildfires and dangerous floods.”

Chair Maloney went after Exxon directly, after one of its lobbyists was caught on tape admitting the company’s climate campaigns were a false advertising front. “Earlier this year, a senior lobbyist at Exxon admitted the truth,” she scolded.  “He was caught on video saying that Exxon’s support for a carbon tax was merely a ‘talking point which would never become reality.'”

ExxonMobil CEO Darren Woods tried to defend the company, saying Exxon “has long acknowledged the reality and risks of climate change, and it has devoted significant resources to addressing those risks.” But Democrats were having none of it and piled on in a barrage of scathing rebukes.

Rep. Ro Khanna (D) of California’s 17th District held the panel’s feet to the fire over their continued support of the American Petroleum Institute — a fossil fuel trade organization that spends tens of millions running ads and lobbying members of Congress. “Will each of you [CEOs here] commit to leaving the API if they continue to lobby against electric vehicles? Will any of you commit to leaving them if they’re lobbying against electric vehicles?”

Khanna presented the opportunity (and strongly urged) any of the CEOs to directly tell the President of API, Mike Sommers, also present on the panel, to “knock it off” in regards to its anti-EV and methane lobbying campaigns. “[Sommers is] sitting right next to you on the virtual screen… Will each of you commit to leaving API if they continue to lobby against electric vehicles?.. You could tell them to knock it off for the sake of the planet… Would any of you take the opportunity to look at API and say ‘stop it?'” But it was crickets from the chorus of oil CEOs on that point.

“You can either come clean, admit your misrepresentations and ongoing inconsistencies and stop supporting climate disinformation, or you can sit there in front of the American public, and lie under oath,” Khanna rebuked.

Rep. Jim Jordan tried to push back for Republicans on behalf of Big Oil, and commended Chevron for being the only one of the oil giants present saying it will increase production in the coming years. “I’ll tell you what’s frustrating is a member of Congress telling American oil and gas companies to reduce production, at the same time the President of the United States is begging OPEC to increase production,” Jordan said. “That might be the dumbest thing I’ve ever heard… God bless Chevron for saying they’re going to increase production.”

“I think it’s been shameful how the other side wants to demonize this oil and gas industry,” said Rep. Bob Gibbs (R) of Ohio’s 7th District.  “I’m very proud of our oil and gas industry. They’re innovators, they drop new technologies, they provide a higher standard of living and lots of jobs and economic activity throughout our country.”

Representative Rashida Tlaib (D-MI) lambasted the CEOs for hiding behind front groups and subsidiaries in their lobbying and ad campaigns, thereafter putting Chevon CEO Michael Wirth on the spot for damages the company’s operations have caused to indigenous communities worldwide. “When are you going to cut the check?” she said. “When are you going to cut the 50 billion dollar check that you owe? It went through the courts. You owe 50 billion dollars to communities in 31 countries,” Tlaib continued. Wirth played possum and acted as if he didn’t know what Tlaib was talking about at all. “I’d be happy to look at your source for this information,” he said.

After that dramatic exchange, Ranking Member James Comer (R) of Kentucky tried to interrupt the hearing with a point of order and was shutdown by Chair Maloney, who then turned it over to Rep. Clay Higgins from Louisiana (R). “My, my, my. Good Lord help us to be protected from this threat from within,” Higgins exclaimed. “American patriots are so done with career politicians and Democrat party socialist insanity. We are nauseated by the continuous attacks on working Americans and American industry… You’ve gone a bridge too far and we won’t take it anymore,” he exclaimed in a heated tone.

A dramatic highlight occurred when Rep. Katie Porter (D) of California grilled the panel using M&M’s and bags of rice to make her point on the industry’s spending practices and how many federal leases the industry has taken that are currently undeveloped.  Sommers tried to push back by suggesting Porter didn’t comprehend the issue, saying, “I think you have a fundamental misunderstanding as to how this process works,” whereafter Rep. Porter cut him off with, “Reclaiming my time.”

“Mr. Sommers, there are 7,700 permits unused,” Porter continued. Appearing remotely from within her garage, and after making the point that 13.9 million acres of federal land are currently leased but not being developed, an aid popped the hatch on the back of her vehicle where multiple large bags of rice were stacked. “To visualize how much land that is, if each grain of rice were one acre, that would be 479 pounds of rice.”

Porter then asked the CEOs one by one if they “support a pause” on new federal oil and gas leases. As soon as each CEO began to waffle, she would interrupt them and log their answer as a “no” (only Woods of Exxon answered with a straight “no”). Porter continued:

You already have 13.9 million acres. This is equivalent to Maryland and New Jersey combined. How much more do you need? You have two of our 50 states at a price that makes the Louisiana Purchase look like a ripoff, and you’re not even using it… Our public land belongs to the American people, not Big Oil.

And finally, the 32-year-old congresswoman the right wing media loves to hate, the infamous “AOC,” a.k.a. Rep. Alexandria Ocasio-Cortez (D-NY), had her turn. “I think one thing that often gets lost in these conversations is that some of us have to actually live [in] the future that you all are setting on fire for us,” she said. “We do not have the privilege or the luxury of lobbyist spin.”

In closing the hearing, Chair Maloney blasted the executives for attempting to hoodwink the Committee by providing only materials already available to the public and for failing to hand over internal documents and board resolutions showing how much money the entities have spent to prop up climate denying “shadow groups.” Maloney then announced she would be filing formal subpoenas to obtain those records and ended the hearing with this:

I have tried very hard to obtain this information voluntarily, but the oil companies employ the same tactics [they’ve] used for decades on climate policy: delay and obstruction. Well, that ends today. I am formally notifying the ranking member and members of the Committee that I intend to issue subpoenas to the fossil fuel entities represented here today. I have draft subpoenas here. Please know that I do not take this step lightly. When Republican Dan Burton was chairman of this committee, he issued more than 1,000 subpoenas without a single complaint from my Republican colleagues.  I have been much more selective, but we are at code red for climate, and I am committed to doing everything I can to help rescue this planet and save it for our children.  We need to get to the bottom of the oil industry’s disinformation campaign, and with these subpoenas, we will.

But before she could gavel out the hearing, Ranking Member Comer attempted to come to the oil industry’s rescue by calling for another point of order, saying, “[I] just wanted to publicly say I object to the issuance of subpoenas. The oil and gas executives here today have provided over 100,000 pages of documents and we feel like that is an infringement on their First Amendment rights.” Maloney fired back.

“Well, Mr. Chairman, they produced documents, but they were not the documents that we requested,” she responded. Comer continued his objections, saying, “We strongly reiterate that this is an infringement on their First Amendments rights.” “Great,” replied Maloney. And with that, she passed around the draft subpoenas and gaveled out the meeting.