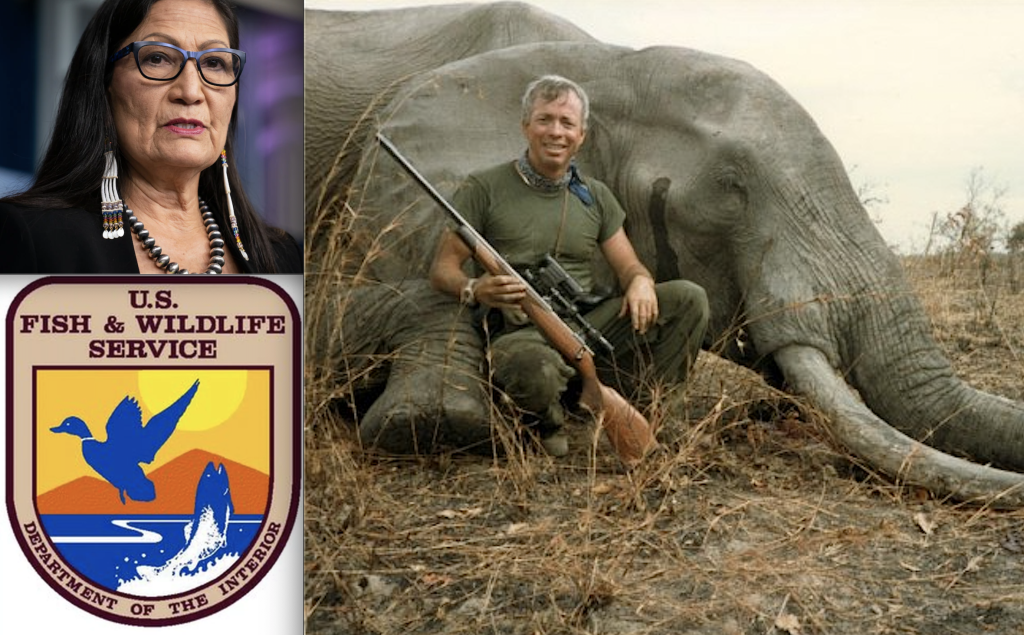 (EnviroNews Nature) — Washington D.C. — Animal welfare groups and conservation activists are taking issue with a recent decision by the U.S. Fish and Wildlife Service (USFWS) to issue permits to hunters wanting to import elephant hunting trophies into the United States from the African countries of Zimbabwe and Namibia. The Center for Biological Diversity (the Center) brought the issue to light in early March when the NGO urged the USFWS to deny the permits. In a move that underscores the agency’s apparent reluctance to publicize its decision, the issuance of the endangered elephant permits was only confirmed in a partially redacted response to the Center.

In an effort to gain more clarity, EnviroNews chased this down further with high-ranking Interior Department press officers in a back-and-forth dialog that lasted days. While USFWS ultimately provided some answers, the agency stonewalled on multiple key points, raising even more questions (more on that below).

The elephant trophy permitting issue had become further complicated in 2019 when hunters from the Dallas Safari Club sued the USFWS, alleging the Trump Administration was legally out of bounds by “no longer processing elephant import permit applications for any country.”

The Biden Administration settled the case in 2021, but had to agree to deadlines for granting or denying the pending permit applications. The first such deadline came up this past March 16 on the eight applications for elephant trophy imports from Namibia and Zimbabwe.

“Yes, we made decisions on the eight permit applications and satisfied the terms of the settlement agreement,” Acting Manager Mary Cogliano of the USWFS’ Division of Management Authority told the Center by email on March 18. “We issued six permits and denied two permit requests.”

The Center’s International Legal Director Tanya Sanerib quickly responded with a statement deriding the agency’s decision to grant the six permits. She wrote:

The Biden Administration’s elephant decisions are a blow and frankly inappropriate during an extinction crisis… Greenlighting imports of hunting trophies from imperiled animals like elephants sends a terrible signal. Now’s the time to transform our relationship with nature, not fall back on colonial paradigms that exploit wildlife. We have to do better to stop the tide of extinction.

The country of Namibia has recently come under fire for the international sale and export of 22 wild African elephants (Loxodonta africana). Zimbabwe has also received global condemnation in the past year for selling hunting rights for up to 500 elephants.

Other wildlife organizations say the threat to elephants is also a threat to the environment, with the World Wildlife Fund (WWF) writing:

Savanna elephants contribute to the maintenance of the savannas and open woodlands by reducing tree densities. Without them, many other plants and animals would not survive in the woodland areas.

The WWF reported in 2018 that there were just 415,000 elephants left across Africa, down from as many as 10 million in 1930. The International Union for Conservation of Nature and Natural Resources (IUCN) has the African savannah elephant categorized as endangered on their latest IUCN Red List of Threatened Species (last assessed in November of 2020).

It is impossible to imagine a policy more dangerous to elephants than one that drives demand for their parts by allowing these imports just to indulge trophy hunters seeking to hang a head on their wall. We count on our government to be a strong champion of elephants’ protection, not an enabler of pay-to-slay tourism that is driving them toward extinction.

The USFWS had previously ruled during the Obama era that it didn’t have enough data to permit such elephant trophy imports from Zimbabwe and Tanzania. The agency had no answer to EnviroNews’ question of what information had changed since then.

When queried by EnviroNews on how granting the trophy permits makes for good policy, the USWFS responded with a broad rationale about “well-regulated hunting:”

Legal, well-regulated hunting as part of a sound management program can benefit the conservation of certain species by providing incentives to local communities to conserve the species and by putting much-needed revenue back into conservation. To support conservation, hunters should choose to hunt only in countries where hunting is well-regulated and there are strong compliance and enforcement measures, sound management practices, and healthy wildlife populations.

EnviroNews followed up in direct fashion, asking USFWS this:

How much does green-lighting elephant trophy imports truly deter poachers on the other end, or empower communities to stop poaching themselves? Why not engage in a more direct fashion with funding, manpower or other means instead of condoning the killing of more elephants?

The USFWS was mum on this follow-up question. The idea that trophy hunting can help recover wildlife populations is controversial at best. The Humane Society of the United States published data in 2016 on how trophy hunting was pushing lions to the brink of extinction, for example.  Meanwhile, Teresa Telecky, a zoologist and the Vice President of Wildlife at the Humane Society International, recently told the New York Times, “There is no evidence that trophy hunting advances conservation of a species.”

The unnamed spokesperson from USFWS told EnviroNews, “Hunters should choose to hunt only in countries where hunting is well-regulated and there are strong compliance and enforcement measures, sound management practices, and healthy wildlife populations.” This answer only raised more questions, so EnviroNews pushed further, asking the agency if “hunters are going to adhere to [largely] unenforceable recommendations?” To that follow-up question, EnviroNews staff heard only crickets.

Such voluntary policy recalls the international outcry from 2015 when Dr. Walter James Palmer killed Cecil the Lion after illegally luring the Zimbabwean cat out of a park. The incident sparked one of the greatest wildlife-killing firestorms the world has ever seen, dominating headlines around the world and igniting multiple petitions that garnered millions of signers.

The USFWS spokesperson – who declined to stand behind their comments and be named for this article — further rationalized the permits by stating, “Career staff in the Service’s International Affairs program review and make data-driven, scientifically based determinations on permit requests to import trophies of species listed under the Endangered Species Act (ESA) and/or CITES (Convention on International Trade in Endangered Species).”

When queried on the specific justification for granting these particular permits, the spokesperson cited compliance with “positive enhancement findings” regarding a pair of obscure regulations, writing:

Regarding the recently issued and denied permits: The Fish and Wildlife Service has determined that the importation of each of the personally sport-hunted elephants subject to the applications for which the Service issued permits meets the requirements for making positive enhancement findings pursuant to 50 CFR 17.40(e) and 50 CFR 17.32(a). The Service has also denied applications where the requirements are not met.

Regarding permits for threatened or endangered wildlife, the latter of the two cited regulations states that, “Permits issued under this section must be for one of the following purposes: Scientific purposes, or the enhancement of propagation or survival, or economic hardship, or zoological exhibition, or educational purposes, or incidental taking, or special purposes consistent with the purposes of the [Endangered Species] Act.”

The agency’s granting of the six elephant trophy permits under this regulation would seem to fall under the nebulous “incidental taking” category. When pressed for further clarity on the matter of incidental take permits, the USWFS responded by saying, “We have nothing to add to our original response. Thanks.”

As a sidebar, EnviroNews also asked if issuing incidental take permits like these could present an image problem for the Department under Secretary of the Interior Deb Haaland – America’s first-ever Native American Presidential Cabinet member.

Haaland had multiple moments where she stuck up for imperiled wildlife when she was a member of Congress, leading the conservation and animal rights movements to hold high hopes for her when she took the Cabinet post.

THE PLIGHT OF THE MIGHTY AFRICAN ELEPHANT: A STORY OF TRAGEDY AND LOSS

The IUCN reported last year on how the number of African forest elephants (Loxodonta cyclotis) had plummeted by more than 86 percent over a period of 31 years, while its cousin, the African savanna elephant, saw its population decreased by 60 percent over the previous five decades. The organization noted “sharp declines since 2008” for both species “due to a significant increase in poaching.”

“For both species, poaching is still the biggest driver of decline,”  Kathleen Gobush, leader of the IUCN’s new assessments and a member of the NGO’s Elephant Specialist Group, told National Geographic. “These assessments hopefully will garner renewed attention for the world to double down on stopping the killing, trafficking, and demand for ivory.”

It was in last year’s update that the IUCN downgraded the status of the savannah elephants from vulnerable to endangered. “This is a signal to the United States and the international community that major resources must be put into curbing ivory poaching and trafficking, closing remaining domestic ivory markets, and saving these marvelous, irreplaceable engineers of the forest and savanna from extinction,” the Center for Biological Diversity’s Tanya Sanerib asserted at the time.