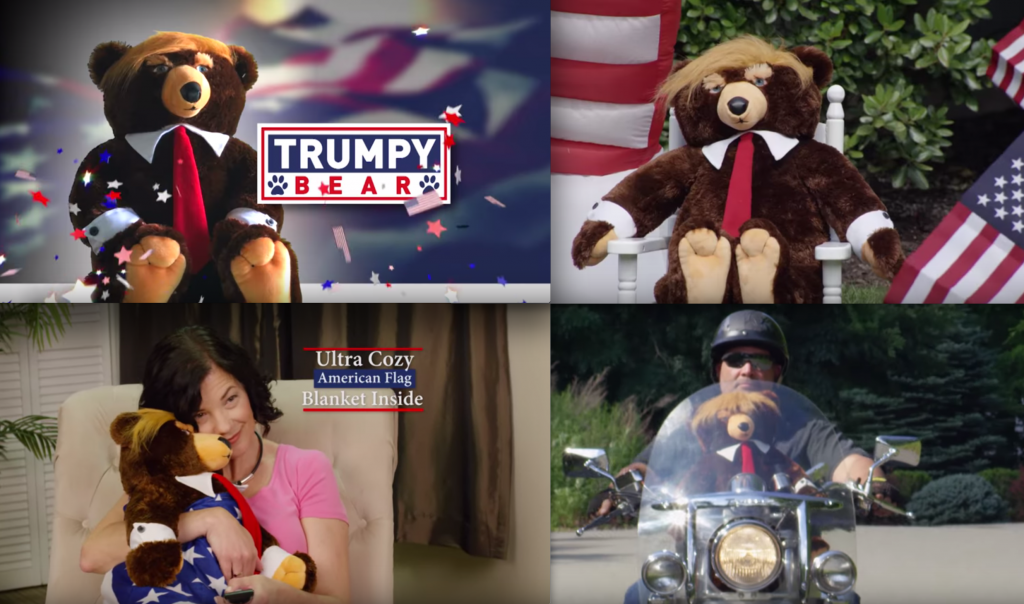 (EnviroNews USA Headline News Desk) — When members of the EnviroNews team showed the Trumpy Bear infomercial to people, nearly all thought it was a gag and started cracking up immediately. Several social media commenters have stated that at first, they thought it was a “Saturday Night Live skit.” But it’s not. It’s actually a very real product being marketed and sold in a full-throttle two-minute infomercial on nationwide TV.

And the sellers are deadly serious about it too. So serious in fact, that they selected a sales narrator with a voice so manly even James Earl Jones would be jealous. Set to bombastically orchestrated patriotic-sounding music behind trombones and brass, where you can almost see the WWII war planes flying and artillery exploding in the background, the narrator boldly but smoothly takes the viewer on a journey indeed. To commence the video, he patriotically states:

The wind whispered through the forest. A storm is coming. You cannot defeat the storm. From the trees rose a resounding voice. I fear nothing! I come when the trumpet sounds. I am the storm — the great American grizzly. Introducing: the original Trumpy Bear — the fearless super plush American grizzly.

Trumpy Bear is no ordinary teddy bear to be sure, he comes equipped with several highly useful amenities — features like a white collar, a long red tie, a comb-able orange hair muff, and best of all, a hidden zipper, that when opened, unleashes an amazingly cozy, stars-and-stripes, American flag blanket.

Possibly the most important thing to know about Trumpy Bear: He “was born June 14: Flag Day.” And let’s not forget it!

But besides the awesome Team America music and the super suave narrator, the best thing about this sales video has to be the testimonials — testimonials hailing Trumpy Bear as life’s ultimate companion. Hell, who needs a dog, when Trumpy Bear is man’s new best friend?

A macho motorcycle rider proudly states, “I’m a former Marine, and I’m proud to have Trumpy Bear ride by my side. Once a Marine, always a Marine!”

“Trumpy can even honor your own American heroes,” says the narrator as the video cuts to Trumpy Bear sitting on a home military alter with pictures of family members in the armed forces, alongside their medals and awards. “God bless America, and God bless Trumpy Bear,” an elderly lady asserts.

In another scene, Trumpy is cruising along in a golf cart. “Everyone knows Trump Bear loves to go to the golf course,” the actor states. “When I ride with Trumpy Bear, he makes my golf game great again. Thank you Trumpy Bear!”

One testimonial features an elderly but stern man, cuddling the Trumpy Bear, who says, “I am an Army vet, and I am proud to own the Trumpy Bear. And I will always be proud to be an American.” After all, what could be more American than cuddling with the Trumpy Bear?

So whether you’re a God-fearin’, gun-totin’, righter than right-wing American who would like to lead a Donald Trump fan club, or a tofu-eatin’, rainbow colors wearin’, left field lefty who needs the best white elephant gift ever, you can’t go wrong with Trumpy Bear. And best of all, as the infomercial clearly points out at the end: You can “order the super plush Trumpy Bear for only two payments of $19.95, and receive a special certificate of authenticity. Don’t miss out on owning a piece of American history.”

(EnviroNews World News) – There’s not a lot that can be said in the introduction to explain the contents of this absolutely hilarious animated commercial out of Japan, featuring mainstream media dominator and GOP presidential candidate Donald Trump – you just have to see it for yourself. The…

(EnviroNews World News) – An American bald eagle smacked Donald Trump upside the head in August of 2015 when he was prepping for a TIME Magazine cover story. To be clear, the eagle bashed him in the hair not once, but several times – real quick like -…