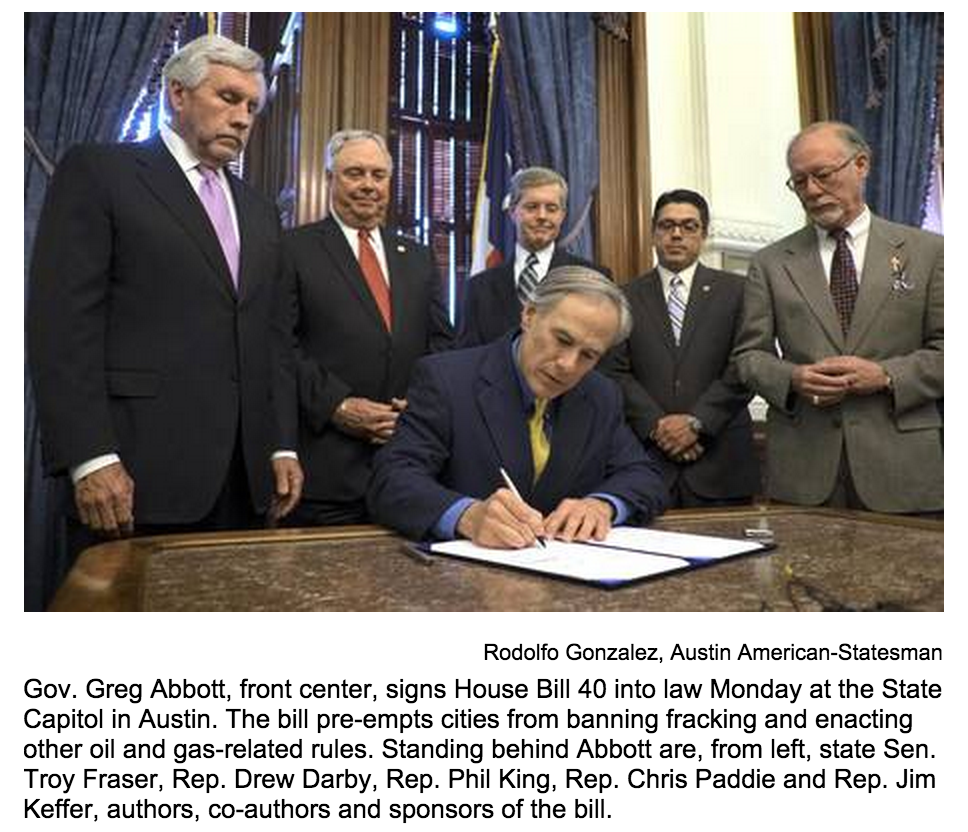 (EnviroNews World News) — Well, it’s happened again — this time in the Sooner State of Oklahoma. It would appear that big oil with its limitless financial lobby power is afraid — shaking in its boots at the prospect of local cities and municipalities saying “hell no” to fracking in their own backyards.

Saying “hell no!” — that’s exactly what happened earlier this year in Denton, Texas, which just so happens to be the birthplace of modern day fracking as we know it, when citizens of that town voted overwhelmingly to put and end to the controversial practice within city limits. Big Oil’s response?: Put the Koch Brother-bankrolled American Legislative Exchange Council, a.k.a. ALEC, on the case.

The nation had watched closely last year as little Denton’s proposed ban went to the people for a vote. When the people spoke, and voted overwhelmingly to ban fracking, it seemed to set off a fearful chain reaction within the powers that be — a panic that sprung them to immediate action.

When the fracking ban ban bill (no that’s not a typo) passed through the Texas’ legislature EcoWatch reported, “The Texas state legislature voted [on May 4, 2015] to ban fracking bans. Ever since the people of Denton, Texas voted to ban fracking last November, state lawmakers in cahoots with the oil and gas industry and the American Legislative Exchange Council, or ALEC, have attempted to strip municipalities like Denton of home rule authority to override the city’s ban.” This past week half-a-dozen protestors were hemmed up by Denton police while protesting the implementation of H.B. 40 — a bill that literally bans fracking bans.

Texas Republican Representative Phil King stood proudly around Governor Gregg Abbott at the gubernatorial signing of H.B. 40 last week. King just so happens to be one of three national chairs of ALEC, and was among the bill’s authors and sponsors.

Following the signing into law of HB 40, it didn’t take long for activists to start chaining themselves to the entrances of local fracking wells. While the whole charade surrounding Texas’ ban on fracking bans is infuriating to many Texans and American citizens alike, believe it or not, this type of power-grab — originating at the state level and usurping local authority — is happening in states all around the country.

SB 809 “reaffirms the Oklahoma Corporation Commission as the primary regulator of oil and gas drilling, [and prohibits] cities from enacting drilling bans. It allows ‘reasonable’ restrictions for setbacks, noise, traffic issues and fencing,” the Bartlesville Examiner-Enterprise reported on May 31.

In Ohio, communities have been hammered by the sometimes devastating and haphazard activities of oil and gas operators. From horrible spills, to fracking wastewater earthquakes — waste-dumping crimes, and pollution of air and water, Ohioans have been frequently left in the wake of gas industry plunder.

Because of this, several municipalities were on their way to implementing local rules that would have implemented more control over certain oil and gas activities, including fracking — a move that eventually landed multiple parties in court — and all the way to the state supreme court. In the end, local townships, environmental groups, and your ordinary citizen alike were shot down in a narrow 4-3 ruling wherein the court ruled that the Ohio constitution “does not allow a municipality to discriminate against, unfairly impede, or obstruct oil and gas activities.”

Justice Bill O’Neill put some members of the court on blast with his written remarks, strongly rebuking justices who have taken money from the oil industry:

Let’s be clear here, what the drilling industry has bought and paid for in campaign contributions they shall receive. The oil and gas industry has gotten its way, and local control of drilling-location decisions has been unceremoniously taken away from the citizens of Ohio.

The author of the opinion, Justice [Judith] French, received tens of thousands of dollars in campaign contributions from fracking companies last year. One company that is currently fracking in Ohio, Diversified Resources, gave her campaign $3,500, and American Energy gave her nearly $2,000. Kimble Company, a manufacturer of fracking equipment, chipped in $4,100. Energy utility companies gave her campaign much more. Both Murray Energy and First Energy gave Justice French’s campaign over $10,000. American Electric Powers and its political action committee gave even more than that.

The law firm that represented the plaintiff, Beck Energy, gave Justice French’s campaign $7,695, and the firm who filed a brief on behalf of the American Petroleum Institute and others gave more than twice that amount.

Despite major concerns over a conflict of interest for Justice French, with an extraordinarily weak recusal law in Ohio, she is likely in the clear, and at the end of the day, Ohio cities, towns and counties lost the ability to set their own rules for oil and gas within their boundaries in one swift stroke.

The situations in Oklahoma and Ohio might seem bad enough to some people, but in Idaho, they have taken it a step further. They’ve wiped out the ability for local towns and counties to control even the minuscule oil and gas items listed above in the Oklahoma bill, with one sweeping piece of legislation — House Bill 464. The Gem State, as it is commonly known, is getting its first taste of oil and gas development after finally making it through a negotiated rule making period and implementing an “Oil and Gas Conservation Commission” to regulate operator activities. But one year earlier in Idaho’s 2014 session, while an operator named Alta Mesa Idaho was out punching wildcat wells, HB 464 was rammed through the legislature, and this bill dealt with the issue of local drilling or fracking bans before Idaho was even up and running with oil and gas operations.

No ordinance, resolution, requirement or standard of a city, county or political subdivision, except a state agency with authority, shall actually or operationally prohibit the extraction of oil and gas.

No ordinance, resolution, requirement or standard of a city, county or political subdivision, except a state agency with authority, shall actually or operationally prohibit construction or operation of facilities and infrastructure needed for the post-extraction processing and transport of gas and oil.

That language seems a bit knee-jerk considering that in most places no ban on fracking or drilling bans yet exists, and rules governing setbacks, fencing, traffic and infrastructure issues are traditionally voted on and implemented by city councils, county commissions, or planning and zoning commissions. Members of the Idaho Oil and Gas Conservation Commission said repeatedly throughout the rule-making period that they were only using things that are already in place in other states as guideposts in their process.

Other suspiciously unique elements were also codified into law in Idaho’s legislative session this year in regards to key property rights issues and how a landowner can actually be forced into participating with drilling and fracking activities weather they want to or not. Idaho’s 55% forced-pooling laws had tea-partiers and liberals alike boiling over what they see as a violation of their inherent constitutional rights.

Residents Furious About Being Force-Pooled Into Idaho’s First Fracking

In another explosive situation in Payette County, Idaho’s primary target zone for oil and gas development, commissioners repeatedly deferred to the state, saying they were glad to see the state take over, and saying that if they didn’t allow certain gas infrastructure to be built, the state would just make them do it anyway.

At one of the most divided and hotly contested meetings in the county’s history, citizens fought with Alta Mesa Idaho attorneys and “paid and imported minions” in front of the Payette Commissioners until after midnight, over whether or not to allow a rail transportation and processing plant, a.k.a. “bomb train station” to be built right next door to legendary dog trainer Pete Eromenok’s house and kennels.

After putting over the epic “bomb train station” decision, to a hail of accusations of corruption and bribery since all three commissioners had leased their rights to the applicant Alta Mesa Idaho, they voted unanimously to shoot down the appeals and allow for the plant to be built.

Amidst Accusations of Bribery, Corruption, Payette Commissioners Sign off on Natural Gas Plant

NEW YORK, PENNSYLVANIA, AND COLORADO TAKE THE OPPOSITE PATH

While most of the states taking this type of ban on bans approach are either red or swing, in several blue states they have taken a different approach. In one way shape of form, New York, Pennsylvania, and Colorado have all voted or ruled that municipalities can regulate oil and gas within their boundaries. These were all blue states of course.

With the seeming rush by states to preemptively seize local power and ban communities from implementing their own oil and gas rules or bans, we are left to wait and watch if more model bills, like the one crafted by ALEC for Texas, will start springing up around the country in red oil producing states.