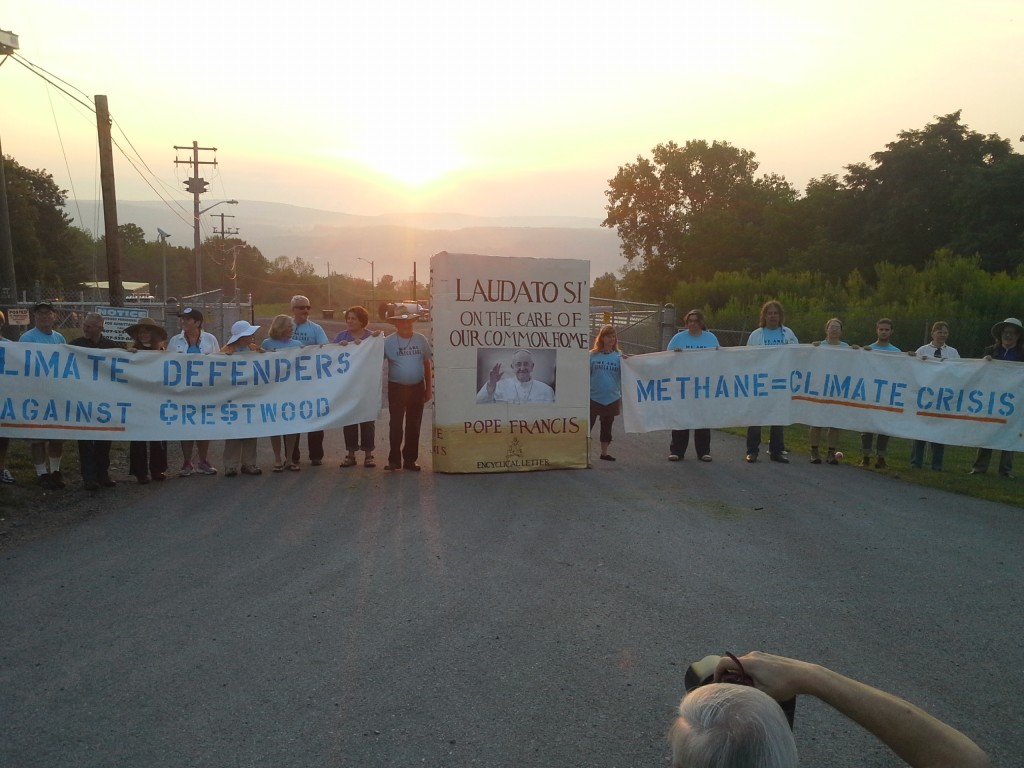 (EnviroNews New York) — Watkins Glen, New York — Over the past several months, protests have been fierce surrounding the already-approved expansion of an underground, unlined, salt-cavern, methane storage facility under the shores of New York’s Seneca Lake. Those direct-action campaigns continued on Tuesday August 18, 2015, as 19 protestors, including grandparents, were charged with trespassing and hauled off in the paddy wagon by local Schuyler County deputies.


This is certainly not the first time determined activists have been detained for their uprising over the storage plan. Incredibly, Monday’s event brought the grand total of arrestees to 359 since the actions began — a number that locals note is now higher than the widely-acknowledged 350-ppm CO2 threshold for a stable climate.

Though the go-ahead was given to Crestwood Midstream in October of 2014 to break ground on the project, the company has not done so as of yet. Following the green light from the Federal Energy Regulatory Commission (FERC) last fall, “there was nothing left for [protestors] to do but put their bodies on the line,” Lindsay Speer, Director of Creating Change told EnviroNews New York.

The group “We Are Seneca Lake” with its “Seneca Lake Defenders” were on the scene, where a group of 19 formed a human-chain that blocked the entrance to Crestwood Midstream’s entrance on Route 14 in what they called “a peaceful act of civil disobedience.”

We Are Seneca Lake said in a statement that none of the 19 hemmed up this time around had been arrested previously in any Seneca protests, suggesting the number of people willing to put their safety and freedom on the line to stop the project is on the rise.


Many of the demonstrators were reportedly Catholic, and read from Pope Francis’ recently released “climate encyclical” as they blocked the path into Crestwood’s entrance. Video footage of the ensuing arrests, was captured by bystanders.


The intense fight against this proposal gained even more attention earlier this year when Josh Fox, filmmaker of the legendary HBO Gasland films, turned out and added his own name to the running tally of arrestees — people all forced to spend a little time in the crowbar-motel on behalf of Crestwood’s ploy.

In May, Fox released another nat-gas film focused exclusively on the Seneca Lake situation, wherein the filmmaker shines light on FERC for its hasty “rubber stamp” method of approval for pipelines and other applications for national infrastructure facilities, like the one already approved for Crestwood at the Seneca site.

Fox in his short film, reminds viewers of a catastrophe from back in November of 1980 at Lake Peigneur in Lousisana, where an oil company drilled a well into a salt mine underneath the lake. The disaster that ensued was one for the record books, after the drill-rig collapsed and 1.5 billion gallons of water rushed down into the borehole like water draining out of a bathtub — emptying the entire lake and swallowing up the rig and other boats in the process.

In addition to the FERC-regulated natural gas permit being protested by We Are Seneca Lake, Crestwood also has a separate plan to store an additional 88 million gallons of liquid petroleum gas (LPG) on the same site, under the beaches of Seneca — a plot outraged locals say poses a huge risk to the lake, which provides drinking water to over 100,000 people, while increasing the risk for an explosion.

Seneca is the largest in the glacial Finger Lakes group of 11, and is called the “lake trout capital of the world.” In addition to providing potable h2o for tens of thousands of people, it also provides agricultural water for an array of crops including wine grapes.

Reports from the ground informed EnviroNews New York the arrests occurred around 7:15 am EST this morning, and that all 19 protestors had been freed from jail in quick fashion by 7:55 am.

We Are Seneca Lake published a press release detailing the events of protest, and the corresponding arrests. The release honors all 19 arrested by name, and shows that with the exception of a 28-year-old and four people in their forties, all the other protestors were in their fifties, sixties, and seventies.

The fact these demonstrators were not youngsters, rather older and established members of the community, reinforces a rising trend that we have been watching at EnviroNews — a movement where more and more grandmas and grandpas seem to be willing to get their skin in the game — quite literally and indeed physically.

The arrests of free-speech fracking activist grandmothers Vera Scroggins in Pennsylvania and Alma Hasse in Idaho have brought attention to this growing cohort of activists nationwide.

The press release from We Are Seneca Lake can be read below in its entirety.

Watkins Glen, NY – In a peaceful act of civil disobedience against proposed gas storage that highlighted the climate crisis, 19 people formed a human chain shortly after sunrise this morning at the north entrance of Crestwood Midstream on Route 14. They blocked two tanker trucks attempting to enter the facility. Among the blockaders were Tony Del Plato, famed chef and co-owner of the Moosewood Restaurant, and the Reverend Lesley Adams, retired chaplain of Hobart and William Smith Colleges and current resident of Schuyler County.

Schuyler County deputies arrested the 19 shortly after 7 a.m. as they read aloud from Pope Francis’ recent encyclical letter on climate change, “On Care for Our Common Home.” All were taken into custody, charged with trespassing, and released.

To illustrate the contribution of natural gas to global warming, blockaders held banners that said “Methane = Climate Crisis” and “Climate Defenders Against Crestwood.” A seven-foot replica of the Encyclical was also part of the blockade.

Today’s arrests bring the total number of arrests to 359 in the ten-month-old civil disobedience campaign.

Their recitation from the Pontifical document continued the reading that began on June 30 and has continued throughout the summer.

None of the protesters this morning had been previously arrested as part of the We Are Seneca Lake movement, which opposes Crestwood’s plans for gas storage in lakeside salt caverns and which has been ongoing since October 2014.

Moosewood co-owner and chef, Tony Del Plato, 67, said, “Scientists tell us that 350 parts per million is the upper limit for carbon dioxide if we want a stable climate for food production. We have far surpassed 350. That’s an S.O.S. signal. Today, we surpassed 350 arrests at the gates of Crestwood. That’s an S.O.S. signal, too. Crestwood’s plans to store massive amounts of leaky methane here is a threat to water, food, climate, and life itself.”

Earlier this month, the 19 owners of Ithaca’s famed Moosewood Restaurant joined a coalition of over 340 Finger Lakes businesses and municipalities in opposition to Crestwood.

Reverend Lesley Adams, 57, now a resident of Hector, in Schuyler County, said, “In the Episcopal church, we often end our service with the words, ‘Send us into the world to do the work you have given us to do, to love and serve.’ My work today is to resist Crestwood. I just don’t feel I can sit idly by while Crestwood fills unstable, unlined salt caverns under Seneca Lake with highly pressurized flammable material. If there are fiery explosions killing people or huge increases of salinity killing fish and plants, and I have not worked to prevent it, how will I be able to live with my conscience?”

Peter Arena, 50, of Interlaken in Seneca County said, “The plans of Crestwood Midstream to inject millions of cubic feet of pressurized, volatile gases beneath Seneca Lake are a direct threat to the well-being of myself and all that I love. I believe, as a man raised in the teachings of St. Francis, I have been entrusted to protect and steward this place where I am rooted. Standing here in the path of this industrialization and its consequent damages is my moral duty and obligation.”

Crestwood’s methane gas storage expansion project was approved by the Federal Energy Regulatory Commission last October in the face of broad public opposition and unresolved questions about geological instabilities, fault lines, and possible salinization of Seneca Lake, which serves as a source of drinking water for 100,000 people.

Those arrested today were:

Read more about the protesters at: https://www.wearesenecalake.com/seneca-lake-defendes/.

Background on the protests:

Protesters have been blocking the Crestwood gas storage facility gates since October 23rd, 2014. On October 29, Crestwood called the police and the first 10 protesters were arrested. More information and pictures of the actions are available at www.WeAreSenecaLake.com.

The unified We Are Seneca Lake protests started on October 23rd because Friday, October 24th marked the day that major new construction on the gas storage facility was authorized to begin. The ongoing acts of civil disobedience come after the community pursued every possible avenue to stop the project and after being thwarted by an unacceptable process and denial of science. The protests are taking place at the gates of the Crestwood compressor station site on the shore of Seneca Lake, the largest of New York’s Finger Lakes.

The methane gas storage expansion project is advancing in the face of broad public opposition and unresolved questions about geological instabilities, fault lines, and possible salinization of the lake, which serves as a source of drinking water for 100,000 people. Crestwood has indicated that it intends to make Seneca Lake the gas storage and transportation hub for the northeast, as part of the gas industry’s planned expansion of infrastructure across the region.

Note that the WE ARE SENECA LAKE protest is to stop the expansion of methane gas storage, a separate project from Crestwood’s proposed Liquefied Petroleum Gas (LPG) storage project, which is on hold pending a Department of Environmental Conservation Issues Conference held on February 12th, 2015.

As they have for a long time, the protesters are continuing to call on President Obama, U.S. Senators Schumer and Gillibrand, Governor Cuomo, and Congressman Reed to intervene on behalf of the community and halt the dangerous project. In spite of overwhelming opposition, grave geological and public health concerns, Crestwood has federal approval to move forward with plans to store highly pressurized, explosive gas in abandoned salt caverns on the west side of Seneca Lake. While the New York State Department of Environmental Conservation (DEC) has temporarily halted plans to stockpile propane and butane (LPG) in nearby caverns—out of ongoing concerns for safety, health, and the environment—Crestwood is actively constructing infrastructure for the storage of two billion cubic feet of methane (natural gas), with the blessing of the Federal Energy Regulatory Commission (FERC).

More background, including about the broad extent of the opposition from hundreds of wineries and more than a dozen local municipalities, is available on the We Are Seneca Lake website at https://www.wearesenecalake.com/press-kit/.