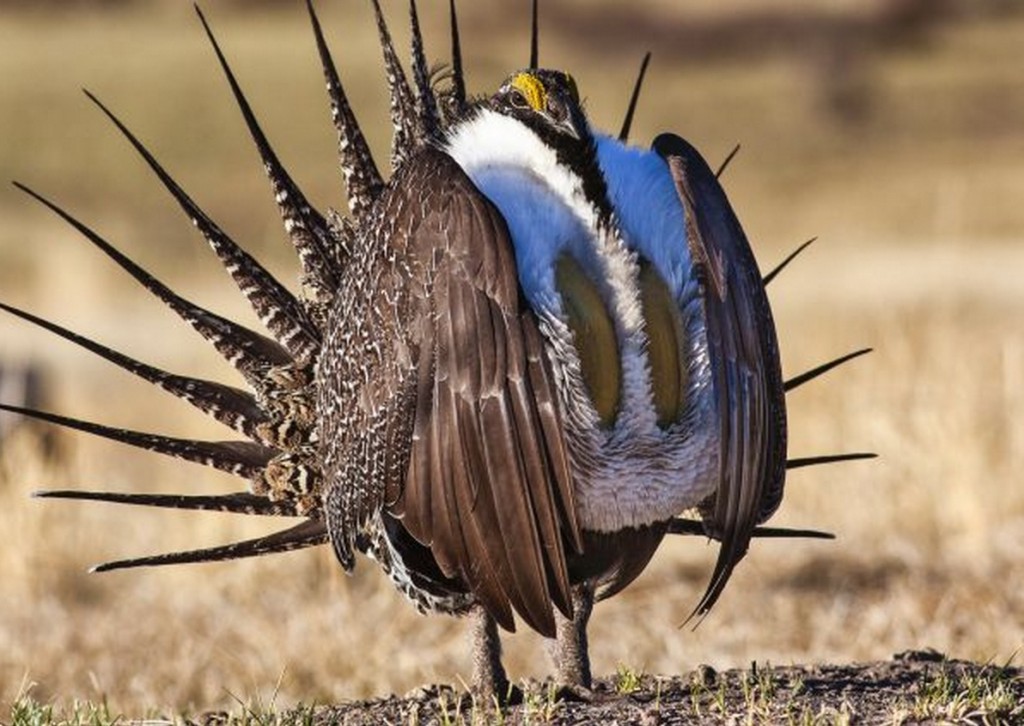 (EnviroNews Nevada) — Reno, Nevada — In a move that will likely anger and disappoint environmentalists, the bi-state sage grouse population in California and Nevada probably will not be listed to the Endangered Species Act (ESA).

Late Friday, the Dept. of the Interior (DOI) quietly announced Sec. Sally Jewell would be making an “important conservation announcement” in regards to the “bi-state” population of greater sage grouse on Tuesday, April 21 2015, in Reno, Nevada. The bi-state birds live only in Nevada and California and fewer than a meager 5,000 are thought to remain.

A court-ordered decision was expected by April 28, 2015 on whether U.S. Fish and Wildlife Services (FWS) had decided to list the bird as threatened, endangered, or not list the bird at all. A decision by FWS on the greater sage grouse, living throughout the west, is expected by the end of September.

Although DOI wouldn’t comment on which direction the agency was taking, others close to the process indicated a listing isn’t likely.

The strategy to keep the bird off the Endangered Species List (ESL) was the partnership created through the Sage Grouse Initiative (SGI), a network spanning 11 states and consisting of government and nongovernmental agencies, conservation districts, private corporations and landowners, colleges and universities as well as land trusts. These groups have been working on land conservation and “restoration” projects, often backed with millions of dollars in federal funding.

Bryan Masini, owner of the Sweetwater Ranch in Nevada, is scheduled to speak at Tuesday’s announcement. Masini’s ranch, south of Lake Tahoe, was one of the original partner ranches of SGI.

Listing the bird would be “adversarial” Masini told EnviroNews.

During a phone interview Masini said listing the bird would derail the current process. Some of the projects on Masini’s 4,150 acres include conservation easements, fencing, juniper and pinyon removal, and range management.

Katie Fite, biologist and board secretary with the Idaho-based Defenders for Wildlife, said not listing the bird sends the wrong message.

“It says that Interior is not serious,” Fite said.

To get real results Fite believes bold steps need to be taken to curtail cattle grazing and energy development.

“What’s happening with sage grouse is a testament to the failure of the conservation movement in America right now,” Fite said.

Hottle called sage grouse the “biggest conservation issue of our generation,” and said the effort by such a large, voluntary group of stakeholders to work on the issue was unprecedented.

With so much money being spent participation in SGI shouldn’t be such a surprise. In February, the United States Department of Agriculture (USDA) released a report indicating spending on sage grouse projects would top $750 million by 2018 “conserving” 8 million acres of habitat.

Roughly $425 million in government and private money has already been spent and USDA will kick in another $200 million over the next four years. Additional government agencies and private pledges will provide $130 million more for projects.

Much of the money expended so far has been on private and occupied rangelands. According to the SGI’s website, “approximately 25 percent of occupied range contains 75 percent of sage grouse. Private lands are the primary focus, with partnership projects on public lands as well.”

Projects, such as protecting and restoring wet meadow and riparian areas from grazing are likely needed but other projects are criticized as costly and unnecessary, like removing trees from millions of acres of rangeland.

Removal of juniper and pinyon trees from the landscape is argued as an effective way to reduce habitat and cover for sage grouse predators. Fite says the practice simply opens up more grazing lands, is unnecessary and ineffective.

According to FWS, which determined the greater sage grouse was a candidate for ESA protection, the bird depends on a variety of “shrub-steppe” habitats and is considered an “obligate user” of several sagebrush species. Adults rarely move between habitats once they have settled into an area, so the importance of not disturbing their areas is very important.

In addition to depending on several varieties of sagebrush, greater sage grouse also need large swaths of contiguous sagebrush areas to survive and thrive.

Populations of the greater sage grouse continue to decline as well, and in the early 1900s estimates as high as 16,000,000 birds were recorded. According to FWS, in 2010 that number was believed to be between 100,000 and 500,000 birds. In 2007, the number had dropped slightly lower, and still the trend line has not increased.

Even with sage grouse populations not rebounding, those involved in SGI are adamantly opposed to ESA listing and governmental regulation.

Richie said even if the sage grouse aren’t listed now, the bird could be listed in the future, if conservation efforts don’t work and that motivates the partnership to make progress.

When, or if that “progress” will reflect an increase in sage grouse numbers is still unknown.