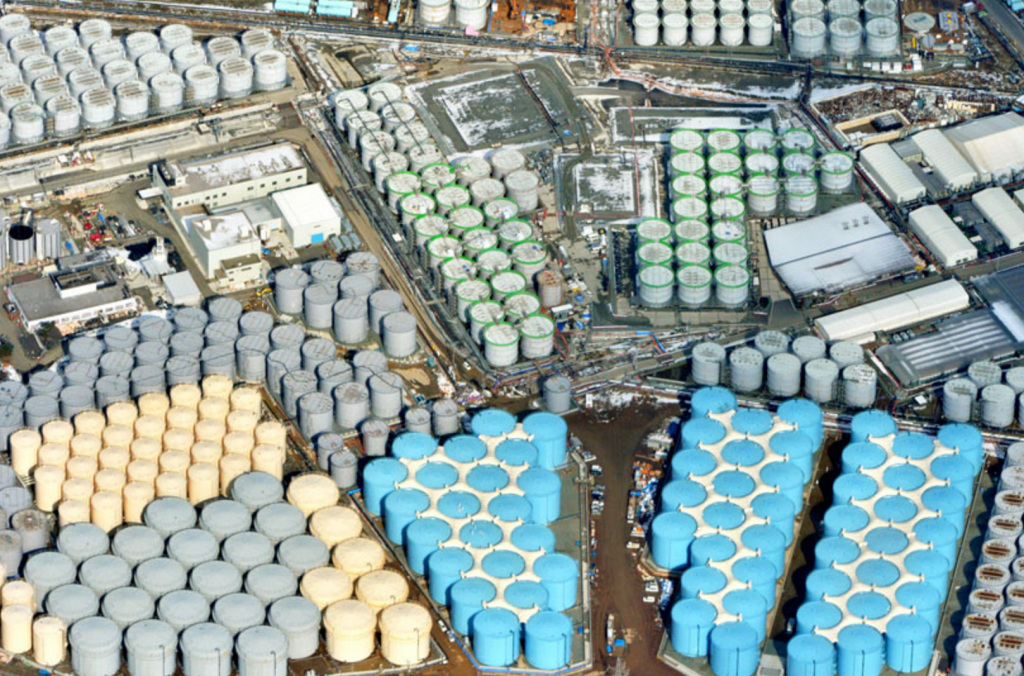 (EnviroNews World News) — A new photo released this week starkly demonstrates how severe the radioactive water storage crisis on the ground at Fukushima Daiichi really is. Published in The Asahi Shimbun, the aerial photo shows a scene resembling that of a “giant integrated circuit board” comprised of colored holding tanks, where nearly all available flat ground and parking lot space is now consumed by the pileup.

According to a count taken on February 12, 2016, there are now a total of 1,106 massive radioactive tanks onsite — and reports from the ground say the operator is fast running out of space.

The overseer of the facility, Tokyo Electric Power Company (a.k.a. TEPCO), has constructed the tanks in an effort to contain deadly radioactive water from leeching into the sea and surrounding environment, and the company has plans to construct 20 more tanks to house an additional 30,000 tons of radioactive water projected to be released throughout the remainder of 2016.

The Asahi Shimbun reports that since that majority of flat land is already consumed by storage tanks, TEPCO has no other choice than to build the new receptacles in the “narrow alleys between the huge containers.”

The pileup of radioactive water has been a festering problem at the crippled plant which is only five years into the cleanup and decommissioning phase — a process projected to take half-a-century or more.

TEPCO has already been forced to vomit massive amounts of isotope-laden water to the Pacific on several occasions — moves that have worried and outraged people around the world.

Japan dumps thousands of tons of radioactive water into sea

It is also important to note that TEPCO is attempting to decontaminate water, and has been dumping that H2O back into the ocean already. Of concern is that no technology exists to adequately remove the radioactive element tritium from water. So, even though the operator is removing certain isotopes, the water going back out to sea is still radioactive.

To few people’s surprise, Japanese officials are claiming the water is decontaminated to “safe” levels, while forgetting to mention that medical science has long ago firmly established there is no known safe amount of radiation to be exposed to — period. Even the smallest exposure can lead to cancer down the road.

The first of these massive dumps took place on September 14 of last year, when 850 tons of water was let loose back into the Pacific. That water contained 330 to 600 becquerels per liter of tritium according to TECPCO and a third party tester. Many additional releases of this nature are planned for the near future — a strategy intended to put a damper on the radioactive pileup.

TEPCO also faces another radioactive water problem. Groundwater has been making its way into and below the crumpled reactor buildings, and has in turn been leaking and leaching full-blown, plutonium and uranium-containing water into the Pacific on a continual basis since the onset.

Fukushima’s Radioactive Water Leak: What You Should Know

TEPCO is still attempting to complete a frozen barrier of earth around the reactor buildings to prevent groundwater from flowing in and becoming contaminated — this, after an earlier attempt to create a frozen “ice wall” of seawater failed.

The plan recently received approval from Japan’s Nuclear Regulatory Authority, and reports from the ground say TEPCO could start freezing earth around the reactor buildings as early as next month.