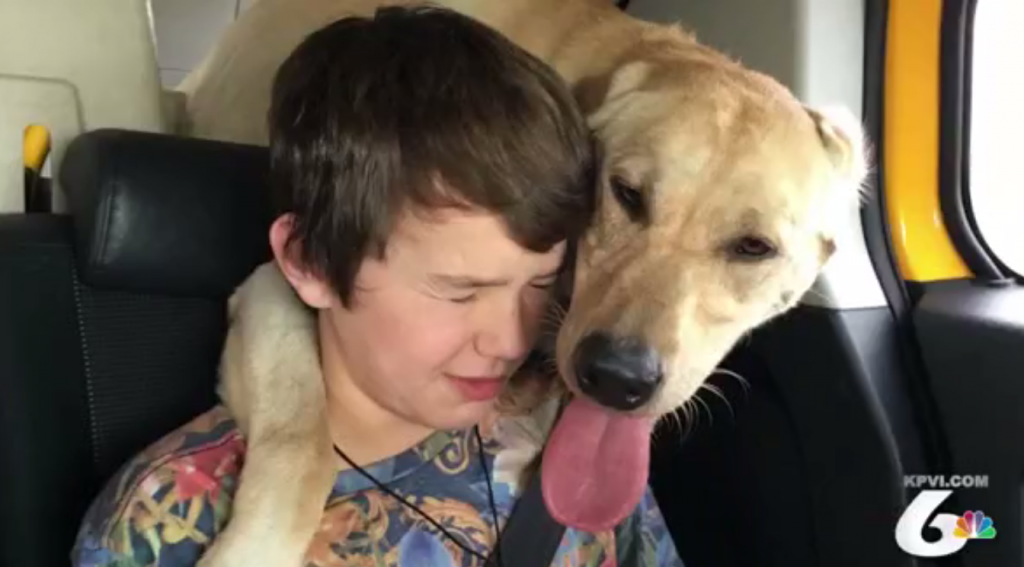 (EnviroNews Headline News Desk) — Bannock County, Idaho — On March 16, 2017, 14-year-old Canyon Mansfield was playing fetch with his dog Kasey, in Bannock County, Idaho, when an M-44 cyanide bomb sprayed him and killed his dog. The lethal device was placed by the U.S. Department of Agriculture’s (USDA) wildlife management program, Wildlife Services (WS), in an effort to kill local predators such as coyotes (Canis latrans). As reported by EnviroNews, Wildlife Services killed 1,594,595 animals native to the U.S. in 2016 and 1,681,283 in 2015.

Canyon and Kasey were on a ridge in the Buckskin area, 10 minutes from their home on Buckskin Rd. The M-44 was unmarked and the youth described it to KPVI as “this little pipe sprinkler type thing,” which, when he touched it, spewed orange gas. Canyon cleaned himself with snow and saw his canine companion was “mumbling” and then started having seizures. By the time Canyon got home, his beloved pet had died. Kasey was a 3-year-old yellow labrador retriever and a champion hunting dog. The Mansfield family was evaluated and released from a local hospital.

The parents were understandingly disturbed when speaking with KPVI, and Canyon’s mother, Theresa Mansfield, clarified there was no sign, posting or mail notification given to the local community about this deadly and easily triggered ground weapon. While grieving their family dog, they are grateful their son survived; “basically, Kasey saved Canyon’s life,” she said. Canyon’s father, Mark Mansfield, urges his neighbors to stay vigilant and “beware.”

The USDA released a statement to KPVI expressing regret for the incident and explaining agency policy is to post signs and notify the local community when using these devices. It has now removed M-44s from the area. The deadly gadget was banned under President Nixon in 1972 but reinstated during the Reagan years.

Fox 13 News in Utah reported on March 21 that M-44s were banned on all federal lands in Idaho in 2016, meaning the bomb was actually “illegal” to begin with.

“The Bannock County Sheriff’s Department verified by phone with [us] that GPS coordinates for the M-44 involved in the incident place the device on Bureau of Land Management (BLM) land, despite a decision banning the use of these devices on federal public lands,” said Erik Molvar, Executive Director of Western Watersheds Project, in a press release. “It never should have been there at all.”

On March 20, Bannock County Sheriff, Lorin Nielsen, told the Idaho State Journal, “based on the amount of calls we have received during the course of our investigation, I plan on meeting with officials with the USDA and demand the practice of using these devices ceases in Bannock County.”

The best available science demonstrates that randomly killing coyotes actually leads to increased populations (it triggers compensatory breeding, so while for a short time the population decreases, in the long run it increases) and higher likelihood of conflict with livestock. M-44s are unnecessary, horribly dangerous and cruel. Many effective nonlethal tools for reducing the likelihood of conflict exist and should be prioritized, including range riders, solar powered electric fencing, livestock dogs, flaggery (flagging) and more. Many ranchers peacefully coexist with coyotes and report no conflicts.

Unfortunately, this is not an isolated M-44 incident. Earlier in March, a family in Wyoming lost two of its four dogs to cyanide bombs while out on a day trip on the prairie where they often walked. They later used a GPS device to determine they had unknowingly entered unmarked private lands at the time. Along with four adults, an 8-year-old child witnessed the dogs’ painful deaths. Predator Defense has compiled stories of other M-44 tragedies on its site.

WildEarth Guardians’ Executive Director John Horning said of Wildlife Services in a statement, “this taxpayer-funded program is waging an endless war on wildlife on our public lands and the list of non-target casualties continues to escalate,” pointing out that 39 domestic dogs were killed in 2016.

WildEarth Guardians has been a powerful opponent to Wildlife Services and in 2016 won a landmark case requiring it update and improve its wildlife eradication program’s environmental assessment (EA) methodology. WildEarth Guardians’ “End The War on Wildlife” campaign aims to increase public awareness and support for its mission to protect U.S. native species from unnecessary slaughter.

Horning characterizes this incident as negligent and not accidental, and says indiscriminate killing tools like M-44s, traps and poisons must be removed from public lands and Wildlife Services must “instead pursue a new mission of nonlethal coexistence with native wildlife while also addressing the proliferation of non-native species that are a threat to native wildlife and healthy ecosystems.”