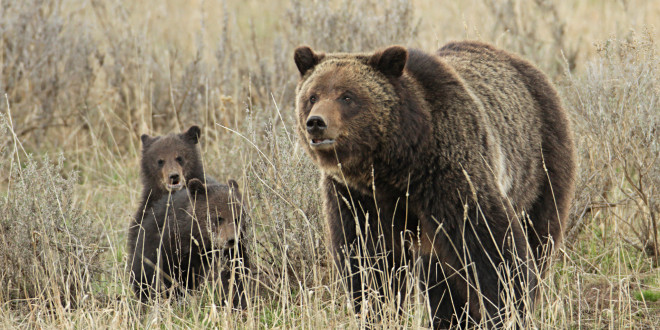 (EnviroNews Wyoming) — Yellowstone National Park — It was a sobering outcome for social media activists who had been clamoring to #SpareTheBear. Despite the tumult on Twitter and fury on Facebook, Yellowstone Park managers were undeterred.

The park announced from the beginning, it would euthanize the mama grizzly that attacked and partially ate a hiker last week — and although Yellowstone’s Facebook page was inundated with posts begging park managers to rethink its decision to kill the 15-year-old female known as “Blaze,” none of the over 20,000 comments changed the minds of park managers.

To be sure, not all of the comments were against the park’s decision — some recognized the dilemma Yellowstone faced. And to its credit, Yellowstone officials tried their best to explain the decision and responded to many comments. That responsiveness seemed to assuage the anger of many upset activists:

Perhaps it was posts such as the one below, that helped calm many upset social media protesters, while eliciting some much-needed sympathy for the park’s plight:

Dear Facebook friends,This has been a difficult week.In the field of wildlife conservation, there is nothing harder…

Not everyone, however was buying the Park’s remorse:

In the end, park officials plugged their ears to the hashtag howls:

If I surprise a mama grizzly with cubs and she eats me..please do not kill the bears. Let me live on as bear energy. #Yellowstone #grizzlies


They overlooked the letters, and paid no attention to the petitions imploring the park not to euthanize the bear:

Please sign this petition to #Yellowstone or, once again, a wild animal will be destroyed due to human carelessness. https://t.co/O9QchngaSe

Instead, once DNA confirmed the 259-pound grizzly was the bear that killed 63 year old Lance Crosby, officials turned a blind eye to the posts and petitions and turned a tranquilizer gun on Blaze. Once the 15-year-old grizzly mama was heavily sedated, they fired a captive bolt into her skull.

“How could they?” asked activists (especially angry, after it was revealed the hiker had wandered off-trail and was not carrying bear spray — nor had he taken any other precautions before venturing into known bear territory).

Ultimately, the frantic Facebook posts were fruitless. Even calls to Montana Governor Steve Bullock, asking him to intervene in the death penalty case of a killer bear, fell on deaf ears.

Officials say they would not have put the animal down had the attack been a defensive move to protect the cubs. Instead, the animal was euthanized because it had eaten part of the Montana man’s body and hid the rest — which is not normal behavior for a female bear defending its young, spokeswoman Amy Bartlett told the AP.

A press release from the park, suggested the attack was predatory, and not completely defensive behavior. As proof, officials pointed to the fact that the bear partially ate the body, then hid it off-trail—covering it with leaves and pine needles — so, it seemed the animal’s intent was to return and continue feeding. “The decision to euthanize a bear is one that we do not take lightly”, said Dam Wenk, Superintendent of Yellowstone National Park in a statement a few days before they killed Blaze. “Our decision is based on the totality of the circumstances in this unfortunate event,” continued Wenk.

For protestors, the park added insult to lethal injury when it announced mama bear’s two orphaned cubs would be leaving the wide-open spaces of Yellowstone for the enclosed cages of an Ohio Zoo.

Yellowstone implied the baby bears are actually lucky, because upon examination, it was determined that both cubs had also fed on the hiker’s body — and leaving them to roam the park with the taste of human flesh fresh in their memories would have been too dangerous.

Park Spokeswoman Amy Bartlett said they would have euthanize the cubs too had a zoo not stepped in to offer the baby bears a home. “Cubs can adapt to a facility much easier, and there is no danger of them learning humans are food,” Bartlett said.

Crosby, who worked as a nurse in the park’s Lake Village area was the sixth person killed by grizzlies since 2010 in and around Yellowstone. According to the National Park Service there are between 674 and 839 grizzly bears roaming Yellowstone and nearby areas of Montana, Idaho and Wyoming.

Officials can’t be sure the exact number, but for certain there will be three fewer. The bear cubs will arrive at the Toledo Zoo in the next month or two. In the beginning the Zoo says the cubs will be quarantined and kept out of the public eye for awhile in order to acclimate to life there.

Sometime after 30 to 60 days, the cubs will be moved to an existing empty exhibit. The zoo isn’t sure how long it will be until the cubs are ensconced in their permanent home, but a zoo official told the Washington Post, “We are very fortunate that it’s two, so they have each other to play with.”

Many are sympathetic to posts like Ronda Carrick’s above. With their mother now dead and only a life behind bars to look forward to, the zoo’s remark that “at least the cubs will have each other” barely seems much of a bright side.